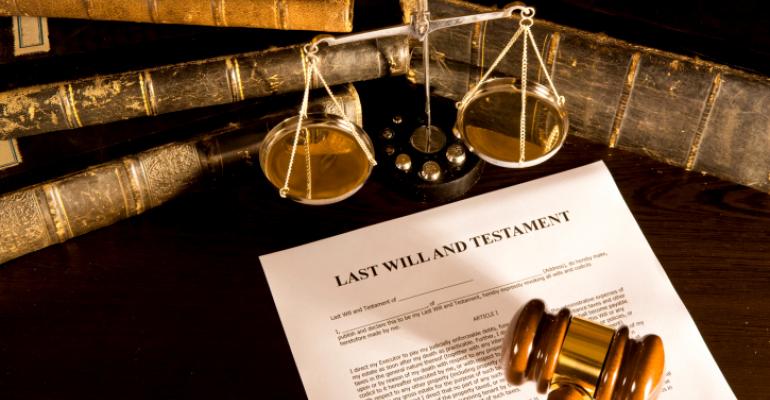 Even if its unsigned, undated and unwitnessed

Here’s one to ponder.  A decedent died in 2010, with siblings as her only heirs.  No executed will could be located.  Brother #1, the proponent, alleged that his sister executed a will in 1991 and that nothing could be found revoking it.  Brother #2, the contestant, contended that the will was never valid and the sister died intestate.  Brother #3 testified he found a one-page will at his sister’s house shortly after her death, but could recall virtually nothing about it, except that it was signed by his sister and two witnesses and that he gave it to Brother #2, who said he was thinking about destroying it.

Attorney Thorne was called and testified that he drafted a will for the sister in 1991, but he didn’t remember it being executed and had only an unsigned copy in his files.  This will left everything to Brother #1, the proponent.  He did testify that it was the practice of his office to have secretaries act as witnesses and the attorney be the notary.  His theory was the sister must have executed the will because, otherwise, the unexecuted original (presumably on better paper or a blue back) would still be in the file with the unsigned copy.  He also testified that the sister paid her bill.

Brother #3 further testified that his sister had shown him yet another will approximately six months before she died.  According to him, this will also left everything to Brother #1, but wasn’t either the document the lawyer had a copy of or the one page will he gave to the contestant.  Brother #3 took nothing under any of the alleged wills.

Only the lawyer’s unsigned, undated, unwitnessed copy was produced at trial.  The trial court admitted it to Probate based on the lawyer’s testimony.  On appeal, the contestant claimed that, by statute, the admission of a lost will requires, at a minimum, the testimony of at least one attesting witness.  He also claimed he was denied his due process rights because the court clerk made him turn his hearing aid down due to its interference with the court’s microphone system.  Thus he couldn’t hear and was denied the right to confront the witnesses.  Finally, he claims that the judge should have recused himself because he was Thorne’s law partner in 1991 when the wll was allegedly executed in their office.

Any predictions so far?  The appellate court affirmed.  Even though the attorney couldn’t remember the execution and only presumed he must have notarized it, the court accepted this as fact based on his testimony about his office practices.  Further, according to the court, under the right circumstances, a notary can testify as an attesting witness.  So what have we got?  An unsigned, undated, unwitnessed copy of a will is admitted to probate by the drafting attorney’s former law partner judge on the strength of that attorney’s testimony that it would have been his practice to notarize it if it was, in fact, ever executed.  It would seem difficult to flunk this test.  The usual presumption that a will has been revoked when it can’t be found and was known to be in the testator’s possession apparently doesn’t apply here.

The court gave no weight to the hearing aid claim because the contestant was represented by counsel who presumably could hear the witnesses.  Finally, although the contestant claimed he didn’t discover the relationship between the drafting attorney and the trial judge until after the trial, the appellate court refused to consider it because it was raised for the first time on appeal.  Estate of Valcarce, ____ P.3d ____ (Utah App. 2013) 2013 Westlaw 1686303.