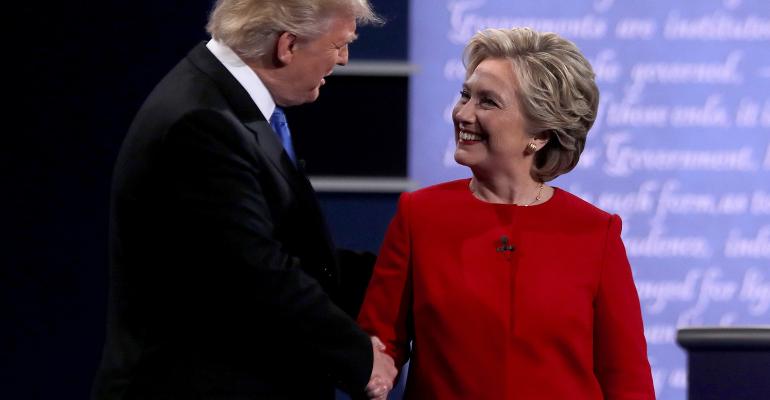 When It Comes to Estate Tax, Clinton and Trump Surprisingly Agree

At first glance, it seems we have two polar opposite estate tax plans. Trump wants to repeal the estate tax and Clinton wants to pointedly increase it from where it is today. But a closer look at each plan reveals one striking commonality.

Clinton joined President Barack Obama and other Democrats in proposing to restore the estate tax to 2009 parameters ($3.5 million exemption). Last month, she borrowed a page from Senator Bernie Sanders' (D-Vt.) estate tax playbook when she abandoned her previous proposal for a 45 percent top estate tax rate in favor of taxing estates of individuals as follows: over $10 million at 50 percent; over $50 million at 55 percent; and over $500 million at 65 percent.

Like President Obama, Clinton also vows to close the “step-up in basis loophole” that lets accumulated capital gains go untaxed when appreciated assets are passed on to heirs. Instead, her plan will treat bequests as “realization events,” forcing immediate income taxation of any built-in gains. Purportedly, Clinton’s plan will include exemptions to ensure the change only affects high-income families. Moreover, her plan is proffered to contain protections and flexibility for small and closely held businesses, farms and homes, and personal property and family heirlooms.

Still, the one-two transfer tax punch could hit high-income-earning and affluent families hard. In addition to a 65 percent top estate tax rate, consider that Clinton’s top marginal tax rate for capital gains assets held less than two years could be 47.4 percent (39.6 percent marginal tax rate + 3.8 percent net investment income tax + 4 percent surtax on incomes over $5 million). If her proposals were enacted into law, this punitive combination could produce a top marginal transfer tax rate in excess of 80 percent—the highest of any industrialized nation in the world!

Joining many Republicans before him, Trump has consistently campaigned on ending the unpopular death tax. Until last month, however, he had been mum on the viability of also retaining the step-up in basis for appreciated assets that are inherited.

At this time, Trump plans to repeal the death tax, but capital gains held until death and valued over $10 million would be subject to tax (small businesses and family farms exempted). Furthermore, to prevent abuse, contributions of appreciated assets into a private charity established by the decedent or the decedent’s relatives will be disallowed.

As proposed, the Trump plan, like Clinton’s, is short on a number of important specifics. The plan doesn't mention whether the $10 million exemption is per individual (likely $5 million) or per married couple. Additionally, one is left to assume that when the death tax is repealed, it likewise repeals the gift and generation-skipping tax too. Last of all, if death taxes are to be repealed in their entirety, then there need be an inferred carry-over basis on inherited appreciated assets that will result in a capital gains tax only upon a future realization event. If that’s not the case, there would be a deemed disposition tax on the asset’s appreciation similar to Clinton’s plan, but at a much reduced capital gains tax rate of 20 percent for assets which have been held for more than one year.

For his part, Trump appears to be following in the footsteps of former presidential candidate Jeb Bush’s estate/capital gains tax tradeoff and away from House Ways and Means Committee Chairman Kevin Brady's (R-Texas), whose bill (H.R. 1105) in 2015 called for a repeal of the estate tax, but kept the stepped-up basis intact.

Is the Stepped-Up Basis Slip-Slidin' Away?

Surprisingly, both Mrs. Clinton and Mr. Trump agree on doing away with the step-up in basis for inherited assets. However, they may differ on the timing of the realization of gain (Clinton at death; Trump possibly at a future disposition). It’s worth noting that in some cases, and depending upon the then-existing top capital gains tax rate, the loss of the step-up in basis for a highly appreciated asset could be more onerous than the estate transfer tax on the same asset.

For example, let’s assume that a parent leaves a capital asset (such as stock, real estate, etc.) to their children that is valued at $1 million on the date they pass away and the adjusted cost basis of the property is $100,000. The $900,000 of capital gains tax imposed on a disposition during decedent’s life wouldn’t have to be borne by the children upon inheritance. The children will only be responsible for gains that might occur from the point they inherit the asset until the time the asset is sold.

While a carry-over cost basis was codified into law in 1976, it was later repealed in 1980 due to the administrative nightmares in actually determining what the carry-over basis was. Today, however, we may be better equipped to handle the challenge of tracking basis. After all, advancements in modern technology now make it easier for estates to calculate carry-over basis, particularly in the area of investment assets. Computers and quarterly investment statements readily provide clients with cost basis information. Similarly, the Internal Revenue Service already has an individual’s annual taxable gain and/or loss from the sale of marketable securities in its database.

Yes, our administrative world would become more cumbersome if the step-up in basis were no more. But keep in mind, the world didn’t blow up in 2010 when the executor of a decedent could elect to use the modified carry-over of basis rules (inheritors could receive up to $1.3 million in stepped-up basis and the surviving spouses could add an additional $3 million). Moreover, Canada, which has had no estate or gift tax, has not fallen off the fiscal cliff for failing to track the cost basis in deemed dispositions (as though the donor/decedent sold the property for its fair market value) in taxing assets for income tax purposes on transfers to heirs.

Still, weren’t matters surrounding our tax transfer tax system supposed to have largely been put to rest back in 2012?

ATRA’s Provisions—Permanent or Gone With the Wind?

While ATRA’s provisions were stated to be "permanent," perhaps this meant that its provisions would not automatically sunset to the less favorable provisions of the Economic Growth and Tax Relief Reconciliation Act of 2001.

Although the exemption and tax rate were to have been set in permanent tax law, bills like H.R. 1105 have been introduced to eliminate the death tax. Transfer tax plans like Clinton’s and Trump’s seek to further dismantle ATRA’s longevity.

Regardless of one’s political persuasion, good tax policy requires predictable tax provisions to allow people to plan their financial/estate affairs properly. When the near-term outlook of any tax law is wildly uncertain, it makes proper planning next to impossible.

As we approach the end of the year things could get a bit bumpy. Neither Clinton’s nor Trump’s proposals stand much chance of succeeding in their present form. The Republicans presently control Congress, but the Democrats can block their action in the Senate.

Clinton, who currently leads in the polls, promises to close complex loopholes, including methods that people can now use to make their estates appear to be worth less than they really are. She believes that there’s essentially a “private tax system” for the wealthiest Americans that lets them lower their tax bill by billions, while working families play by the rules and pay their fair share.

Presumably, such complex loopholes might include the Treasury’s proposed regulations under Internal Revenue Code Section 2704, where the Treasury seeks to significantly curtail almost all minority (lack of control) discounts in transferring closely held entity interests, including active businesses owned by a family. But do such “complex loopholes” include a qualified personal residence trust, a technique that the Clinton family availed themselves of for their Chappaqua home back in 2010?

Will the political horse trading ultimately result in the repeal of the death tax in exchange for the loss of the step-up in basis for inherited property? Might a more enduring choice between an estate tax or capital gains tax—mirrored after 2010—be a better compromise for farmers and small business owners rather than forcing them to pay either or both taxes? Perhaps the optionality of an estate tax or a carry-over in basis would be a more prudent plan to encourage capital formation during one’s lifetime.

It appears that planners will be busy in an estate tax world that continues to be divergent and unpredictable. Maybe that’s one more thing that Clinton and Trump might actually agree upon.