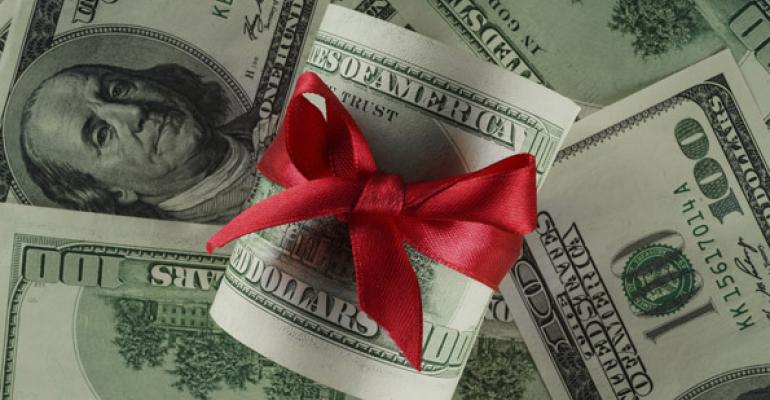 In Private Letter Ruling 201650005 (released Dec. 9, 2016), a grantor requested several rulings from the Internal Revenue Service regarding distributions from an irrevocable trust. While the IRS deferred ruling on whether the grantor was the “owner” of a trust, the IRS did rule that certain property contributed to the trust by the grantor wasn’t a completed gift, and distributions by the distribution committee members were likewise incomplete.

A grantor created an irrevocable non-grantor trust for his benefit, as well as for the benefit of his spouse, mother and his issue. The grantor had two children who were minors. There was also a distribution committee, consisting of the grantor, his mother, guardians of each of the minor children and potential “eligible individuals.” Should a vacancy on the distribution committee arise, the trust provided for certain steps to be taken to fill the vacancy.

Is the Grantor the “Owner?”
The grantor asked the IRS about which portions of income, deductions and credits should be part of this taxable income while the distribution committee was serving. Internal Revenue Code Sections 671-678 describe when a grantor of a trust will be treated as its owner, including if there’s administrative control exercisable primarily by a grantor rather than by a beneficiary (IRC Section 675). The IRS concluded that there were no circumstances that would cause the grantor to be treated as the owner of the trust as long as the distribution committee remained in existence, and the trust remained a U.S. person. The IRS also concluded that there was an issue of fact regarding whether there were circumstances that existed that would cause administrative controls to be considered exercisable primarily for the grantor’s benefit under Section 675. These factual issues could only be determined after the IRS examined the parties’ federal income tax returns; thus, the IRS deferred issuing a ruling on this issue until such examination occurred.

The grantor requested two rulings regarding completed gifts, and the IRS ruled that in both instances, the gifts weren’t complete for federal gift tax purposes.

Under IRC Section 2511(a), a gift tax applies whether a transfer is made in trust or not; whether a gift is direct or indirect; and whether property is real, personal, tangible or intangible. When a donor parts with dominion and control of a gift so as to leave him no power to change its disposition, a gift is complete (Treasury Regulations Section 25.2511-2(b). But, if a donor retains any power over the disposition of property, depending on the facts of the transfer, a gift may be wholly incomplete or may be partially complete and partially incomplete. Thus, “in every case of a transfer of property subject to a reserved power, the terms of the power must be examined and its scope determined,” stated the IRS.

Under Treas. Regs. Section 25.2511-2(b), a transfer is incomplete when a donor transfers property to another in trust to pay income to himself or accumulate it, and the donor retains a testamentary power to appoint the remainder among his descendants. The Treasury regulations state, however, that if the donor doesn’t retain a testamentary power of appointment (POA) and instead provides that the remainder should go to his heirs or someone else, the transfer is a completed gift.

If a grantor has a reserved power to name new beneficiaries or change the beneficiaries’ interests, a gift is incomplete under Treas. Regs. Section 25.2511-2(c). In this instance, the grantor had a sole power over the trust principal, which gave him the power to change the beneficiaries’ interests. Although the power was limited by an ascertainable standard (health, education, maintenance and support), the grantor’s power wasn’t a fiduciary one. Thus, the retention of the grantor’s sole power caused the transfer of property to the trust to be wholly incomplete for federal gift tax purposes.

The grantor also retained a testamentary power to appoint the property in trust to persons other than to his creditors, estate or creditors of his estate. A retention of a testamentary power to appoint a trust remainder is a retention of dominion and control over the remainder, according to Treas. Regs. Section 25.2514-3(b)(2). Thus, retaining this power caused the transfer of property to the trust to be incomplete as it related to the remainder in trust for federal tax purposes.