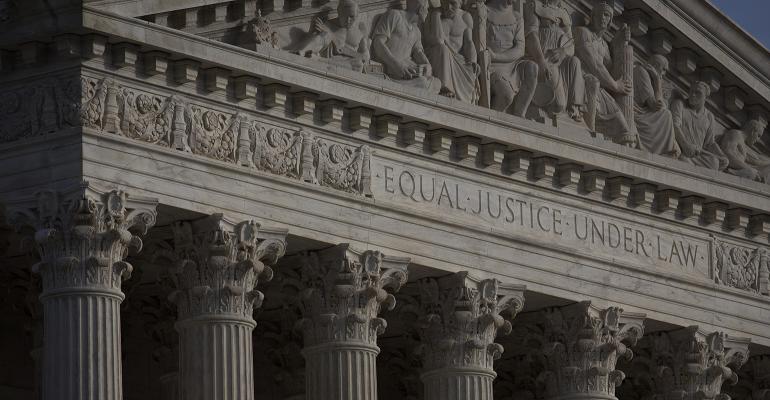 Whose minimum contacts count for due process purposes?

A state’s ability to tax trust income was before the U.S. Supreme Court on April 16 when it heard oral arguments in the case of North Carolina Department of Revenue v. Kimberly Rice Kaestner 1992 Family Trust. The due process clause of the 14th Amendment to the U.S. Constitution allows a state to tax those who have minimum contacts with the state. At issue in Kaestner is whose minimum contacts count for due process purposes. North Carolina takes the position that a trust is for the sole benefit of its beneficiaries, thus it’s the minimum contacts of the beneficiaries that are most important for purposes of the 14th Amendment. Twenty states filed with the court to urge that the North Carolina position be adopted because to do otherwise would not only rob many states of revenue—27 states tax trust income based on a settlor’s or beneficiary’s residence, not the trustee’s residence—but also create what amounts to a uniform standard for trust taxation that would infringe on state sovereignty.

Not so fast, says the taxpayer. If a beneficiary has no right to the undistributed income of the trust, then it can’t be the beneficiary’s minimum contacts that are important because the beneficiary has minimal, or no, possession or control over the income. Instead, says the taxpayer, it’s the trustee who’s in charge of the trust, and it’s the trustee’s minimum contacts that matter for trust taxation. The taxpayer’s position is supported by a multitude of tax organizations and trust and bank associations.

The parties agree that when a beneficiary in a given state receives income distributions, or has the right to compel an income distribution, the state has the right to tax that income. It’s the undistributed income, whether ordinary or capital gains, that poses the question. In Kaestner, the trust beneficiaries were all North Carolina residents, no distributions were made, and the trust was administered in New York by trustees who weren’t residents of North Carolina.

Ascertaining the court’s likely ruling from listening to the oral argument is difficult even for those who are regular listeners and professional readers of tea leaves. But some impressions are clear.  Justice Kagan was unpersuaded that a beneficiary isn’t really the key person even if not receiving income currently; she noted that two people in North Carolina, each making $100,000 but one of whom has a $20 million trust, are in different positions. On the other hand, Justice Ginsberg interrupted the North Carolina solicitor general after he uttered three sentences of his argument to say “ … you couldn’t tax the beneficiaries on that accumulated income when they haven’t received it?” Later on Justices Sotomayor and Breyer seemed definitely of the same view.

California has a throwback tax that other states have generally eschewed. Some observers have suggested after the oral argument that the Court is likely to issue a narrow decision holding that a state may not tax the undistributed income of a trust absent a connection with the trustee, assuming no source income attributable to that state. Such an opinion would leave open the door for a state to adopt a throwback rule that could tax the undistributed income of a trust whenever it was finally distributed to a beneficiary. In such a scheme, left for another day would be the question of whether a beneficiary who lived in the state when the income was earned by the trust, but out of the state when the beneficiary received the income, could be taxed by the state, although the premise of minimum contacts on its face would suggest that the beneficiary would need to be domiciled in the state when the distribution were made.

Kaestner may prove to be a Pyrrhic victory of sorts: a victory for the taxpayer but a loss for trust beneficiaries overall. Almost every state faces budget difficulties if not outright crises. Many of those states could generate more revenue if they adopted throwback rules that would tax beneficiaries—eventually—even if not today. A road map in Kaestner might produce that result.  Naturally, trustees, trust beneficiaries and their counsel will react to such developments, and we could expect to see more efforts to create beneficiary-deemed owner trusts and other strategies to have income taxed in friendly states.