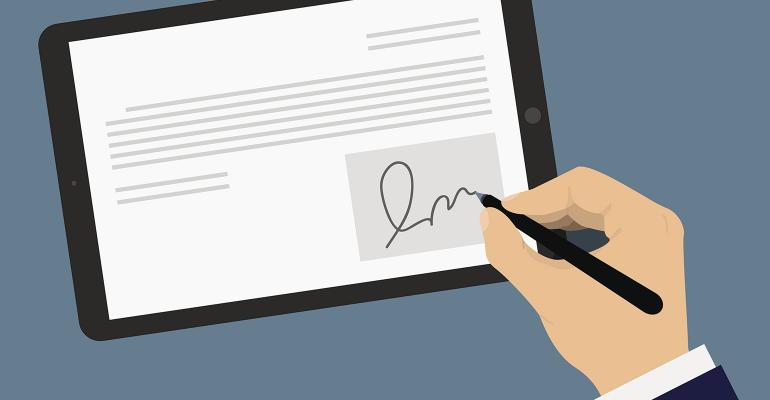 States will have to decide which provisions to incorporate into their laws.

The Uniform Law Commission (ULC) approved in July 2019 the Uniform Electronic Wills Act (the E-Wills Act). The E-Wills Act translates traditional wills act formalities—writing, signature, and attestation—to allow a will to be written in an electronic medium, electronically signed and electronically validated. The Act and accompanying information are available on the website of the ULC (www.uniformlaws.org).

Why all the fuss over e-wills? In a nutshell, we bank, shop, communicate and even read valuable estate-planning publications all online, so we can be expected to demand legal services online. Some potential testators may want to do everything themselves, but many others are delighted to meet with a lawyer once, but after that would rather execute their wills at home, whether because of illness, urban gridlock, geography or inertia.

The E-Wills Act was drafted against a backdrop of existing case law. In the best-known case, In re Estate of Castro, No. 2013ES00140 (Ohio Ct. Common Pleas Prob. Div., Lorain County June 19, 2013), Javier Castro dictated a will to his brother, who wrote the will on a Samsung Galaxy Tablet. Javier then signed the will on the tablet, using a stylus, and two witnesses signed on the tablet. The probate court held that the electronic writing on the tablet met the statutory requirement that a will be “in writing.” The court admitted the will to probate because it had two witnesses as required by Ohio law, although it wasn’t self-proving because there had been no notary. The court had little difficulty expanding traditional will law to cover a different medium, here an electronic tablet. In other contexts, e-wills written or recorded on electronic devices, without witnesses, have been validated in states with harmless error statutes. See, for example, In re Estate of Horton, 925 N.W. 2d 207 (Mich. Ct. App. 2018).

Some find it surprising that e-wills aren’t already covered by statutes authorizing electronic transactions. For instance, the Uniform Electronic Transactions Act (UETA), promulgated in 1999 and adopted in almost all states, allows parties to sign bilateral commercial contracts electronically but excludes wills from its scope. UETA Section 3(b). The E-Wills Act fills the gap left by UETA.

An e-will can be in an electronic medium, rather than paper, but must be text when signed by the testator. A testator may dictate a will, but a program must transcribe that dictation before it’s signed to be a valid e-will. The concerns have been that issues of proof and preservation of oral-only records would be too much for the legal system to adapt to now and that oral or video wills are less likely to represent the thoughtfulness we would like to see from testators. Time will tell whether that’s timid or sensible.

The E-Wills Act retains the requirement of witnesses but allows a state to require that the witnesses be physically present or to relax that requirement by allowing the witnesses to be remote and present only by video and audio means. Some states are likely to embrace remote witnesses while other states run as far away as possible! In the next few years, we should begin to have empirical evidence of whether remote witnesses are boon or folly to buttress our various unsupported instinctual reactions.

Most traditional wills today are “self- proving,” meaning that the witnesses have not only signed the will but also have signed an affidavit before a notary public, swearing that the will was properly signed and witnessed. The contents of the self-proving affidavits vary from state to state; the E-Wills Act reflects the one in Uniform Probate Code (UPC) Section 2-504. Although the UPC and many non-UPC states permit the affidavit to be signed at any time after the will, the E-Wills Act requires that it be executed simultaneously with an e-will. This means that the self-proving affidavit will be incorporated into the e-will document itself.

States that reject remote execution of e-wills may seek to reject probate of any remotely witnessed e-will, even those validly executed in other states by individuals who then move to the rejecting jurisdiction. We believe that’s short-sighted and bad policy that deviates from traditional wills recognition law, and the E-Wills Act hopes to discourage that restrictive policy. A traditional will that’s valid where the testator is physically located when it was signed is typically given effect under the law of the state in which the testator is domiciled at death. Why should an e-will be different? A testator who creates a valid will in a state that permits remote execution will likely be caught unawares if that will is of no effect when the testator moves to a new state that doesn’t allow remote witnesses. A rule that imposes intestacy on that testator seems like poor policy.

The E-Wills Act provides that e-wills, like traditional ones, can be revoked effectively by physical act or a subsequent will or codicil. Physical act revocation of e-wills may be hard to prove, and the ULC drafting committee considered not permitting revocation by physical act at all, but realized that many people would assume that they could revoke their wills by deleting them from a storage medium. The E-Wills Act requires proof that revocation was intended by a preponderance of the evidence, the same as is required when proving proper execution and attestation.

Trusts and estates practitioners seem divided into two camps: those predisposed to maintain centuries-old traditions and formalities and those who view electronic wills as an inevitable part of the technological evolution. The former argue that abuse is more likely, that disputes are more likely and that lawyers will be eliminated from the will process if we allow an all-electronic process. The latter view the future as electronic and are unconcerned about the risk that remotely witnessed wills will be harnessed for the purposes of evil. The E-Wills Act allows a state to accommodate either set of practitioners, just not at the same time!