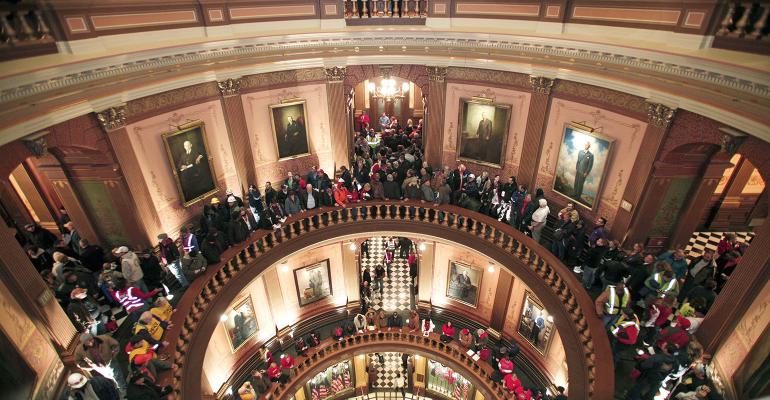 Smart move or falling for the long con?

The saga of the Uniform Voidable Transactions Act (UVTA) has taken an interesting turn as, in March 2017, two additional state legislatures passed it: Michigan and Utah. These states now join California, Georgia, Idaho, Iowa, Kentucky, Minnesota, New Mexico, North Carolina and North Dakota. Given the purported added protection for creditors’ rights, adoption of the UVTA isn’t, in and of itself, surprising. What raises eyebrows concerning Michigan and Utah’s respective passages are that they’re the first UVTA states that also have enacted domestic asset protection trust (DAPT) statutes.

Marketed as a revised act to protect creditors’ rights, the UVTA’s impact expands beyond the scope of debtor/creditor law and reaches out into other areas of legal practice, the most notable of which involves high net worth estate planning. Throughout the pages of Trust & Estates and on Wealthmanagement.com, much has been written about the dangers of the UVTA when applied to commonly used estate-planning techniques.1

The UVTA’s effect on estate planning can be summarized by four distinct issues: asset substitution, entity formation/conversion, state homestead law and DAPTs. I previously suggested that, while a “connect the dots” analysis is necessary to fully understand the UVTA’s reach with respect to asset substitution, entity formation/conversion and homestead laws, no such analysis is needed with respect to DAPTs. A primary goal of the UVTA is to eradicate the use of DAPTs as an estate-planning strategy.

States that adopt DAPT legislation provide a forum for their residents to preserve their hard-earned assets against future, unknown creditors. While many consider DAPTs to be subversive and a way for creditors to legally avoid their debts, such an argument ignores the application of a particular DAPT state’s fraudulent (or voidable) transfer law. A common provision across all DAPT legislation is a provision that if a debtor creates a DAPT with the intention of defrauding a particular creditor, the property transferred into the DAPT is attachable as to that creditor.2 With the creation of new Section10 to the UVTA (the governing law section) and the addition of certain official comments to Section 4 of the UVTA, the Uniform Law Commission is advocating that any transfer to a DAPT is voidable if the transferor’s home jurisdiction hasn’t enacted DAPT legislation. Specifically, the seventh paragraph of new Comment 8 to Section 4 of the UVTA (the “anti-DAPT provision”) provides: "By contrast, if Debtor’s principal residence is in jurisdiction Y, which also has enacted this Act but has no legislation validating such trusts, and if Debtor establishes such a trust under the law of X and transfers assets to it, then the result would be different. Under § 10 of this Act, the voidable transfer law of Y would apply to the transfer. If Y follows the historical interpretation referred to in Comment 2, the transfer would be voidable under § 4(a)(1) as in force in Y."

Traditionally, certain states, such as Alaska, Delaware, Nevada, South Dakota are known as “asset protection” states; not coincidentally, these are the states at the forefront of the DAPT legislation. In an effort to entice their respective residents to maintain their assets within their home state instead of sending them to a traditional asset protection state, 13 other states have adopted DAPT legislation. Interestingly, the most recent state to pass DAPT legislation is Michigan, where the Michigan Qualified Disposition in Trust Act3 became effective as of March 8, 2017.

With such a proliferation and growth in acceptance of DAPT legislation, and considering the negative impact of the UVTA, why then would a DAPT state adopt the UVTA? Until 2017, no DAPT state had done so. Now, with both Michigan and Utah becoming both UVTA and DAPT states, the question becomes whether the two sets of laws are reconcilable with each other.

At least as to in-state DAPTs, it would appear that the two provisions can work together. If a Michigan resident created a DAPT in Tennessee in 2016, and a subsequent creditor of said resident attempted to attach a judgment to the DAPT, the respective courts would have been faced with a conflicts-of-law analysis. While the Michigan court would argue that the debtor’s transfer was in violation of Michigan fraudulent transfer law, the Tennessee court would argue that such an analysis is irrelevant because Tennessee authorizes DAPTs, so unless the provisions of Tenn. Code. Section 35-16-104(a) apply (which is a transfer in violation of Tennessee’s Uniform Fraudulent Transfer Act), Tennessee isn’t bound by what the Michigan court determines. If the above transaction occurred after March 8, 2017, by applying the Michigan UVTA, it may be argued that the Michigan resident’s transfer to the Tennessee DAPT is per se voidable. However, applying the first sentence of the anti-DAPT provision, if the debtor instead created a Michigan DAPT, the anti-DAPT provision wouldn’t apply because the transfer was to a DAPT within the same state (that is, Michigan).

The problem with this analysis is that, as stated above, DAPTs are only one estate-planning technique affected by the negative ramifications of the UVTA. While it may have been the intent of both the Michigan and Utah legislators that the interaction of the two laws would be an incentive for the creation of in-state DAPTs, the passage of the UVTA now opens the door to the other detrimental implications of the UVTA, that is, the issues regarding asset substitution, entity formation/conversion and state homestead laws.

While it’s too late for Michigan and Utah, legislators in other states where the UVTA is being considered must be educated on the dangerous implications of the UVTA and must either not pass the UVTA or legislate around such implications.