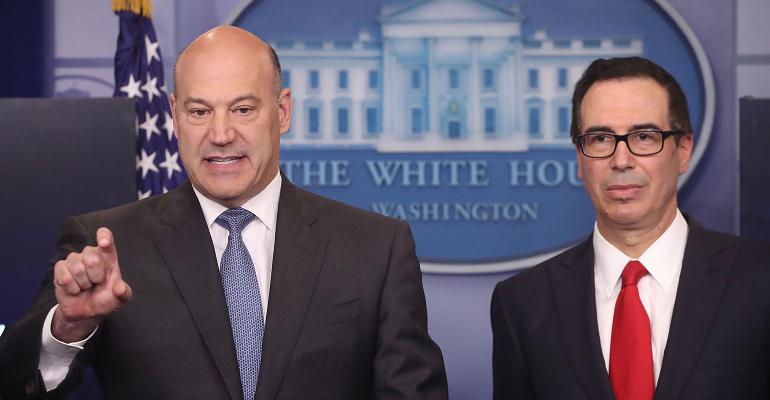 By comparison, the first draft of President Ronald Reagan's tax reform was three volumes and 500+ pages.

(Bloomberg) --The “ phenomenal” tax plan that President Donald Trump promised 11 weeks ago appeared at a White House briefing Wednesday: It was a one-page list of bullet-points that amounted to fewer than 250 words.

The document was largely devoid of detail, including on whether the proposed cuts for businesses and individuals would increase the federal deficit. The answer to that question may determine whether Trump’s recommended 15 percent corporate tax rate -- a huge cut from the current 35 percent -- would be permanent or temporary.

The points that the tax outline did include -- calls for slashing business taxes, eliminating the alternative minimum tax and the estate tax, cutting individual income-tax rates and repealing an investment-income tax for high earners -- amount to a conservative wish-list from the past several years. Separately, any one of them could provoke a titanic fight.

But the most immediate controversy is likely to focus on cost. The Committee for a Responsible Federal Budget released a rough analysis saying the plan could cost $3 trillion to $7 trillion over the next decade -- potentially “harming economic growth instead of boosting it.”

White House Budget Director Mick Mulvaney dismissed cost estimates of the plan on CNBC Thursday saying: “There’s no way to score what we put out yesterday.” He added: “This was general principles, what’s important to us” and a package designed to get the U.S. economy to 3 percent growth.

Treasury Secretary Steven Mnuchin said during a White House briefing to roll out the plan Wednesday that it would lead to rapid economic growth, helping to cover the cost of the cuts -- but many tax experts disagree. “No tax cut has ever been self-financing,” wrote Howard Gleckman, a senior fellow at the Urban-Brookings Tax Policy Center, in an online post Wednesday.

Other tax experts who would normally jump to analyze the plan were foiled by the scant specifics. “Sorry, friends. We cannot model this. Definitely not enough detail,” Kyle Pomerleau, director of federal projects for the Tax Foundation, said in a Twitter message. Len Burman, a fellow at the Urban Institute, was more pointed: “First draft of Reagan tax reform: three-volume 500+ page treatise. First draft of Trump: bullet points.”

If the one-page outline seemed hastily assembled, it was. Some Treasury officials found out that a plan would be made public Wednesday only after Trump announced his intentions last Friday, promising “massive” tax cuts. The Treasury staffers and counterparts from the White House then rushed to prepare a presentation with enough viable talking points to satisfy Trump’s expectations, while keeping it open-ended enough to leave room for further consideration, said a person familiar with the matter who asked not to be named because the discussions were private.

More than 100 Treasury staff members are working on the tax plan, Mnuchin said. Yet, as he and Trump’s top economic adviser, Gary Cohn, made clear Wednesday, much work remains.

Asked how Trump’s plan would affect a family of four making $60,000 a year, Cohn said: “It’s going to be a tax cut.” Pressed for specifics, he said: “We will let you know the specific details at the appropriate moment.”

In general, for individual income taxes, the plan calls for reducing the current seven tax rates to just three: 10 percent, 25 percent and 35 percent -- but it doesn’t include the income thresholds associated with those rates. That makes it impossible to determine the revenue cost of the changes. “We are moving as quickly as we can,” Mnuchin said.

U.S. stocks, which have hit record highs since November partly due to the expectation of business-friendly tax changes, reversed course and erased daily gains on Wednesday. The Standard & Poor’s 500 Index halted a two-day rally.

Republican congressional leaders greeted the announcement coolly, with an emailed statement that said the bullet-points would serve as “critical guideposts” in what’s expected to be a months-long effort to overhaul the U.S. tax code.

Whether the eventual legislation aims for a deficit-neutral tax plan -- one that balances its cuts with new revenue -- will be a major question. Trump’s list of tax principles was immediately assailed by Democrats, who say it would blow out the federal deficit.

“It’s clearly fiscally reckless and it’s a massive tax cut for the richest,” said Chuck Marr, the director of federal tax policy at the Center on Budget and Policy Priorities, a Washington policy group that focuses on measures to fight poverty. He called Mnuchin’s suggestion that growth would pay for the tax cuts “pure fantasyland.”

“The claim that his multitrillion-dollar tax cut will pay for itself is as incredible as the claim that Mexico will pay for his multibillion-dollar border wall,” said Representative Lloyd Doggett, the leading Democrat on the House Ways and Means Tax Policy subcommittee. Before the announcement, Senate Democratic Leader Chuck Schumer said his party would oppose any plan that provided tax breaks for the highest earners.

Trump and others have pitched the plan as a middle-class tax cut -- and it would aid lower- and middle-class families by cutting individual tax rates and doubling the standard deduction.

But it also calls for eliminating the estate tax, which currently applies only to estates valued at more than $5.49 million for singles or $10.98 million for married couples. And it would repeal a 3.8 percent net investment income tax that applies to individuals with incomes above $200,000 a year. Cutting the top individual tax rate and setting the top rate for partnerships and other so-called “pass-through” businesses would also benefit high-income taxpayers. Mnuchin said the White House aims to offset any reduction in high earners’ tax rates by “significant reduction of deductions.”

“If the president’s plan is to give a massive tax break to the very wealthy in this country -- a plan that will mostly benefit people and businesses like President Trump’s -- that won’t pass muster with we Democrats,” Schumer said Wednesday morning on the Senate floor.

Without Democratic help, Republicans would have to seek a simple-majority vote on the eventual legislation -- a procedure that would prevent any of the measure’s provisions from adding to the deficit outside the normal 10-year federal-budgeting window. Economists have said the sorts of cuts Trump wants would do just that. If so, the cuts would have to be set to expire -- perhaps within three years, based on a finding by the congressional Joint Committee on Taxation.

Settling for temporary tax cuts instead of lasting changes would be “an underperformance” from House Republicans, said Peter Roskam, an Illinois Republican and member of the tax-writing House Ways and Means Committee. Senate Majority Whip John Cornyn, a Texas Republican, was cautious in his remarks.

“I like low tax rates, but I don’t know how we pay for it,” he said. “That’s the question -- and what the other provisions are going to be.”

The plan that Mnuchin and Cohn unveiled Wednesday does allude to one major revenue-raiser: It would scrap the federal-income tax deduction that individuals can claim for the state and local taxes they’ve paid. Repealing that deduction would be worth as much as $1.3 trillion over the next decade, based on an analysis by the Urban-Brookings Tax Policy Center, a Washington policy group.

The deduction mostly benefits high earners in high-tax states that tend to vote Democratic; the largest beneficiaries are California, New York and New Jersey -- all relatively high-tax “blue” states. Conservatives favor eliminating the deduction, which they’ve called a federal subsidy for high taxes at the state and local levels.

Trump had been silent on the issue until Wednesday. His support was already stirring some dissent in his own party, however. Representative Leonard Lance, a New Jersey Republican, had praise for portions of Trump’s plan, but said he’ll oppose the state-and-local deduction.

“I will be a leading voice in negotiations for maintaining that deduction,” he said.