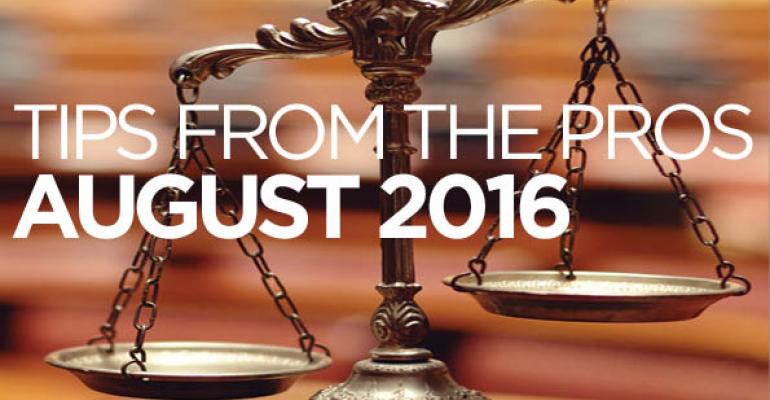 Today, the estate planner needs to master two new protocols that didn’t exist three decades ago, when I started my law practice. In 1984, even with a Jules Verne-like imagination, it would have been hard to conjecture about these two new items. But, both are critical to managing client expectations and avoiding mistakes.

1. Effectively dealing with the Inbox; and

2. A workable electronic calendaring system for filing and follow-up dates.

This month, I’ll focus on the Inbox.

The practitioner can scour the literature for advice on how to deal with the Inbox, but for the estate planner, there’s been no effective article or written advice. Because more so than attorneys in other practice areas, estate planners are family advisors, confidantes and problem solvers, the Inbox tends to accumulate quite the volume of incoming traffic.

The volume of emails and expectation on responsiveness is far greater than in any other practice area, and discipline is critical to managing the Inbox and the clients’ expectations.

Email is critical to effective handling of matters and clients. It can’t be ignored, dealt with by an assistant or considered secondary to any other client communication.

The volume of emails is and will increase.

It’s critical in the world of client maintenance and allows for effective, efficient and important client communications.

For every phone call to a client, 10 emails can be sent (that’s a made-up number, of course, but emails to phone communication is at least 10:1 in terms of speed).

For every verbal malaprop during a phone call, a carefully reviewed and edited email can help planners avoid embarrassment.

For every phone call that should be made and isn’t because of time interference, an email can be sent in its place.

Emails can easily provide status follow up and advice to clients.

And, often clients prefer emails versus calls because, like you, they don’t want to waste their time on the phone.

It’s a given, then, that we’ll be communicating with clients via email (and texts, which create another venue time drain), and to do so properly, we have to manage the Inbox correctly.

The Inbox is, to use the government security reference, a “TSA.” But in this case, it’s not a device to protect your professional security, rather one that interferes with your time management (“TSA” in this case refers to a “time sucking abyss”). If a practitioner receives 100 emails a day or more, how is it possible to get through all of them?

Here are seven rules to live by that will minimize the TSA aspects of the Inbox. Iterations to these rules are fine, as long as each concept is followed:

1. Empty your Inbox. This is the most difficult to follow. You can’t carry 300 to 400 messages in your Inbox and expect nothing to fall through the cracks. Emails need to be read and responded to; then stored and removed. Each day, your Inbox won’t be zero, but no more than 50 to 100 emails should ever be in your Inbox.

2. Read an email only once and react to it. If it’s an easy question, such as “Let’s schedule a meeting,” then do so. Don’t open and close the message and say, “I’ll do it later.”

If the email requires time to respond to, for example, a substantive question of law that requires thought and patience or a request to find a document, put the matter in motion. Send it to an assistant to handle, or think about when you’ll do it and move it to that time. You can’t let the question sit because it will get buried, possibly unanswered, and will require a second bite of the mental apple.

For example, say you get a question dealing with the income tax status of a credit shelter trust that needs a bit more thought. When are you going to work on it? If two days from now, then you need to take two actions: (1) let the client know the question was received and will be answered in a couple of days, and (2) calendar the question to be reviewed by you in two days, at a certain time. (Various strategies exist to calendar, but that’s for another article.)

3. Calendar and store. Move email out of the Inbox after it’s acted on (that is, the first time it’s opened). If you or a third party will act on the email, calendar a follow up and then store the email.

4. No matter how fatigued you are, once you open an email, act on it. One action that isn’t used enough is hitting the delete button.

5. Hit the delete button when necessary. Any time that you read an email that’s not particular to a client or doesn’t require a substantive response, but seems interesting to you or something “you want to read later,” hit the delete button. There’s too much volume of interesting material now, and the reality is that an email being interesting is no longer a variable to be used in saving it for later cogitations.

Repeat the following mantra—“Emails are our nemesis, they must be dealt with and dismissed.” In looking in on people, rarely do I see them laughing or smiling when dealing with their emails. Emails are business and should be treated as such.

6. Reduce the amount of email traffic you receive. Discuss with colleagues and friends when to copy you on or send you emails. Friends who send you “jokes” by email, well, do we really need that to detract our attention during the day and to clutter our already cluttered Inbox?

7. Delegate. In terms of acting on an email on opening, always keep in mind that delegation is the goal. You can do so with an effective calendar system. Thinking about who can act on an email takes us back to the importance of calendaring follow up. Back in the old days, we would have our list of actions on a yellow pad and follow up that way. But, that list now has been expanded 10 times, so follow up is no longer the stuff of yellow pads. You need technology storage and answers to follow up, and follow up tasks should be calendared.

Use these techniques to help reduce the Inbox to a trend towards zero emails being collected. In this Lexicon, of course, zero means any amount less than 100, but the goal is to have as few emails when you leave the office as possible.

And if you’re still unconvinced, try the following mental inquiry: Tell me the substance of 10 emails you sent last week. I bet most of us can’t even think of two without a lot of concentration.