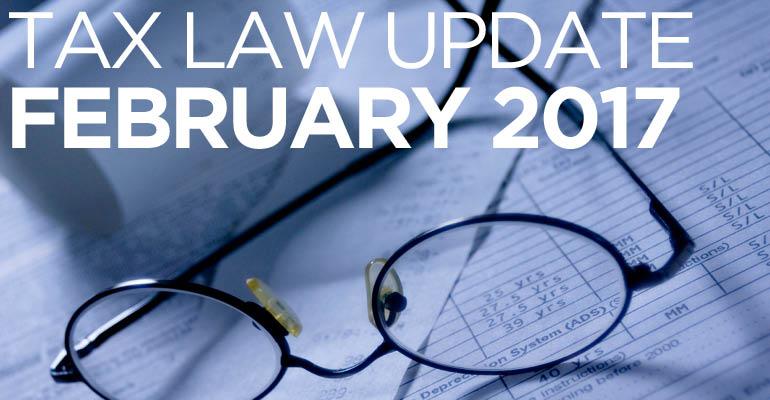 David A. Handler and Thomas Norelli highlight the most important tax law developments of the past month.

In 2016, the IRS released Revenue Procedure 2016-49, which provided updated procedures to disregard qualified terminable interest property (QTIP) elections in situations in which the QTIP election wasn’t necessary to reduce estate tax liability to zero. If the QTIP election qualifies to be disregarded under the revised revenue procedure, you can notify the IRS by writing “Filed Pursuant to Revenue Procedure 2016-49” at the top of Form 709 and attaching the information described in the revenue procedure to the return. The instructions direct you not to request a private letter ruling.

To claim a deceased spouse’s unused estate tax exemption (DSUE), you no longer attach the entire Form 706 filed by the deceased spouse’s estate. The new instructions advise you to attach only the first four pages of the Form 706 filed by the estate, as well as: (1) any attachments related to the DSUE that were filed with Form 706; and (2) calculations of any adjustments to the DSUE amount “like audit reports or previously filed Forms 709.” Because the use of the DSUE on previous gift tax returns is detailed on Schedule C, page 4 of the current return, should the new instructions be interpreted to require attaching all prior Forms 709 on which DSUE was previously used? The wording of the instructions and format of the Form 709 remain unclear, so it’s advisable to file all prior Forms 709 that adjust DSUE along with the current return.

Lastly, the IRS will no longer accept checks of $100 million or more. This change will likely have little immediate practical effect, as it would be largely inadvisable to make such a large gift in the face of currently prevailing uncertainty surrounding tax legislation.

• PLR permits addition of tax reimbursement clause—In PLR 201647001 (released Nov. 18, 2016), Grantor 1 and Grantor 2 created an irrevocable grantor trust for the benefit of their children. Due to unforeseen circumstances, payment by the grantors of the income taxes on the trust became unduly burdensome.

The trustee sought court approval to modify the trust, including a modification allowing the trustee, in his discretion, to reimburse the grantors for tax liability either of them might incur because part or all of the trust’s income was reportable by him to the trust’s status as a grantor trust.

This clause was in conformance with Situation 3 of Revenue Ruling 2004-64. That ruling states that a reimbursement clause won’t cause inclusion of the value of the property of a trust in the settlor’s gross estate under IRC Section 2036, even when the trustee exercises his discretion to make the reimbursement, so long as this isn’t done by pre-arrangement. The disbursement won’t be deemed pre-arranged if there’s no express or implied agreement between the settlor and the trustee regarding the trustee’s exercise of his discretion. Also, the trustee must be independent, as the trustee was here.

The IRS held that the foregoing modifications to the trust were administrative in nature, complied with the requirements of the revenue ruling and didn’t result in a deemed transfer of any property by the grantors or their children for federal gift tax purposes. Furthermore, the foregoing modifications wouldn’t result in the inclusion of any trust property within the gross estate of the grantors or their children under Section 2036.

On the release of the proposed regs, many voiced concerns that they included a deemed put right. The proposed regs create a new category of “disregarded restrictions” that apply to restrictions on one’s ability to force the liquidation or redemption of an interest in the entity. Many have interpreted these disregarded restrictions as effectively providing that entity transfers will be valued as if the transferred interest had a deemed put right to sell the interest to the entity at any time on six months’ notice if the “family” had the ability to cause a put right to exist. Under this interpretation, the proposed regs would significantly reduce, or eliminate, lack of control discounts for transfers of interests in family-controlled entities.

Catherine Hughes, attorney-adviser at the Treasury Office of Tax Legislative Counsel, has stated that the notion that the proposed regs include a deemed put right is misinformation or a misunderstanding.1 “I defy you to find in the [notice of proposed rulemaking] as published a deemed put right,” Hughes stated. “It isn’t there.”2 Hughes has stated that the government is working to correct this misinformation and “will do our best to clarify it and make things crystal clear, whether it’s in the preamble or we think the reg text has to be changed.”3 Such clarification would likely eliminate much of the consternation that many have felt regarding the proposed regs.

Leslie Finlow, branch 4 senior technician reviewer, IRS Office of Associate Chief Counsel (Passthroughs and Special Industries), offered an example to illustrate how the proposed regs are intended to work. Finlow said that a partnership that holds a portfolio of marketable securities, has a partnership document that’s silent on partnership liquidation rights and is subject to state law that’s also silent on partnership liquidation rights wouldn’t have disregarded restrictions under the proposed regs. In this scenario, an appraiser would take into account discounts for lack of control and marketability.4

However, an otherwise identical situation that involves a partnership document providing that proceeds from the liquidation of a partner’s interest are paid in the form of a note with a 20-year term is a disregarded restriction. The restriction would be ignored under the proposed regs, and an appraiser should reach the same result as the former example.