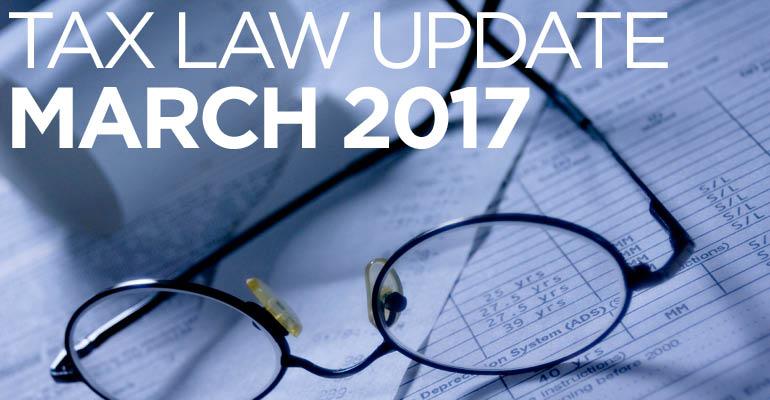 David A. Handler and Thomas Norelli highlight the most important tax law developments of the past month

•The $250 billion price tag associated with gift tax repeal—Estate and gift taxes have been an integral part of the U.S. tax regime for almost a century. However, over the course of the past two decades, there have been repeated overtures for their elimination. Now, with the advent of a new presidential administration, repeal of the estate and gift tax appears to be more likely than ever before.

The loss of income tax revenue would be the product of income tax saving strategies that would become viable in the wake of gift tax elimination. For example, without a gift tax, the use of a “straw taxpayer” would likely become a prevalent income tax planning strategy. One could freely transfer appreciated or income-producing assets from a taxpayer in a higher bracket to a taxpayer in a lower bracket without imposition of gift tax. This strategy would enable the higher bracket taxpayer to accumulate income or capital gains subject to the lower bracket taxpayer’s lower marginal rates. Of course, the step-transaction doctrine could apply in some cases, but proper tax planning and timing would make it difficult for the Internal Revenue Service to detect such a strategy and succeed in imposing the step-transaction doctrine.

Absent a gift tax, taxpayers could gift assets to their elderly parents or other relatives to obtain basis step-up on death.

Elimination of the estate tax would also reduce income tax revenues, assuming basis step-up is retained. As taxpayers make lifetime transfers of wealth to avoid estate tax (whether using gift exemptions, sales, grantor retained annuity trusts and the like), the transferred assets don’t obtain a step-up at the donor’s death. The reduction of estate tax revenue from lifetime wealth transfers is partially offset by the loss of step-up, but without an estate tax, taxpayers would retain significantly more assets until death and receive a step-up. And, the taxpayers making wealth transfers are generally the ones with the largest unrealized gains.

It’s clear that if Congress wishes to maintain the integrity of the progressive income tax, then the gift tax needs to be retained in some form. If Congress were to eliminate the transfer tax regime altogether, the economic consequences to the federal government could be immense.

• IRS issues guidance on applicable exclusion amount and generation-skipping transfer (GST) tax exemption for same-sex spouses—To apply the U.S. Supreme Court decision in United States v. Windsor and Revenue Ruling 2013-2017, the IRS has issued Notice 2017-15. This notice outlines administrative procedures for taxpayers and their estates to recalculate the remaining applicable exclusion amount and GST tax exemption to the extent that an allocation of that exclusion or exemption was made to certain transfers while the taxpayer was married to a person of the same sex.

If a taxpayer made a gift to his same-sex spouse prior to Windsor and the limitations period with respect to filing an amended return hasn’t yet expired, then the taxpayer may file an amended gift tax return or supplemental estate tax return to claim the marital deduction (if it would have qualified) and restore the applicable exclusion amount and GST tax exemption allocated to that transfer. However, if the limitations period has expired, pursuant to Notice 2017-15, the taxpayer can recalculate his remaining applicable exclusion amount as a result of the recognition of the taxpayer’s same-sex marriage as if a marital deduction applied. Importantly, Notice 2017-15 doesn’t permit the change in value of the transferred interest or any other change in position concerning a legal issue after the limitations period has expired. Additionally, no credit or refund of tax paid on the marital gift can be given after the expiration of the period for credit or refund.

Following Windsor, generation assignments of a same-sex spouse and that spouse’s descendants made for GST tax purposes are established based on the familial relationship between the same-sex spouses and not their age difference. Regardless of whether the Internal Revenue Code Section 6511 limitations period has expired, if a taxpayer had previously allocated GST tax exemption by filing a return or by operation of law before the date Notice 2017-15 was issued, and such transfer was based on a same-sex spouse’s age-based generation assignment, the exemption allocated to such transfer is void. Therefore, the taxpayer is permitted to restore GST tax exemption allocated to transfers that were made for the benefit of transferees whose generation assignment subsequently changed pursuant to the Windsor decision, such that such transfer was now deemed to be made to a non-skip person.

• State supreme court forces portability election—In In re Matter of the Estate of Anne S. Vose v. Lee, 2017 OK 3 (Okla. 2017), the Oklahoma Supreme Court affirmed the district court’s holding that required the personal representative of a decedent to make a deceased spouse’s unused exemption (DSUE) election. The surviving spouse had requested the personal representative to make the portability election, but the surviving spouse  had also waived all of his rights to the decedent’s estate in a prenuptial agreement.

The court held that “the IRS itself acknowledged that the question of what state law actions might bring a surviving spouse within the definition of executor pursuant to 26 U.S.C.A Sec. 2203 are outside the scope of its regulations,” thereby acknowledging the interplay between state laws concerning probate and estate distribution and federal estate tax provisions. Furthermore, 26 U.S.C.A. Section 2010 grants the personal representative a choice, and the statute as a whole is silent as to the effect state laws might have on how the administrator must make that choice. Therefore, the court held that preemption didn’t apply, and as a result, the district court wasn’t deprived of subject matter jurisdiction.

An Oklahoma statute provides that standing in a probate proceeding generally requires a pecuniary interest in the estate of the deceased. The court reasoned that because the portability election may give the surviving spouse a pecuniary interest, he had standing.

The Oklahoma Supreme Court found no reversible error and affirmed the district court’s holding that required the personal representative of a decedent to make a DSUE election.