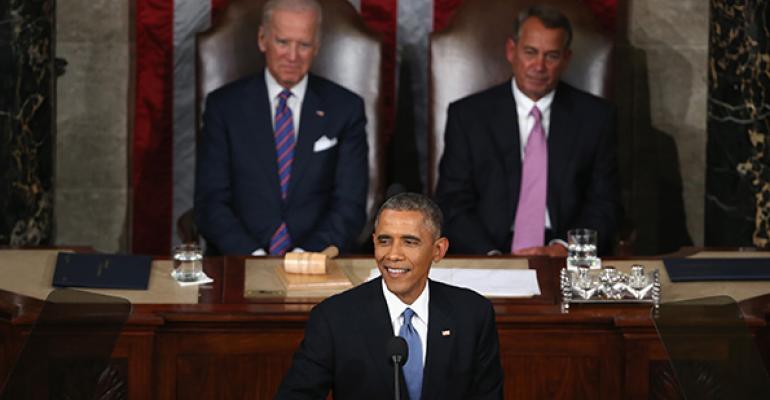 Is the “Step-Up” Stepping Down?

A potential sea change in how inheritances are taxed

When President Obama delivered his State of the Union Address last month, no doubt every estate-planning attorney in the country sat up and took notice when he proposed ending the “step up” provision in the capital gains tax.  If Congress agrees (a big “if”), it could mean sweeping changes in how inheritances are taxed—and how estate attorneys help their clients deal with that.

The president’s proposal would eliminate a significant tax benefit in the treatment of inheritances.  The plan would tax capital gains on the decedent’s basis, instead of the current system that allows a step-up in basis for assets passed on to heirs.  The change, if enacted, would have wide-ranging effects on many families—making it much harder to shield assets from taxes.  To do so would require a great deal more planning and a lot of help from estate-planning attorneys and accountants.

The president says that his proposal closes what he calls “the trust-fund loophole” and will ensure that the wealthiest Americans pay their fair share on inherited assets.  But, in reality, this term is a misnomer (in fact, it would result in more assets being funneled to trusts—but more on that later).  And the proposal would impact more than just the rich. To put it simply, it’s essentially a brand new tax on inheritances that would take money out of the pockets of beneficiaries and result in a host of unintended consequences.  For example, heirs would need to determine the original cost basis for all of the assets they inherit.  Think about that. That means every share of stock, every piece of property and every valuable would need to be traced back to the original cost. That would be a nightmare.

But before we get into the details about what the proposal would mean, let’s look at an example of how the current step-up rules work.  Say your client bought shares of GE stock 15 years ago for $500.  At the time of his death, that stock is worth $2,500. That represents a gain of $2,000 that your client has paid no taxes on.  If your client had left those shares of GE stock to one of his children, his child’s cost basis would be $2,500. That means that whenever his child sells the stock, she’ll only owe tax on capital gains that accrue over the $2,500 cost basis.  However, under President Obama’s proposal, any capital gains, if not exempt, over the original $500 he paid would be taxed.

The president’s plan does allow married couples to bequeath investment assets with capital gains up to $200,000 tax-free.  Further, a couple can bequeath a home to a child, and $500,000 in capital gains wouldn’t be taxed.  (The amount that can pass without tax is half for individuals.)  However, even with these exemptions, the elimination of the step-up” can put a large financial burden on some heirs.  Though the proposal isn’t clear on how the tax would be implemented, the bill may be due on the death of the parents, reducing what transfers to the children and potentially putting a significant economic burden on a transferred business.  This impacts estates and families that may have far fewer assets than the current federal estate exemption of $5.43 million, because it significantly broadens the tax base and the type of tax applied.

As for eliminating what the president refers to as “trust-fund loophole”?  In reality, trusts would actually expand.  Without the step-up provision, many beneficiaries would need to set up trusts to protect their assets from the increased taxes.  It’s no surprise that, in this scenario, trusts become much more appealing.  A donor can transfer assets to the trust. This way, when he dies, his death wouldn’t be a taxable event.

The end of the step-up could also affect your client’s other big life decisions. With the estate exemption currently at $5.43 million, planning what to keep or gift to minimize capital gains taxes is a large part of the conversation.  Since most estates will never be as large as the exemption, it’s the capital gains tax that will come into play.  Your client can sell and pay the tax while he’s alive; or, if his appreciated assets exceed $200,000 ($500,000 for a home), he can have it taxed on his death.  As a result, the biggest unintended consequence of the president’s proposal is that elimination of the step-up provision could negatively impact heirs who don’t necessarily fall into the “rich” category.

There’s a double whammy if your client lives and works in a place like the Washington, D.C. area, or some other high cost-of-living area.  First, your client doesn’t have to be “rich” to have assets above the exemption in lives in an area where houses cost so much, and second, congratulations, your client’s estate will be taxable even if he doesn’t have assets in excess of $5.43 million.

A Step-Up in Business

When and if the step-up provision goes away, it’s likely that estate-planning attorneys’ phones will start ringing as an ever-increasing pool of people looking for ways to preserve their assets seek advice.  Estate planning will become more complicated than ever, and professional advice to devise a smart strategy that maximizes what they’re able to pass along to their loved ones will become a priority.  I have no doubt many of us will become very busy looking for ways to protect our clients’ assets—and keep both them and their heirs happy.