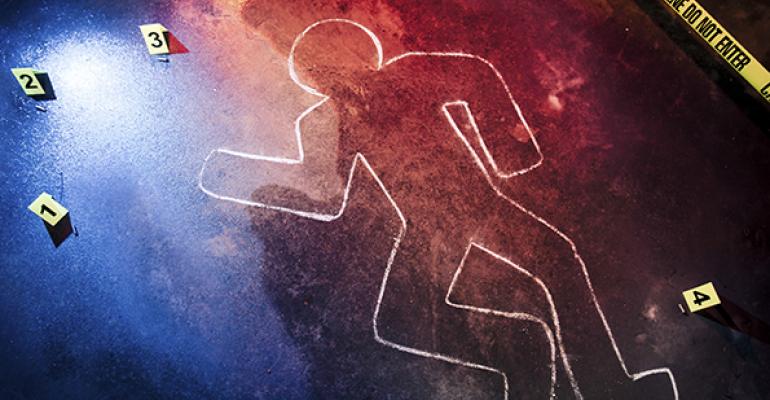 The awkward task of distributing trust funds after a murder-suicide

Derek Morris was severely injured in a car wreck as a teenager and received a large personal injury settlement, which he used to fund the Derek Morris Irrevocable Trust in 1998.  Derek was the trust’s sole income beneficiary.  His parents were co-trustees until his father passed away, at which point, his mother, Martha, became the sole trustee.  The trust provided that at Derek’s death, the remaining assets should be distributed pursuant to any power of appointment executed by him in his will.  Alternatively, if he didn’t have a will, then the remaining corpus would be transferred to his living descendants or to his siblings if he had no living descendants.  The trust also provided that it would be governed by Georgia law.

When he established the trust in 1998, Derek was living in Georgia. At that time, he was single and had no children.  In 2004, he married Sarah Morris and they had a daughter– Iza Lily–later that year.  After Iza Lily was born, they moved from Atlanta to Winston Salem, N.C. and lived there as a family for several years until everything went terribly wrong.  By 2011, the marriage had deteriorated, and Sarah was living with her family in Georgia, traveling back and forth to North Carolina to see Iza Lily.  On Nov. 10, 2011, Derek and Iza Lily were at home in North Carolina, and Sarah was back in Georgia.  That night, Derek went into Iza Lily’s bedroom where she lay sleeping and shot her twice in the head before taking his own life.  In the wake of this tragic murder-suicide, their family members and the courts were left to answer one particularly awkward and complicated question: Where should the trust money go?  Derek didn’t have a will and, at that time, the trust assets exceeded $2.2 million.

Sarah sent a letter to her mother-in-law putting Martha on notice that Sarah expected to be a creditor of Derek’s estate, which was being administered in North Carolina.  Although the trust wasn’t part of Derek’s probate estate, Sarah would seek to hold the trust liable for any judgment against Derek’s estate and, on that basis, advised Martha that she shouldn’t disburse the trust funds to Derek’s siblings.  Sarah then filed a wrongful death action as the administratrix of Iza Lily’s estate and obtained a $10 million default judgment against Derek’s estate.

Meanwhile, Martha, as trustee of the trust, filed a petition in Georgia, seeking a declaratory judgment that the trust agreement required the corpus to be distributed to Derek’s siblings because his only descendant, Iza Lily, predeceased him.

The result in the declaratory judgment action would ultimately turn on whether North Carolina or Georgia probate law should apply, the key difference being that North Carolina’s slayer statute would require the court to deem Derek to have predeceased Iza Lily solely for the purpose of determining whether Iza Lily (or in this case, her estate) would be entitled to the money in the trust, whereas Georgia’s slayer statute wouldn’t .1

The plain language of the trust stated that it was governed by Georgia law.  A Georgia statute governing the meaning and effect of trust provisions provides, in relevant part, that the law of the jurisdiction designated in the trust instrument shall govern the meaning and effect of all terms therein unless the effect of such designation is contrary to the public policy of the jurisdiction having the most significant relationship to the matter at issue.2 None of the parties – not Sarah, Martha nor any of Derek’s siblings – disputed that if Georgia’s probate law applied to the trust, then the siblings would be entitled to the remaining trust assets.  Martha’s position was that Georgia law should apply because the trust agreement selected Georgia law, the trust was created there and executed by Derek who, at the time, was a Georgia resident and the trust had always been located in Georgia and had at all times been administered by Georgia trustees.

The trial court agreed with Sarah that North Carolina’s slayer statute should govern the determination of who predeceased who with respect to a murder committed within its jurisdiction and thus ruled that North Carolina had a greater interest in the case, and its public policy should apply.  Pursuant to the North Carolina slayer statute, the trial court deemed Derek to have predeceased his daughter, leaving Iza Lily as the sole beneficiary of the trust at Derek’s death.

Martha and the siblings argued that the trial court erred in applying North Carolina law when Georgia had the most significant relationship to the trust – because, for example, the trust was drafted and executed there by Derek who, at the time, was a Georgia resident, the trustee was a Georgia resident and the trust assets were located in Georgia.  They argued that the trust’s only connection to North Carolina law was that the grantor (Derek) and one of the contingent remaindermen (Iza Lily) died there but that those facts didn’t outweigh the other factors supporting the application of Georgia law.  Additionally, Martha argued that applying North Carolina law in this case would frustrate predictability and uniformity under the law in the future and create an inefficient process whereby courts would be required to consider each state’s policies in determining which state had the greater interest such that its policies should apply.

Although it seems uncontroversial, if not obvious, that North Carolina has an interest in controlling how property is distributed following a murder within its borders, it doesn’t follow that the logical solution in this case would be for North Carolina law to apply.  Even if we assume for a moment that a fair result in this case would be for Iza Lily’s estate to receive the trust corpus and that applying North Carolina law is the way to get there, it’s easy to see how that same logic could lead to inconsistent and unfair results under different circumstances.

For example, assume there was a father who established a trust just like Derek’s and who had a very similar family background except that this father had two daughters, one living with him in North Carolina and the other living with her mother in Georgia.  If the father killed one daughter in North Carolina, then immediately drove to Georgia and killed the other before shooting himself, would it be fair to apply North Carolina’s slayer statute to allow one daughter’s estate to benefit from the trust and Georgia’s to prevent the other’s from receiving a distribution?  Or alternatively, what if the father took his daughter with him to Georgia to visit her sister and then shot both of them there in Georgia before killing himself.  Would that change the result?  What if he drove both daughters to Disney World and killed them there – would Florida law apply?

Turning the tragic facts of this case into a gruesome law school exam question, it’s easy to see how applying North Carolina law in this case could lead to chaos in the long run.  Because the trust was executed and administered in Georgia and because it wasn’t part of Derek’s probate estate in North Carolina, the Georgia Court of Appeals found that Georgia had the most significant relationship to the trust and that Georgia law governed the meaning and effect of the trust provisions.3 The Court of Appeals therefore reversed the trial court, noting that the judgment in the wrongful death action was sufficient to vindicate North Carolina’s relationship interest in Iza Lily’s murder.  Sarah applied for a writ of certiorari to the Supreme Court of Georgia, which ultimately denied review.4