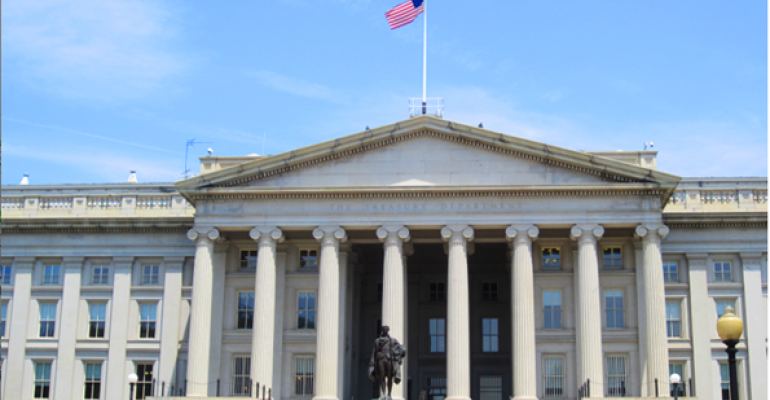 Seven Old Ideas, a New Idea and a Crummey Idea

Last week, the Obama Administration released its budget proposal for the 2015 Fiscal Year, which was accompanied by the Treasury Department’s General Explanation of the Administration’s Fiscal Year 2015 Revenue Proposals, commonly referred to as the “Greenbook.”[1] The two documents are an important pairing as the President’s proposal lays out his overarching objectives, which will require revenue, while the Greenbook puts forward the details of how that additional revenue will be generated. While many proposals that appear in each year’s Greenbook never make it into law, or even the following year’s Greenbook, it’s worth noting the proposals. They represent what the President would sign into law if unbridled by the legislative process and what could end up as potential trade chips in the legislative process.

In terms of the Obama Administration’s general ideas for potential revenue raisers, unsurprisingly, successful individuals remain a prime target. In the 2015 Budget, the President proposes to obtain revenue for various projects and deficit reduction “through tax reform that reduces inefficient and unfair tax breaks and ensures that everyone, from Main Street to Wall Street, is paying their fair share.”[2] This strikes a similar chord to previous proposals, such as 2014’s proposal that “the wealthiest pay their fair share” or 2013’s proposal that “everyone shoulders their fair share…”[3]

Given that the President’s overarching goal of generating additional revenue through additional taxes on wealthy individuals remains unchanged, it shouldn’t come as a surprise that many of the estate and gift tax proposals remain the same. All seven of the transfer tax proposals from last year’s Greenbook reappear almost verbatim in this year’s Greenbook. However, two new proposals have been added: The first new proposal essentially proposes the elimination of trusts that utilize Crummey powers; and the second addresses a practical issue that arises in settling a decedent’s affairs.

The one notable addition to this year’s Greenbook has a disarming title: “Simplify Gift Tax Exclusion for Annual Gifts.” However, besides the heading, the rest of the proposal is very clear—the Obama Administration seeks to eliminate the use of Crummey powers in estate planning.  As the proposal notes, a Crummey power allows a gift to a trust to qualify for the annual exclusion. The donee of such trust has the right for a limited period of time to withdraw the property contributed, which gives the donee a present interest in the property contributed allowing it to qualify for the annual exclusion.

Some planners have implemented Crummey powers by including a large number of beneficiaries, some of which may never exercise their withdrawal power or ultimately receive a distribution from the trust. With each additional donee, more property can be transferred using the annual exclusion. This planning technique can be especially effective and commonly used in irrevocable life insurance trusts that utilize annual exclusion gifts to fund large insurance premiums on the life of the grantor. These insurance trusts often provide taxpayers the best opportunity to leverage their annual exclusion and can be a key part of ensuring that there’s necessary liquidity for an estate.

The IRS has attempted to challenge the broad use of Crummey powers by arguing that each beneficiary must have a reasonable chance or expectation of receiving the property held in the Crummey trust.  The Tax Court has rejected this argument, holding it’s the legal right to withdraw funds that creates the present interest that allows the annual exclusion to apply.[4]  The Greenbook proposal notes the administrative costs to the taxpayers who utilize this planning technique and the costs to the IRS in enforcing the rule.

The Greenbook proposal claims to simplify annual exclusion gifts by simply abolishing the present interest requirement. While this proposal is new for the Obama Administration and comes as the surprise of this year’s transfer tax proposals, it isn’t the first time an administration has sought to eliminate Crummey trust planning. The Clinton Administration, in its last Greenbook, proposed to eliminate the use of Crummey powers.[5] The Clinton proposal eliminated the need for withdrawal rights, but would only allow the annual exclusion to apply if the trust were for the benefit of a single donee and the trust property would be includible in that donee’s estate if the donee didn’t survive the term of the trust. This is analogous to Section 2503(c) trusts.

President Obama’s proposal mirrors the Clinton proposal by eliminating the present interest requirement and allowing the current annual exclusion amount of $14,000 per donee (indexed for inflation) for transfers to individuals or trusts that are only for the benefit of the donee and would be includible in the donee’s estate.[6]  However, there’s an additional taxpayer friendly modification to the Clinton proposal.  In addition to being able to give a certain amount to each individual donee tax-free on an annual basis, the proposal would create a new category of donees.  This new category would include trusts or transfers of other entities that, without a withdrawal right, would generally not qualify as the transfer of a “present interest.”[7]  Under the proposal, each donor would be allowed a $50,000 annual exemption of gifts to trusts or of other property that wouldn’t currently qualify as a transfer of a “present interest.” While this proposal would limit the effectiveness of annual exclusion gifts in some cases, it would simplify reporting and allow the annual exclusion to apply in situations it wouldn’t have otherwise prior to this proposal.

Who’s Executor and for What?

The other new proposal in this year’s Greenbook isn’t a revenue raising proposal, but is intended to provide clarity to a term many may take for granted: “executor.” Section 2203 states:

“The term “executor” wherever it is used in this title in connection with the estate tax imposed by this chapter means the executor or administrator of the decedent, or, if there is no executor or administrator appointed, qualified, and acting within the United States, then any person in actual or constructive possession of any property of the decedent.

Notably, the definition only applies to estate taxes—not gift taxes or income taxes, which are common issues that come up in administering an estate. The proposal notes that this is increasingly becoming an issue, as estates are more frequently addressing reporting obligations related to foreign accounts and the IRS’ Offshore Voluntary Disclosure Program.

In addition, if there’s no executor or administrator acting in the United States, a variety of individuals could be deemed the executor because the term “any person in actual or constructive possession of any property” is broadly defined under the accompanying Regulation and “includes, among others, the decedent's agents and representatives; safe-deposit companies, warehouse companies, and other custodians of property in this country; brokers holding, as collateral, securities belonging to the decedent; and debtors of the decedent in this country.”[8] This could create multiple individuals meeting the definition of “executor” and taking potentially conflicting actions or filing multiple returns.

The proposal seeks to address both of these issues. First, it makes clear that the individual(s) who meets this definition has the authority to act on behalf of the decedent in all tax matters, not just estate taxes. To address the issue of knowing who’s the executor, the Greenbook proposes giving the IRS regulatory authority to set forth rules to resolve conflicts among those who would be deemed executors as a result of having actual or constructive possession of the property.

The rest of this year’s Greenbook largely restates all seven of the proposals that appeared in last year’s, which are:

What To Make of this Year’s Greenbook

The provisions of this year’s Greenbook, both new and the old, aren’t surprising given the President’s desire to raise revenue through transfer taxes on wealthy individuals and decreasing the potential planning techniques that taxpayers can implement. The question is: What will this mean for planners going forward?  As Yogi Berra said, “It is tough to make predictions, especially about the future.”  These Greenbook proposals represent what the President wants to be law. What actually becomes law depends on what happens in Washington during a mid-term election year, which is anyone’s guess.

[1] Office of Management and Budget, Executive Office of the President, Budget of the United States Government, Fiscal Year 2015 (2014); Department of the Treasury, General Explanations of the Administration’s Fiscal Year 2015 Revenue Proposals (March 2014).

[6] The Greenbook proposal achieves this result through reference to IRC Section 2642(c).

and its prodigy, the IRS has successfully argued that gifts of interests in entities that have restrictions that prevent the donee from being able to “any substantial economic or financial benefit that might be represented by the interests” didn’t constitute a gift of present interest.

[9] The text in the Greenbook related to insurance trusts has evolved since the proposal related to coordinating income and transfer tax rules in regard to grantor trusts. In the Greenbook proposal for the 2013 Fiscal Year, irrevocable insurance trusts (ILITs) weren’t excluded from the scope of the proposal as the only excluded trusts were ones that would be includible in the grantor’s estate. In the Greenbook for the 2014 Fiscal Year, “any trust that is grantor solely by reason of section 677(a)(3)” was excluded, which would exclude ILITs from the scope of the proposal. In this year’s Greenbook, the proposal “would not apply to any irrevocable trust whose only assets typically consist of one or more life insurance policies on the life of the grantor and/or the grantor's spouse.” The variation between the Greenbook’s for the 2014 and 2015 Fiscal Years reflects a bit of ambiguity in the Internal Revenue Code, one in which the 2014 Greenbook had inadvertently taken a position contrary to that of the Internal Revenue Service. IRC Section 677(a)(3), read literally, would result in the mere power to use income of a trust to pay insurance premiums on the life of the grantor or grantor's spouse would trigger grantor trust status, which means intentionally defective grantor trusts (IDGTs) that didn’t prohibit the purchase of life insurance policies would in theory be excluded from the proposal. However, court cases on Section 677's predecessor, Revenue Ruling 66-313, and some private letter rulings from the 1980s indicate that there must be an actual payment of insurance premiums as the mere power isn’t enough. However, there are other conflicting PLRs from the 1980s that hold the opposite and reflect a literal reading of the IRC. The fact that the Treasury deviated from their near verbatim recitation of last year’s proposal shows both the ambiguity related to this IRC section as well as the fact that IDGTs are the clear aim of this proposal.