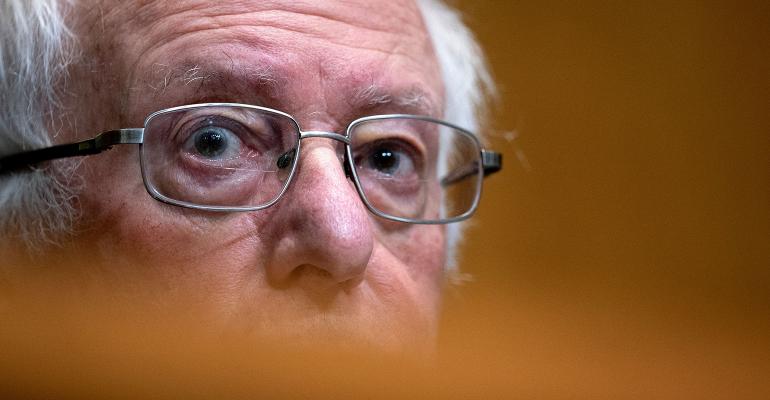 Senate Democrats Are Coming for Stepped-Up Basis at Death

Democrats are once again coming for stepped-up basis.

U.S. Sen. Chris Van Hollen (D-Md.), along with Senators Cory Booker (D-N.J.), Bernie Sanders (I-Vt.), Sheldon Whitehouse (D-R.I.) and Elizabeth Warren (D-Mass.), just announced a new proposal, the Sensible Taxation and Equity Promotion (STEP) Act, to eliminate stepped-up basis at death. The bill would allow individuals to exclude up to $1 million in unrealized capital gains from tax, as well as to pay the tax in installments over a 15-year period for capital gains that apply to any illiquid asset like a farm or business. Changes would be retroactive to January 2021.

Currently, Internal Revenue Code Section 1014 provides that inherited assets have their basis reset to a present fair market value at the moment they’re passed on to an inheritor in a will, meaning heirs don’t pay tax on unrealized capital gains from the inheritance. As Van Hollen’s press release explains, “[T]he income tax is more optional for the wealthiest families, whose income often comes from inherited wealth rather than work. Income from wealth accumulation is supposed to be taxed as capital gains when someone sells an asset for more than what they paid for it. However, when someone dies with assets that increased in value during their lifetime, income taxes are never collected on these capital gains—even if their heirs sell the asset the next day.”

Though the STEP Act is designed to specifically target the ultrawealthy, it will likely spawn estate planning headaches for the middle class as well, who will also have to pay the price for the tax hike.

Comments From the Experts

Here’s what some of Trusts & Estates' esteemed board members have to say about the proposed reform:

The income tax–free step-up in basis is regarded by many as one of the biggest "give aways" under the U.S. tax law. All inherent gains (other than for interests in pension plans and IRAs and similar assets) enjoy this benefit even if no estate tax is paid because it passes to a surviving spouse or is under the estate tax exemption.

The change in the basis (or income tax treatment) of inherited property will be extraordinary for estate planners and their advisors. Such a change, especially if coupled with proposed dramatic changes in the U.S. estate tax system, would rock the world of every estate planner.

What strikes me about the new proposal to tax gain is the cumulative death tax rate that will be paid by families if the estate tax is retained in its current form. I understand that Congress is unhappy with rich people, but the repercussions for family businesses of paying a capital gains tax and an estate tax at each generation would really be quite extraordinary.

One can understand how an objective observer might characterize the current rule allowing a basis step-up at death as a “loophole” in the tax law—particularly given that, with the current $11.7 million basic exclusion amount, the basis step-up is frequently “free,” that is, no estate tax is paid in exchange for the step-up. However, the proposal to tax capital gains at death does present at least a few issues.

First, there’s a valid policy reason for the basis step-up at death. When an individual has owned assets for many decades, locating basis information can be quite difficult. Stepping-up the basis in such assets to their fair market value at the individual’s death avoids altogether what would be a significant challenge in many estates. And presuming a zero basis for assets whose basis information can’t be located would be just as unfair to taxpayers as a free step-up arguably is to the federal fisc.

Third, let’s be honest. A capital gains tax at death is just a different sort of estate tax with another name, and this proposal amounts to a thinly veiled estate tax on the estates of folks of relatively modest means. A $1 million exemption for accrued capital gains at death in today’s economy is laughably small.

Charles A. Redd, partner with Stinson LLP in St. Louis

A credit for taxes paid on only up to $1 million in unrealized gains will result in double taxation of the excess.

The 99.5 Percent Act proposes an increase in the estate tax rates to historically high levels (up to 65%), thereby penalizing those who accumulate wealth. Taxation needs to be fair and shouldn’t penalize any particular class of individuals (wealthy or poor), but seek to reach a balanced approach.

This proposal would require individuals to go back to the days of tracking basis. For those of us who remember 2010, the ability to track basis on assets can often be difficult especially after an individual has died (and for assets accumulated over generations by families, it may be near impossible). This is why paying tax based upon the value of the assets that restarted the basis valuation makes practical sense.

For the vast majority of estates of individuals who died in 2010, trying to evaluate using the then limited adjustment to basis, as opposed to applying the $5 million exemption, was such a nightmare (and for some darn near impossible), all but persons like George Steinbrenner, utilized the exemption/step-up basis regime, as opposed to carryover basis.

It appears that the capital gain tax would be imposed at the time of death, even if assets aren’t liquidated and the gain actually realized. Even with the proposed ability to defer the gain on non-publicly traded assets, this could create a whole other set of problems in terms of the need to liquidate assets in order to come up with the taxes on the capital gain (as well as the estate taxes), as opposed to simply retaining a carry-over basis that would require payment of the tax at the time of liquidation.

It also appears that there would be an imputed transfer every 21 years for assets held in trust under the STEP Act. Many families hold assets in trust for myriad reasons (for example, to protect special needs children, protect the ability of family-run businesses to remain in the family). The 99.5 Percent Act (as I understand it) would in essence impose a 50-year federal rule against perpetuities, which would have the effect of requiring distributions out of trust or an inclusion ratio of 1 at that time, which would appear to make the need for an additional imposition of capital gains taxes every 21 years unnecessary (and could perhaps result in the imposition of multiple tiers of taxation on the same assets).

It seems that these proposals go too far and risk creating a record-keeping (and tax) burden that few will be able to meet.