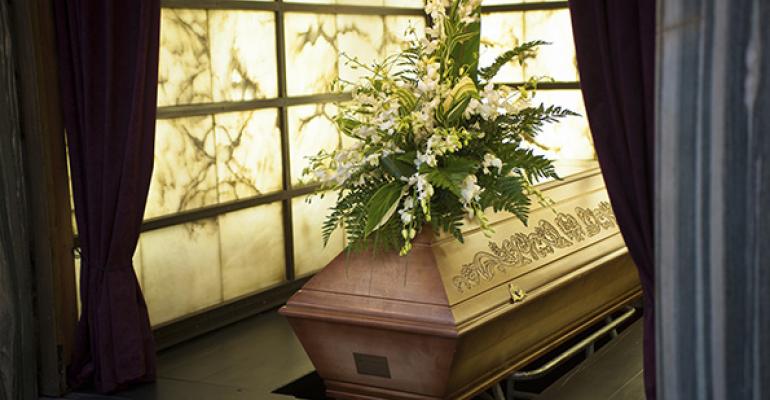 The Rise of Green Funerals

Eco-friendly burial options are legal in every U.S. jurisdiction

If asked to think about what will happen to our bodies when we die, many of us would likely envision the ceremonial aspects of a funeral, wake and burial.  We might instinctively gloss over the other side to the modern burial process, the side that most people choose not to think about because it gives them the creeps: preservation of the corpse.

The simple version of what happens goes like this: The blood is drained from the body, internal organs are removed and all orifices (other than those visible on the face) are blocked off with cotton, after which the body is embalmed – that is, filled with embalming fluid, typically formaldehyde.  The embalming process was first used during the Civil War as a way to preserve soldiers’ corpses to send home to their families.  It gained lasting popularity because the tinted fluid also gives the body a more natural and life-like appearance.  Today, more than half of Americans elect to be embalmed and buried in metal coffins, concrete vaults or other man-made materials that slow down the decomposition of the corpse and, ultimately, remain in the ground long after the body ultimately disintegrates. The next-preferred method, elected by roughly one-third of our population, is cremation.

However, traditional burials and cremation are each facing increased criticism from an environmental perspective.  Roughly 1.5 million tons of concrete and 100,000 tons of steel are reportedly buried in U.S. cemeteries every year.1  And formaldehyde, a known carcinogen, is believed to pose serious health risks for mortuary employees before it’s buried.  At the same time, cremation – once heralded as the environmentally-friendly alternative to piling into already-overcrowded cemeteries – is now increasingly under fire because it releases carbon dioxide, greenhouse gasses and other chemical omissions into the atmosphere.

Along with the rise of other eco-friendly and natural trends like urban farming, home birthing, locally-sourcing produce and producing hormone and antibiotic-free meat, driving hybrid and electric cars, deriving energy from the sun and wind, etc., an increasing number of Americans are seeking out greener options for what to do with their bodies when they die.

As described by the Green Burial Council, a green burial “is a way of caring for the dead with minimal environmental impact that aids in the conservation of natural resources, reduction of carbon emissions, protection of worker health, and the restoration and/or preservation of habitat. Green burial necessitates the use of non-toxic and biodegradable materials, such as caskets, shrouds, and urns.”2

In a green burial, the body typically isn’t embalmed, and if it is, then it’s embalmed using a formaldehyde-free fluid made entirely of essential oils.  It’s then wrapped in a simple cotton or linen shroud or placed in a biodegradable box and, finally, buried by friends and family members only three to four feet below the surface.  When buried this close to the surface and with the roots of plants growing right above it, the body is exposed to the richest layers of soil, and the plants are able to aid in the decomposition process.  In turn, the nutrients produced as a byproduct of that process then nourish the plants.  The landscape of a green cemetery doesn’t look much like the modern cemeteries we’re used to because the graves are often marked by GPS devices or natural landmarks rather than concrete tombstones.  These cemeteries often look more like a park, meadow, or natural forest and, in fact, many of them are protected conservation grounds.

In short, a growing minority of the population are embracing the concept of green burials and feel that they offer a more natural option that harkens back to burial practices pre-dating the Civil War.  These natural burial options are legal in every jurisdiction in the United States.  And they’re cheaper too, often by as much as 75 percent.

But green funerals were just the beginning.  Naturally, they came with a host of accompanying green burial products.  For example, conscientious future-corpses can now purchase biodegradable handmade pine coffins that can be used in the interim as a bookshelf until needed underground.

The next eco-friendly trend on the horizon is human composting.  Through the process of composting bodies to turn them into soil-building material, a non-profit called the Urban Death Project (UDP) seeks to create a new environmentally-conscious option for disposing of corpses in a way that reconnects the deceased with the “cycles of nature.”

The UDP incorporates the science of composting with the group-participation and other ritual aspects of a green burial.  The project contemplates that those closest to the decedent will wrap the body in a simple shroud and then, together, carry it to the top of the compost heap.  There, they would lay the corpse in at the top of the pile, which would be, altogether, around 30 bodies deep.  Months later, after the body had moved through each stage of the composting process, so-inclined friends and family could use the compost in their own gardens or donate it to parks or conservation lands.3

This process isn’t really that different from what’s already happening in many places around the country with animal remains.  As recently noted in the New York Times, some farms compost the bodies of dead livestock or, in some cases, state transportation departments compost road kill.4 From a purely scientific perspective, there’s no reason why human bodies in their natural form (excluding metal surgical implants and the like) can’t be similarly composted.

Of course, as already happens with some composted livestock and animal manure, it’s possible that human compost could ultimately be used to fertilize agricultural crops.  For many, that thought is nothing short of disgusting and taboo.  Despite these concerns, however, the UDP has many enthusiasts.  In just the past two months, over 1,200 people contributed to via Kickstarter, quickly raising over $90,000 ($15,000 more than the campaign’s fundraising goal) to be used toward continuing design and development.

There are legal roadblocks to the composting movement, however, as well.  Many states currently have specific statutory requirements that bodies can only be disposed of by burial, entombment, cremation or donation to medical science.  Absent support for legislative change, the composting movement couldn’t flourish in those environments.  Other states, like Florida, Maine, Minnesota and Oregon, whose laws already allow for more modern dispositions like alkaline hydrolysis (“green cremation”), may provide more fertile ground for the project to grow.