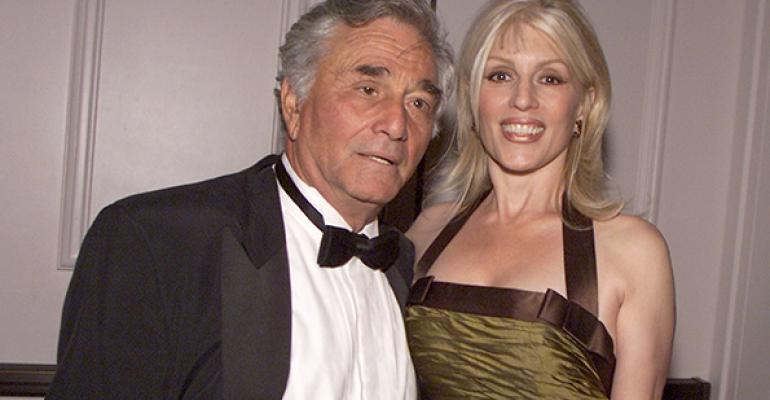 The daughter of Columbo actor Peter Falk is spearheading an effort to encourage California to pass a bill offering adult children greater rights to visitation and information about their aging parents. If it goes into effect, it could provide a useful model for legislation in other states.

As discussed in an interesting recent blog post, Falk’s daughter, Catherine, is motivated by circumstances somewhat similar to those faced by the family of Casey Kasem, which we’ve covered several times in the past.

Though Peter and Catherine’s (adoptive) mother divorced when she was only five, father and daughter still maintained a close relationship. Peter got remarried in 1977 (a year after the divorce) to actress Shera Danese, who he’d met on the set of Columbo. Though the details as to exactly why are sparse, it was openly known that Shera and both of Falk's daughters didn’t get along.

When Peter was diagnosed with dementia in 2008, Catherine found it very difficult to get information about his well being because of her strained relationship with Shera. Catherine eventually challenged Shera’s conservatorship. (In California, when referring to adults, “conservatorship” is used similarly to “guardianship” in other jurisdictions—California's definition of “guardianship” applies only to those overseeing the affairs of minors.) However, the court found that Falk was being well cared for and denied the request. Catherine was allowed to see her father once a month at a neutral location, though the tension still persisted. Falk died peacefully in his home in 2011, but Catherine was incensed when Shera failed to inform her of his passing (Catherine found out through the media) and didn’t let her know the date or location of the funeral (it's unclear if she knows where he's buried today).

Unlike the saga of Casey Kasem, with it’s stolen bodies, hurled meat, allegations of wrongdoing and international intrigue, the conflict here seems to fall largely on the shoulders of the two women who simply couldn’t get along. That being said, this mundanity actually makes it more important to address, as it’s the sort of fact pattern that emerges more often among the general populace and could easily open the door to elder abuse. Regardless of who was in the right here, and independent of the virtues of this particular bill, we all can benefit from legislators paying closer attention to this issue.

The bill, as made available on the Catherine Falk Organization website, would require that:

(d) The court shall grant the petition for visitation unless the court finds, by clear and convincing evidence, that visitation would be harmful to the conservatee.  The court may place any reasonable restrictions on such visitation that it determines to be in the best interests of the conservatee.

Further, the proposed bill would require cemeteries to open their records regarding interments to the public in order to allow persons to locate the graves of loved ones.  Currently, Health and Safety Code § 8110 provides, “The person in charge of any premises on which interments or cremations are made shall keep a record of all remains interred or cremated and of the interment of remains on the premises under his charge, in each case stating the name of each deceased person, place of death, date of interment, and name and address of the funeral director.” The proposed bill would amend this section to include that the records also include, “the location of interment.”