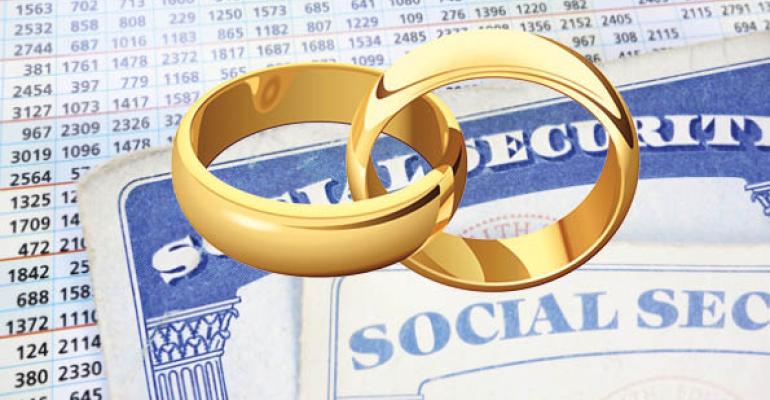 Quantifying the financial advantages of marriage

If you have unmarried (same-sex or opposite-sex) clients who are in long-term committed relationships, you can add enormous value to your services by advising them of the financial advantages and disadvantages of getting married. Much attention has been given to the potential income and estate tax planning benefits of marriage. But, in most cases, particularly for clients in their 60s and older, the more important considerations are Social Security (SS) benefits, individual retirement accounts and retirement plans. I’ll concentrate on the advantages of getting married for SS purposes, but I’ll also offer valuable information for your clients who are already married. In a follow up article, I’ll examine the benefits of being married with respect to IRAs, retirement plans and estate planning.

Assume a single retired wage earner born between 1943 and 1954 has a choice of applying for SS between the ages of 62 and 70. For every month he delays, his monthly benefit increases. To make an “apples to apples” comparison of the advantages of starting at age 62 versus waiting until age 70, let’s assume the individual applying at age 62 receives cost-of-living adjustments (COLAs) and reinvests the SS proceeds. The participant who waits until age 70 loses all the years he could have collected, but when he does collect, he’ll get a much bigger benefit that will continue the rest of his life. Given these and additional assumptions, the age at which the individual who started later has finally received the same amount in total benefits as the individual who started earlier (called the “break even age” or the “break even year”), is 84. (See “Break Even Analysis,” p. 41.) 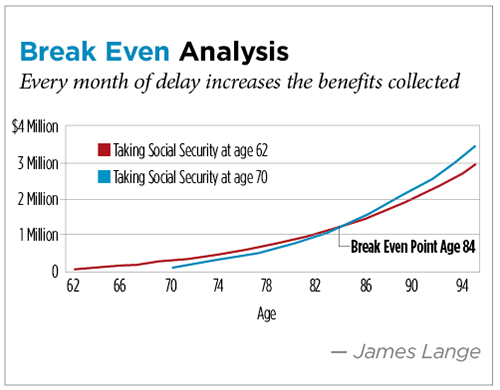 Economist and author Larry Kotlikoff once told me that I should stop thinking about the break even analysis like an actuary, and instead, start thinking like an economist.1 It was a simple but profound paradigm shift. For financial planning purposes, your client shouldn’t fear an early death. If your client dies early, he’s dead. What your client should fear is a long life and running out of money or not having sufficient income. Holding off on collecting SS is a little like buying “longevity insurance,” but at rates far more favorable than any insurance company would offer your client.

Being married opens enormous opportunities for SS recipients, especially those who expect the higher wage earner to predecease the surviving spouse. The financial advantages of marriage can be so great, in fact, that most committed couples in their 60s or older who’ve been in a long-term relationship should at least consider tying the knot.

If you represent a same-sex married couple whose marriage wouldn’t be recognized by the SSA under current law, don’t give up. The SSA’s website says that they’re “working with the Department of Justice to develop and implement policy and processing instructions on this issue.” “This issue” refers to being legally married but living in a jurisdiction that prohibits or doesn’t yet recognize same-sex marriage.

The SSA is encouraging same-sex couples who are legally married to apply for benefits right away. Applicants are being advised that benefits will start as of their filing date, if the SSA follows the IRS’ lead. My position is that even if your client lives in a jurisdiction that doesn’t recognize same-sex marriage, if it’s appropriate to apply for a spousal benefit, you should do so, and hopefully, if the law changes, your client will get the benefits retroactively. This area of the law could change at any time.

Assume you’re working with a couple who could marry and whose marriage the SSA would recognize.

Spousal benefits. Mark and Carol are in a long-term committed relationship and are considering various options for retirement. If they remain single, the Social Security Retirement Benefit (SSRB) each is eligible to receive is completely independent of the SSRB of the other. But if they get married, there are two additional benefits that become available for the purposes of SSRBs. The first is the spousal benefit that one or the other can receive while both are alive. The second is the benefit paid to the survivor after the first death.

A spousal benefit is a benefit paid to one spouse based on the earnings record of the other spouse, provided that they’ve been married for one year and meet additional requirements. The spousal benefit is 50 percent of the other spouse’s primary insurance amount (PIA); that is, the amount that the other spouse would receive if he’d waited until full retirement age (FRA) to start collecting his own benefit. Mark and Carol were both born between 1943 and 1954, so their FRAs are both 66. Assume that, as single individuals, their estimated PIAs are $2,642 and $1,000 respectively. However, if Mark and Carol marry and both wait until age 66 to apply for SSRBs, Carol can collect a monthly spousal benefit of $1,321 (50 percent of Mark’s PIA), rather than the $1,000 she would have received based on her own earnings record. In addition to the increased benefit she would receive while both are alive, Carol would receive a significantly higher benefit if Mark predeceases her. She will collect a survivor benefit equal to Mark’s full benefit of $2,642 each month for the rest of her life. But if they don’t marry, Mark’s $2,642 monthly benefit disappears at his death, and Carol will continue to collect only the $1,000 she’s eligible for based on her own earnings record. Spousal benefits, like SSRBs, generally, can be claimed as early as age 62, but the benefit amount is permanently reduced based on the number of months remaining until FRA.

“Apply and suspend” technique. Jim and Matt are both at their FRAs and live in a jurisdiction that recognizes their same-sex marriage. Jim, the higher earner, doesn’t need the income from SS. For every year beyond his FRA that Jim delays applying for benefits, up to age 70, he’ll receive an 8 percent increase in his monthly check. These bumps are called “delayed retirement credits” (DRCs). COLAs will increase his benefit as well.

Jim and Matt would also benefit by using the “apply and suspend” method, which is most commonly used to provide a free benefit for the lower earning spouse. At age 66, Jim can apply for and voluntarily suspend his benefits, meaning that he’ll receive no money until he unsuspends. Because the SSA follows the law of the jurisdiction where they live, which recognizes their marriage, Matt can file a restricted application that allows him to collect spousal benefits based on Jim’s higher earnings record from age 66 to age 70. During those years, the individual benefit amount for both men continues to grow, just as if neither had applied for benefits. When Matt reaches age 70, he has the option of continuing to receive spousal benefits based on Jim’s earnings record or changing to the benefit to which he’s entitled based on his own earnings record. When Jim reaches age 70, he’ll have earned the maximum amount of DRCs possible and should begin to collect a monthly check himself. Claiming a spousal benefit doesn’t affect the individual benefit for either spouse. So, Matt can effectively receive a free benefit for up to four years, while both spouses’ individual benefits are strengthened by 8 percent (plus COLAs) every year.

SS planning can also provide enormous value when advising a client who has two families for whom they want to provide. This situation may arise out of a second marriage or when a gay client waits until later in life to come out.

Remarry to protect second spouse. When Alice was young, she began a traditional life, married a man and had children. After her husband died, she began a relationship with a female partner, Donna. Alice wants to provide for Donna, who had applied for SS at her FRA and who’s now age 70. Donna’s monthly benefit at age 70 is $800, and it’s her sole source of income. However, Alice also feels compelled to leave her children all of her money, most of which came from their deceased father’s retirement plan. What can she do? If Alice marries Donna (and they sign an effective pre-nuptial agreement), Alice can still leave all of her deceased husband’s and her money to her children and provide an increased monthly income to her current spouse. This scenario is possible because Donna is now eligible to collect a higher spousal benefit based on Alice’s earnings record. Alice’s PIA is $2,200. Fortunately, Alice waited until age 70 to begin to collect her benefit, and with the DRCs she received because she didn’t apply when she was age 66, her benefit grew to $3,152 per month. Assuming that Donna and Alice live in a jurisdiction that recognizes same-sex marriage when she applies, Donna is eligible to receive a spousal benefit based on Alice’s earnings records. The new amount that she’ll receive is 50 percent of Alice’s PIA, or $1,100. This increase means an additional income of $300 every month for Donna while Alice is alive. And if Alice dies first, Donna is eligible to receive a survivor benefit equal to Alice’s full benefit amount. If Alice were to die immediately after the requirements for survivor benefits were satisfied, Donna would have an annual income from SSRBs of $37,824, instead of $9,600. The additional good news is that providing for Donna didn’t cost Alice, or her children, one nickel!

Compare getting married versus staying single. Let’s look at some hard numbers comparing getting married and using “apply and suspend” at 66, versus staying single and starting SS at 62. Consider a hypothetical unmarried couple who has combined assets of $1.15 million and annual living expenses of $75,000. During every year of his career, the higher earner, Rich, earned the maximum amount that counts for SSRBs. His PIA at his FRA of 66 is $2,642, or $31,704 annually. The lower earner, David, earned a more modest amount, and his PIA at his FRA of 66 is approximately $555, or $6,667 annually. If their goal is to retire at age 62 in 2014, before their respective FRAs, what are their options? Here are two scenarios:

1. The couple remains unmarried, and they each apply for benefits based on their own earnings records at age 62. Their benefits will be reduced permanently by 25 percent because they applied before their FRAs. David receives $5,000 and Rich receives $23,778 annually, indexed for inflation, for the rest of their lives.

2. The couple marries and lives in a jurisdiction that recognizes same-sex marriage. Because they have other money available for living expenses, I recommend that they don’t apply for benefits at age 62. Instead, Rich should wait until he’s 66 to apply and then suspend his benefit until age 70. At his FRA, David can then claim the spousal benefit of half of Rich’s FRA benefit, or $15,852. This value is much higher than David’s own benefit, which would have been $6,667 at his FRA. And, because Rich waited until age 70 to collect his benefit, it continues to grow by the 8 percent DRC each year. When he unsuspends his benefit and begins to collect, he’ll receive an additional 32 percent or $10,145 each year. These amounts will also be indexed for inflation.

6. The total includes an allowance for 3 percent inflation of expenses, tax brackets and SS.

8. In the single scenario, Rich receives $23,778 in benefits and David receives $5,000, both starting at age 62. The benefits are adjusted for COLAs of 2.5 percent in subsequent years. 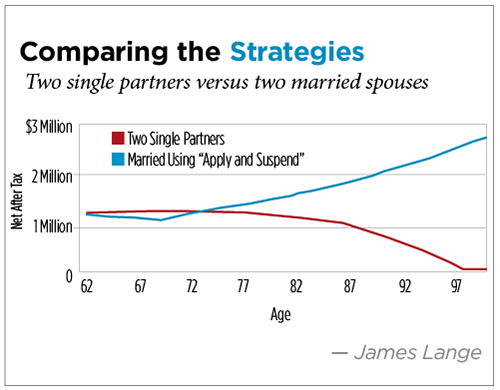 Regardless of their marital status, you shouldn’t encourage any client to apply for SSRBs without first determining which long-term strategy is best. One critical point that clients need to understand is that if they’re married, both spouses generally have the option of applying for benefits based on the earnings record of the other. And, by recommending that they hold off until age 66 or 70, as opposed to applying at age 62, you not only create a higher benefit for the rest of the higher earning spouse’s life, but also you protect the lower earning spouse by increasing the survivor benefit available in the event that he’s the survivor.

—Special thanks to Karen Mathias, Shirl Trefelner and Carol Palmer, of the Lange Financial Group in Pittsburgh, for their help in researching and writing this article.