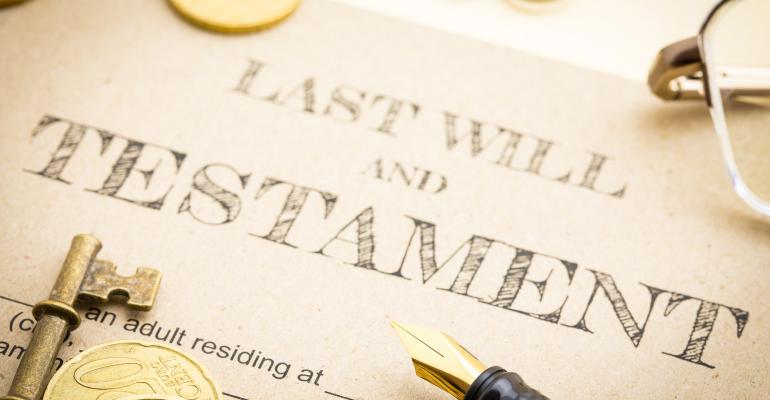 These provisions are NOT an absolute safeguard against will or trust contests.

No-contest clauses, also called in terrorem or forfeiture clauses, can be invaluable tools to deter disgruntled beneficiaries from waging costly and divisive litigation after the death of the testator. However, they must be used carefully and in alignment with state statutes in order to effectively prevent challenges to a testator’s wishes for their estate.

A Carrot and a Stick

In most instances, an in terrorem clause dictates that a beneficiary who contests the validity of a will or trust instrument forfeits any inheritance that they otherwise would have received. A clause could provide, for example:

If any beneficiary named under this Will commences or participates in a proceeding, directly or indirectly, at any time, to have this Will set aside or declared invalid or to contest any part or all of the provisions included in this Will, then that beneficiary, as well as his or her children and descendants, will forfeit any interest devised unto said beneficiary under this Will.

Other versions of in terrorem clauses may allow the executor or trustee to charge the contesting beneficiary’s share with the attorneys’ fees and expenses incurred in defending against the claim. In short, in terrorem clauses allow a testator to wield control over disgruntled beneficiaries through both a carrot (some inheritance) and a stick (complete or partial forfeiture of that inheritance).

Enforceability in Almost All States

In most of the country, testators are permitted to incorporate in terrorem clauses in their estate plans. Indeed, some states like Texas have enforced no-contest clauses as early as 1908. See Perry v. Rogers, 52 Tex. Civ. App. 594, 114 S.W. 897, 899 (1908). For years, Indiana and Florida were the only two states to prohibit their citizens from including enforceable in terrorem clauses in their estate plans. However, with the Indiana General Assembly’s 2018 enactment of Senate Bill 247, Indiana’s amended statutes will provide that a “no contest provision is enforceable” except under enumerated exceptions. Florida is now the one state where in terrorem clauses are unenforceable.

Some states’ statutes provide for exceptions to the enforceability of a no-contest clause. Under the new Indiana statute, for example, if a fact-finder determines that a contest was brought for “good cause,” then the clause will not be enforced. In these circumstances, disinherited heirs in Indiana will still be able to contest estate planning instruments that were procured through fraud or undue influence without fear of retribution. Indiana’s “good cause” exception is loosely modeled after the “probable cause” rule adopted by the Uniform Probate Code, which has been adopted by the majority of jurisdictions. Minnesota has adopted Section 2-517 of the Uniform Probate Code verbatim, providing that “A provision in a will purporting to penalize an interested person for contesting the will or instituting other proceedings relating to the estate is unenforceable if probable cause exists for instituting proceedings.”

Other actions sometimes excluded from the enforcement of a no-contest provision include a beneficiary’s objection to discretionary action taken by the fiduciary, like an objection to a trustee’s excess fees or self-dealing or an action by the attorney general requesting clarification on the terms of a charitable trust. Actions brought to seek the construction or interpretation of an instrument typically don’t trigger a no-contest clause and neither do non-judicial settlement agreements. Beneficiaries in some states may first seek a declaratory judgment determining whether a proposed filing would trigger the no-contest clause.

While most courts have held that no-contest clauses must be “strictly construed,” they’ve diverged on whether this strict construction rule should weigh in favor of forfeiture or not. In some instances, courts, who have contests brought on an infants behalf, have allowed a clause to divest them or even to divest the testator’s entire family.  See, e.g., Keener v. Keener, 682 S.E.2d 545, 548 (Va. 2009) (“we decided to adopt the rule that a no-contest provision in a will should be strictly enforced according to its terms [for] the protection of a testator’s right to dispose of his property as he sees fit”). In other instances of strict construction, courts have considered the “basic question [of] whether certain conduct will be deemed a ‘contest’ of the will within the meaning of the words used by the testator in the will’s no contest clause” and have erred on the side of permitting the inheritance. Jacobs-Zorne v. Superior Court, 46 Cal. App.4th 1064, 1073 (Cal. App. 1996).

As with other estate planning techniques, one size does not fit all, and no-contest clauses are appropriate only under certain circumstances. States have varied widely in their practice of enforcing such clauses.

The practitioner should consult carefully with the client on the family dynamics and their concerns and wishes to ensure that the instrument encapsulates the testator’s intent. Here are the four primary considerations practitioners should discuss with their clients.

1. No stick without a carrot. Because no-contest clauses are intended to be a deterrent, a beneficiary’s potential inheritance must be substantial enough to deter the beneficiary from bringing a contest. As a result, no-contest clauses are only an effective tool to use against beneficiaries named under the instrument and not those whom the testator is completely disinheriting. While a testator may be inclined to omit a beneficiary from their plan, including some amount of inheritance to a disfavored beneficiary may be deemed prudent to avoid the expense and divisiveness of later litigation. Practitioners seeking to protect their clients’ estate plans already may have adopted a practice of having the client execute successive wills and/or trusts to require a contestant to successfully challenge multiple instruments before inheriting. Now clients will be able to execute successive estate plans in which each subsequent plan gradually increases the problematic beneficiary’s inheritance, thereby providing more and more incentive not to bring a contest.

2. Indicate how the testator wishes any forfeited devise to be distributed. Georgia has enacted a statute, which the state’s courts have upheld (Cox v. Fowler), provided that no contest clauses are void unless there is, according to, “direction in the will as to the disposition of property if the condition in terrorem is violated.” It’s a best practice to clarify the testator’s intent as to any forfeited disposition. For example, if the forfeiting beneficiary is the testator’s descendant, then the practitioner should discuss with the client whether the beneficiary’s children and other descendants are to inherit despite the misconduct of the beneficiary or whether the entire branch of the family is to be disinherited instead. If the latter, then the practitioner should ensure that the language in the no-contest provision will not have any existing anti-lapse statutes like dictating that the forfeiting beneficiary be treated as having predeceased the testator. The better practice will be to specify which beneficiaries will inherit instead.

3. Be very specific about what acts or conduct are prohibited. This is particularly critical because courts in some jurisdictions have strictly construed such provisions in a manner to avoid forfeiture, enforcing them only when the beneficiary’s actions “clearly fall within the express terms of the clause.” Prohibited conduct could include challenging the testator’s beneficiary designations or other asset transfer vehicles. Prohibited conduct also could include filing a claim in the testator’s estate or pursuing any action to collect a debt against the testator’s estate. In the California case of Genger v. Delsol, a beneficiary’s challenge of a corporate stock redemption agreement, which the court determined was “the cornerstone” of the decedent’s integrated estate plan, was considered to be within the purview of the no-contest clause. On the other hand, courts may refuse to enforce no-contest clauses that are overly broad. For example, in In re Sand’s Estate, a Pennsylvania court struck down a clause in which the testator revoked all bequests to any beneficiary who “file[d] any exception to [her] account or otherwise [took] action contrary to her interest.”

4. Consider explicitly stating the testator’s intent. Because most courts consider the donor’s intent as paramount in construing an instrument, it’s worth considering the inclusion of a statement detailing the testator’s reasons for inserting a no-contest clause into the instrument. However, the practitioner should ensure that any such statement is factually accurate as any inaccuracies could serve as evidence that the testator lacked the capacity to understand the just desserts of their natural bounty. The practitioner also should ensure that any statement of intent is not defamatory, which could potentially subject the estate to liability for defamation. In some circumstances, including a carefully worded statement would ensure that a court can look to the “four corners of the instrument” to distill the testator’s intent.

When using no-contest clauses, practitioners should be specific about which beneficiaries may be disinherited by the clause, what actions are prohibited and will trigger the clause, and how any forfeited devise will be distributed. States across the country vary widely on their rules in enforcing such clauses. Although these provisions aren’t an absolute safeguard against will or trust contests, coupled with other preventative estate-planning techniques they may provide a testator with greater peace of mind that their wishes will be carried out without challenge.

Sarah Jenkins is an attorney at Faegre Baker Daniels.