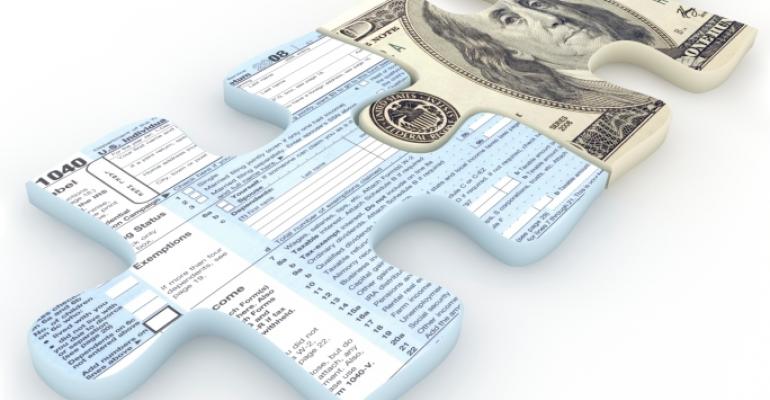 Taxpayers in high tax states with large unrealized capital gains or a regular stream of ordinary income from an investment portfolio have always wanted to find a way to eliminate or minimize their state tax exposure without giving up the economic benefit of the underlying assets.  Over time, such a strategy could produce dramatic results.

Suppose, for example, that taxpayer (T): (1) had a $5 million investment portfolio that produced $300,000 of interest, dividends and capital gains each year, (2) lived in a state with a 10 percent state income tax rate and (3) had a home state that didn’t tax trusts based on the residence of the grantor or beneficiaries.  T could save $30,000 per year (.1 x $300,000) by transferring the portfolio to a trust in a state that does not tax trust income.  Moreover, if T could reinvest the annual tax savings at a 6 percent after-tax rate of return, the savings would grow to $1,103,568 after 20 years.  This amount could be much higher if T funded the trust with low basis assets that would later be sold by the trust, although T might have to be careful about how soon the assets were sold.

To accomplish T’s goals, the trust would need to:

1.   be self-settled to give the grantor the ability to receive distributions;

2.   be a non-grantor trust so that the grantor isn’t taxed on the trust income at home state tax rates; and

3.   give the grantor a special power of appointment to direct disposition of the trust property.

In addition, the transfer of the portfolio to the trust would have to be an incomplete gift, includible in the grantor’s estate at death.

The main obstacle to creating such a trust is giving up enough control to avoid grantor trust status without giving up so much control that a completed gift is made.  Prior to 1997, it wasn’t possible to do this.  Treasury Regulations Section 1.677(a)-1(d) makes a trust a grantor trust if the grantor’s creditors can reach the trust assets under applicable state law.  Unfortunately, the law of all states provided that creditors could look to the assets of a self-settled trust for payment of claims against the grantor.

The rulings all used the same method of making transfers incomplete without creating grantor trust status.  To avoid a completed gift they gave the grantor a special testamentary power of appointment (Treas. Regs. Sections 25.2511-2(b and (c))).  To avoid grantor trust status, they created a distribution committee that had to approve any distribution to the grantor. Because the committee members were adverse parties under IRC Section 672(a), the trust could not be a grantor trust.  Significantly, the PLRs also concluded that the powers held by the distribution committee members were not general powers of appointment.

Bumps in the Road

Two IRS pronouncements made practitioners cautious about creating DING trusts from 2007 to 2013, however.  First, in IR 2007-27 the IRS announced that it was re-examining the conclusion that the distribution committee members didn’t have general powers of appointment (POAs) and requested comments.  No further action was taken on the issue, however.

Then, in early 2012, Chief Counsel Advisory 201208026 was issued, creating a shock wave through the estate-planning community.  The CCA concluded that retaining a testamentary POA makes a transfer in trust incomplete with respect to the remainder interest but not with respect to the lead income interest.  Thus, if this is the official IRS position, a settlor would have to retain an additional power to make the trust a wholly grantor trust.

The most straightforward solution to the CCA 201208026 issue would be to give the settlor a lifetime special POA.  This power would make the gift incomplete with respect to the lead interest as well as the remainder interest.  Of the leading DAPT jurisdictions, however, only Nevada has a statute allowing the settlor to retain a lifetime POA that would satisfy the Regulations without subjecting the trust assets to the claims of creditors.  Since one exception to the grantor trust rules is to retain a lifetime power of appointment for health, education, maintenance and support (HEMS) in a non-fiduciary capacity, Nevada seems to be the best jurisdiction for getting around the CCA 101208026 concern.

A Nevada incomplete gift non-grantor (NING) trust, using a lifetime special POA with a HEMS standard, did indeed pass muster with the IRS in PLR 201310002 (and its sister PLRs, 201310003, 201310004, 201310005 and 201310006).  The IRS ruled that the trusts were non-grantor trusts for income tax purposes and that the transfers were incomplete for gift tax purposes.  Perhaps equally important, the PLR held that the distribution committee members don’t have a general POA.

The PLR should make practitioners much more comfortable about using incomplete gift non-grantor trusts to avoid state income tax, evidently indicating that the IRS has dropped the issue it raised in IR 2007-127.  It also suggests that Nevada is the preferred jurisdiction for setting up such a trust, at least for now.  While there may be other methods of making a transfer incomplete with respect to both the remainder interest and the lead interest without triggering grantor trust status, these methods are untested in the context of irrevocable gift non-grantor trusts.  Other DAPT jurisdictions could change their laws if taxpayers are unsuccessful in obtaining favorable PLRs under their self-settled trust statutes, but even if they do, valuable time will be lost in waiting for the changes.

Finally, note that the increased applicable exclusion amounts going into effect in 2013 might make these trusts popular for taxpayers with more modest wealth.  In the past, taxpayers using these trusts wanted the transfers to be incomplete gifts to avoid payment of gift tax or use of applicable exclusion amount.  Now, taxpayers who don’t expect to have a taxable estate may want gifts to be incomplete so they can obtain a basis step up on the assets at death.