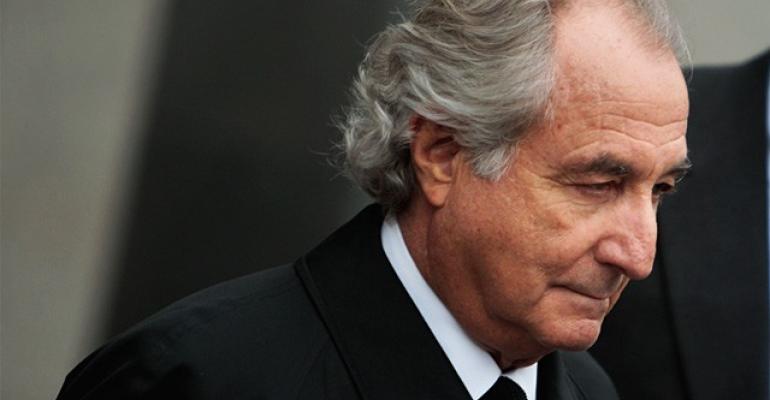 Should an estate pay federal estate tax on an account that didn’t hold the assets it purported to hold?

The ripple effects of Bernie Madoff’s Ponzi scheme continue to be felt.  In Estate of Kessel v. Commissioner, T.C. Memo. 2014-97 (May 21, 2014), the Tax Court refused to grant summary judgment for the Internal Revenue Service and rule that a decedent’s account invested with Madoff was subject to federal estate tax.  The court also denied the IRS’ motion for summary judgment asking that the court determine that a willing buyer or willing seller of a Madoff account wouldn’t reasonably know that the Ponzi scheme existed until the Ponzi scheme collapsed.  Here’s why.

Bernard Kessel died in July 2006, more than two years before the Bernard L. Madoff Ponzi scheme collapsed.  The decedent owned Bernard Kessel, Inc., a New York corporation, which created the Bernard Kessel Inc. Pension Plan (the plan) in 1982.  Kessel was the sole participant in the plan and designated his fiancée and his son as beneficiaries of the death benefits payable under the plan.

In 1992, the plan opened an account with Bernard L. Madoff Investment Securities, LLC.  Following Kessel’s death in July 2006, his will was probated, his fiancée was appointed as executrix and his estate filed a federal estate tax return.  The estate tax return reported the plan’s Madoff account as an estate asset valued at approximately $4.8 million.  The value was based upon an appraisal report that detailed the values of various publicly traded securities, money market funds and options that the Madoff account purportedly held at the date of death.1 Subsequent to Kessel’s death, withdrawals were made from the plan account in excess of $2.8 million.

As is widely known, Bernard L. Madoff was arrested in December 2008 and, thereafter, pleaded guilty in Federal District Court to various charges, including money laundering, making false statements, perjury and theft.  Madoff was sentenced to 150 years in prison.  The plan subsequently attempted to recover the assets purportedly held in its Madoff account. The Madoff bankruptcy trustee denied this claim, maintaining that the plan was a “net winner” rather than a “net loser” because the distributions made from the plan to Kessel during his lifetime and to his beneficiaries subsequent to his death exceeded the aggregate contributions Kessel had made to the plan.

Following the denial of the plan’s recovery claim, the estate filed a supplemental estate tax return valuing the plan’s Madoff account as of the date of death at zero and requesting a $1.9 million refund.  The IRS denied the estate’s refund request.  The estate then filed a timely petition in U.S. Tax Court maintaining, inter alia, that the value of the Madoff account at the date of death was zero, rather than $4.8 million.  In response, the IRS filed a motion for summary judgment on two issues: (1) that the asset to be valued for estate tax purposes was the Madoff account itself rather than the assets within the account, and (2) that a hypothetical willing buyer of the Madoff account wouldn’t reasonably know or foresee that Madoff was operating a Ponzi scheme at the date of Kessel’s death.

The Tax Court denied the summary judgment motion on both issues.  With regard to the first issue, the court ruled that state law defines property interests and federal law determines the taxation of property interests. The court noted that the owner of the Madoff account had what appeared to be property-like rights in the Madoff account agreement, but went on to rule that, based upon the record before it, the court couldn’t determine whether the account agreement was the property interest includible in the decedent’s estate for estate tax purposes separate from any interest the decedent had in what purported to be the assets held in the account.  The court said that this question would be best answered after the parties had an opportunity to develop the relevant facts at trial.  Accordingly, the court denied the IRS motion on this issue.

With regard to the IRS’ second argument, that a hypothetical willing buyer couldn’t reasonably know or foresee that Madoff was operating a Ponzi scheme at the time of the decedent’s death, the court ruled that, as a matter of law, this point wasn’t established.  The court noted that there were individuals who had suspected years before Madoff’s arrest that Madoff’s record of consistently high returns was “simply too good to be true,” citing the U.S. Committee on Financial Services report from 2009 and a report from a hearing held before the U.S. Congressional Committee on Banking, Housing and Urban Affairs.  The court stated that whether a hypothetical willing buyer would have access to information concerning Madoff’s performance and would take such information into account in valuing the Madoff account, or the assets purportedly held therein, were disputed material facts that also had to be determined at trial.  Accordingly, the court denied the IRS summary judgment motion on this point as well.

This case represents a partial victory for the estate and certainly a defeat, at this stage of the proceedings, for the IRS.  It remains to be seen how the taxation of the plan’s Madoff account for estate tax purposes will ultimately be determined.  Similarly affected taxpayers and estates are well advised to monitor the developments of this case as it proceeds in the U.S. Tax Court.

The IRS remains the biggest beneficiary of the Madoff Ponzi scheme, and the Kessel case is an egregious example.  The beneficiaries of the plan account took distributions to pay their shares of the estate taxes and then took additional distributions to pay income taxes on the first distribution, and so on.  The IRS position is that the beneficiaries should pay both estate tax and income tax on non-existent assets.  Then, lurking in the background is the Madoff bankruptcy trustee, who has filed a clawback action claiming the plan was a net winner.  Finally, it’s worth noting that all distributions from the plan to the decedent and his beneficiaries were either to satisfy the minimum distribution requirements of Internal Revenue Code Section 401(a)(9) or to pay taxes.

1. Bernard L. Madoff Investment Securities, LLC provided the estate with a statement detailing the number and price of each publicly traded security, money market fund and option the plan’s Madoff account purportedly held at the date of the decedent’s death.  This statement was then sent to an appraisal service, which prepared an appraisal report valuing these assets in accordance with IRS rules.  This appraisal report was attached to the federal estate tax return.