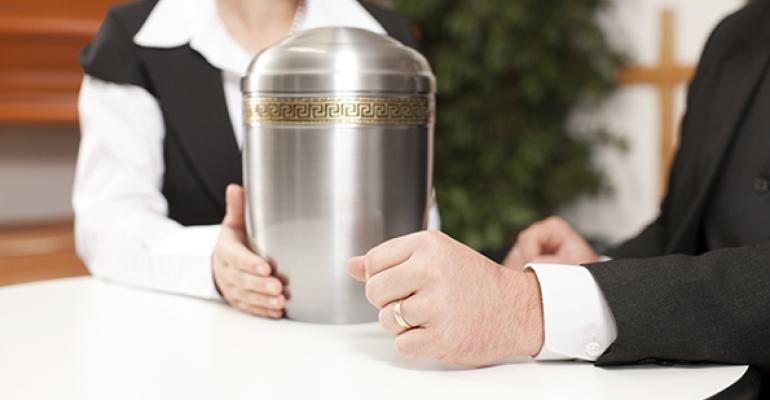 May He Rest In Pieces?

In Wilson v. Wilson, a Florida appellate court recently considered the awkward question of whether a decedent’s ashes are considered property for the purposes of determining who has the right to decide on their final disposition and, specifically, whether they may be partitioned among a decedent’s loved ones who have different opinions about what that final disposition should be.[1]

The facts of the Wilson case involved a divorced couple, at odds over where to bury the ashes of their 23-year-old son, who was killed in a tragic car crash when he was hit by a drunk driver.  When he died, the son was single and had no children.  He left no will or specific instructions for the disposition of his body.  His parents, William and Lili, were the co-personal representatives and sole beneficiaries of his estate.  They agreed on having his body cremated, but couldn’t agree on what to do with the ashes.

William petitioned the Florida probate court to declare the ashes “property” to be partitioned between him and his ex-wife Lili as the beneficiaries of the estate under the probate code.  If the ashes were partitioned, then each of them could dispose of their half as they pleased.  However, for religious reasons, Lili didn’t want the ashes divided and, thus, opposed the petition.

Lili argued that the ashes weren’t property under the law and, therefore, not subject to ownership by anyone, let alone partition among multiple owners.   She argued instead that heirs or legatees could have only a limited possessory right in a loved one’s remains for the purposes of final disposition.  Her position, with which the probate and appellate courts ultimately agreed, is in accord with how decedents’ remains have typically been treated under the law.

Although courts have pretty uniformly recognized that a person has right to dictate what should be done with his own body when he dies, neither probate nor intestate succession statutes typically govern what happens to the body of a decedent.  This is because a person doesn’t have a property interest in his own body while he’s alive.  Thus, a decedent’s corpse has never been an asset of his estate when he dies.  Nor has a corpse passed to a decedent’s next of kin at common law.

However, some forms of quasi-property rights in dead bodies have been developed over time to allow spouses and next of kin to bury their loved one or dispose of the remains in some other lawful manner in accordance with the decedent’s wishes or their own.  The limited property right exists solely to aid them in getting the decedent to his final resting place and ensure proper handling and burial of the body along the way.

As Professor William Prosser aptly explained: “the courts have talked of a somewhat dubious  ‘property right’ to the body, usually in the next of kin, which did not exist while the decedent was living, cannot be conveyed, can be used only for the one purpose of burial, and not only has no pecuniary value but is a source of liability for funeral expenses. It seems reasonably obvious that such ‘property’ is something evolved out of thin air to meet the occasion, and that it is in reality the personal feelings of the survivors which are being protected, under a fiction likely to deceive no one but a lawyer.”[2]

This of course means that the next of kin can’t sell the body or any of its parts.  And it also means that the next of kin has no cause of action in trespass, conversion or trover if someone else steals the body from its grave to make such an unsavory sale.  That isn’t to say that other causes of action are precluded, but the claims can’t be based on the value of the body.  This is probably for the best, as it would be unnecessarily awkward if judges or juries were required to put a dollar figure on the replacement value of Uncle Foley’s molars or Aunt Lardner’s gallbladder.

As recognized by the Wilson court, this framework dates all the way back to the 18th century when Sir William Blackstone commented “the heir has a property in the monuments and escutcheons of his ancestors, yet he has none in their bodies or ashes; nor can he bring any civil action against such as indecently at least, if not impiously, violate and disturb their remains, when dead and buried.”[3]   Blackstone’s commentary was an extension of the English view that the courts would protect the tombstone, the casket and even the clothes and jewelry in which a person was buried, but the Church would guard the actual skull and bones.

But regardless of whether protected by the Church or the courts, deciding how and where one will ultimately lay to rest (and potentially for all eternity, no less) is extremely important for many people.  Religious considerations were traditionally of the gravest import in these decisions.  But as cremation has gained more widespread acceptance and popularity, more and more people are directing their ashes to be spread somewhere that holds an important place in their heart, irrespective of their faith.  As previously mentioned, most courts find it uncontroversial that a person has the right to make this type of direction, but the laws governing how he actually accomplishes it and ensures it’s honored aren’t uniform from one jurisdiction to the next.  While some states have enacted statutes that specifically provide for these types of directions, others haven’t.

Even where these types of statutes have been enacted, they only matter if and when a person actually makes such a direction.  And even if the decedent has done so, the statutes don’t necessarily prevent a court from considering extrinsic conflicting evidence. Nor are they much use in situations in which, similar to the case of a missing will, the decedent leaves his direction in writing, but the writing isn’t found until after his body has already been interred.

In Wilson, for example, there was no evidence that the son ever told anyone – whether in writing or orally – what he wanted done with his body when he died.  Because the court held that his ashes weren’t property, they couldn’t be partitioned and divided between his parents.

While the historical bases for that rule and the court’s holding are well-established, the resulting legal landscape doesn’t really provide much guidance to the courts, nor to people like the Wilsons, as to what that ultimately means.  So the ashes can’t be owned.  They can’t be partitioned.  Then what should be done?  In the order appealed from in Wilson, the probate court had given the parents 30 days to try to reach an agreement about what to do and suggested that if they couldn’t figure it out on their own, then the court might appoint a curator to make the decision for them.  It would be a drastic and unfortunate result for the decision to be made only in hindsight by a disinterested third party, especially after both parents spent so much time, money and energy fighting for their respective positions.  But because there is no Florida law specifically governing the disposition of bodily remains, there’s not much else that the courts could do for them.

Based on the many sticky situations like the one in  Wilson, many commentators are advocating for the adoption of specific state statutes to govern burial disputes and protect families against the heartache of litigating these sensitive issues.[4]  Others have spoken out in support of uniform laws to provide default rules across the board for what to do in these tough situations.[5]  Uniform laws adopted across multiple jurisdictions would certainly provide some additional stability in this area, especially given that people are increasingly moving between states for school, jobs, to be closer to family or for other reasons.

[4] For further discussion of the Wilson case and in-depth look at Florida law and the need for additional statutory protection, see Juan C. Antunez, Probate & Trust Litigation Blog, www.flprobatelitigation.com/2014/05/articles/new-probate-cases/practice-procedure/4th-dca-are-a-deceased-sons-ashes-property-and-thus-subject-to-5050-partition-between-his-divorced-parents/ (May 27, 2014).