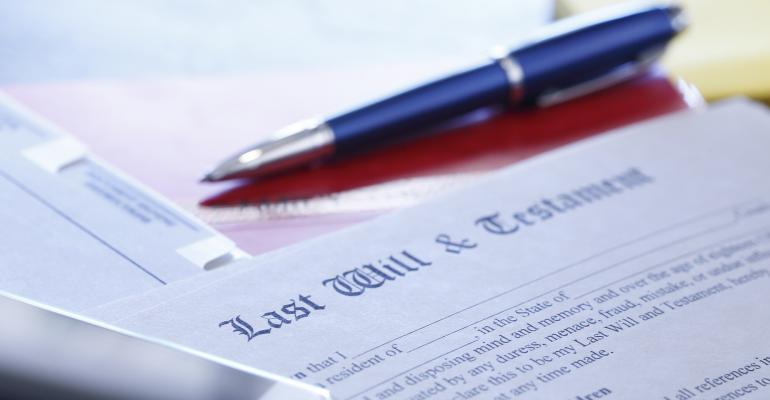 Caution is required when filing litigation seeking relief that’s inconsistent with the instrument.

In a recent decision in Capobianco v. Dischino, Mass. App. Ct. 19-P-197 and 19-P-199 (decision entered July 9, 2020), the Massachusetts Appeals Court recognized the continuing viability of no-contest clauses in Massachusetts wills and trusts in affirming a probate court judgment holding that the beneficiary under a trust forfeited his interest in the trust when he filed litigation seeking, among other things, to replace the trustees with himself.

A key issue that often arises in the context of trust and will disputes and litigation is the existence and enforcement of so called “no-contest” clauses. The formal name for these provisions is in terrorem, which means “in fear” in Latin and is an apt descriptor, given that the enforcement of such a clause has the potential to not only bring a swift end to legal challenges to a trust or will, but also result in stripping the challenging beneficiary of all rights and interest under the trust or will.

Although no-contest clauses are construed narrowly because of the long-standing legal doctrine that equity doesn’t favor forfeiture (for example, the loss of one’s beneficial interest in a trust), they’re enforceable in the vast majority of states. Different tests and considerations exist and must be carefully considered in each jurisdiction. For example, some states will enforce a no-contest clause only if the underlying case is deemed to have been brought without “probable cause.”

Whether a no-contest clause will be enforced is relatively easy to determine when dealing with fact patterns on either end of the in terrorem continuum. For example, a no-contest clause will often be enforced when a beneficiary challenges the validity of an instrument itself, or key substantive provisions, such as clauses dealing with the identity of beneficiaries. Exceptions to enforcement may exist in extraordinary circumstances, like when the instrument was executed by an individual who lacked capacity or was subject to undue influence or fraud. In general, however, wholesale challenges to the instrument must be carefully evaluated when a no-contest clause exists, because it likely will be enforced.

On the other hand, some court actions will probably not trigger the no-contest clause, such as an action seeking an interpretation of the instrument, an accounting when the requesting beneficiary has a right to such information or court supervision or oversight of the trust or estate administration. The rationale of courts refusing to enforce such clauses in these cases is that the party bringing the action isn’t seeking to disturb, alter or challenge the operative provisions of the instrument, but instead is seeking court guidance or intervention to ensure that the trust or estate is being administered as intended and required by the applicable provisions. When the goal or remedy sought in a case is to apply and enforce the provisions of a testamentary instrument, courts aren’t likely to view such matters as triggering a no-contest clause. Although caution is always warranted when no-contest clauses are present, the risk of enforcement is much lower when the litigation isn’t intended to obtain a result that’s inconsistent with the instrument in question.

In the case in Massachusetts, Dennis DiSchino, the beneficiary, was allegedly dissatisfied with the way two trustees of family trust established by his parents were handling their duties. Rather than bringing an action against the trustees for breach of fiduciary duty, however, and seeking to remove the trustees and have them replaced in accordance with the provisions of the trust, Dennis filed a lawsuit seeking to have the probate court ignore multiple provisions of the trust, name him alone as the sole trustee of the trust and the sole manager of two limited liability companies held in the trust, and enjoin the trustees from administering the trust in the meantime.

In its decision, the appeals court affirmed the probate court’s determination that Dennis had triggered the no-contest clause with his lawsuit because had he succeeded “in his request to oust and then personally replace the co-trustees, the succession of trustees would not have been carried out in accordance with the trust’s terms.” The court held that the beneficiary wasn’t merely seeking to address whether the trust was being administered properly but also was attempting to circumvent provisions setting forth the process for how trustees are appointed and who they should be.

One other note of interest in the decision is the appeals court’s holding that the trustees lacked standing to bring a separate declaratory judgment action they had filed to enforce the no-contest clause, because they didn’t have personal interests as trustees in the matter, despite their duties under Massachusetts law to administer the trust as written and to protect the trust property. The court nevertheless affirmed the enforcement of the no-contest clause because the determination was made, and judgment entered, in two separate actions, including the lawsuit Dennis originally filed against the trustees.

The moral of the story is twofold. First, beneficiaries of instruments containing no-contest clauses must be extremely cautious when filing litigation seeking relief that’s inconsistent with any of the provisions of the will or trust at issue. Second, in certain circumstances, trustees of trusts facing problems with beneficiaries may be better served by seeking instruction from the court rather than an affirmative declaration.

Marshall Senterfitt is a director at Goulston & Storrs in Boston, where he advises clients in litigating high-stakes trust and estate disputes. Goulston & Storrs represented the trustees in the Capobianco v. Dischino case mentioned in this article. He can be reached at msenterfitt[email protected].