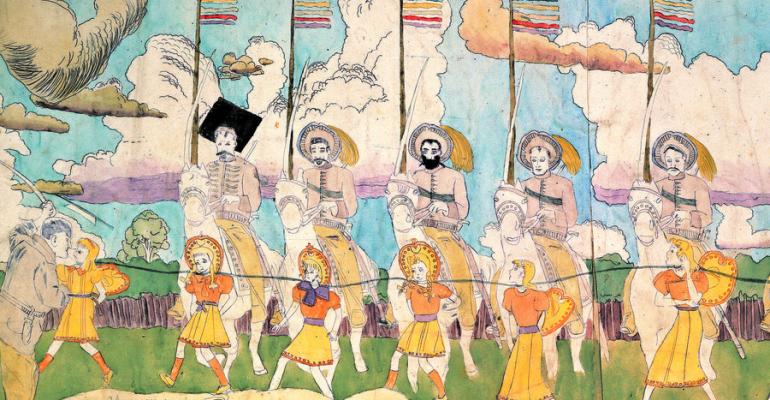 Landlord vs. Descendants: Who Has Right to Artist’s Estate?

There are many ways in which great artists get discovered, but this story is one of the unconventional ones. Henry Darger, a janitor who was a loner, lived out the last years of his life in a nursing home. His landlords, Kiyoko Lerner and her late husband Nathan Lerner, made quite the discovery when they entered the single room he used to rent after his death in 1973. Per the New York Times, the room was “crammed with his colorful illustrations, a 15,000-page book,” including watercolor, pencil, collage and carbon-traced drawings. The contents also included typewritten hand-bound books.

Darger had no known relatives, but instead of discarding the contents, the Lerners showed the works to a collector, who helped turn Darger into a world-recognized artist. According to the New York Times piece, “his work is in the collections of the Museum of Modern Art, the American Folk Art Museum, the Art Institute of Chicago and the Smithsonian.” Some of Darger’s works have fetched close to $800,000 at auction, which is incredible given that he wasn’t at all known during his lifetime.

The conundrum that has arisen in this unusual case are distant relatives who’ve emerged out of the woodwork, thanks to the assistance of a Chicago-based collector who believes that Darger’s estate belongs to his descendants. That sounds like an easy legal conclusion to draw, however, in this case, Darger’s works would have remained unknown if not for the Lerners efforts, who admittingly have profited from it. For what it’s worth, the Lerners say that Darger told them that they can either keep or discard his possessions.

For their part, Darger’s potential long lost relatives have filed a “petition for determination of heirship” in an Illinois probate court last month.

Who Does the Work Belong To?

To help delve into this unique situation, I reached out to Benazeer “Benny” Roshan, Chair of Greenberg Glusker’s Trusts and Probate Litigation Group, in Los Angeles. Here’s what she had to say:

“In Legally Blonde, Elle Woods famously stated, ‘the rules of hair care are simple and finite.’ Truer words have never been spoken. The rules of wealth transfer where a person dies intestate (without a will or trust) are typically also simple and finite. Once in a blue moon, however, we get a super complicated probate that intersects with federal law à la the copyright issues in Darger’s estate.”

She continued, “For starters, all U.S. states have default rules in intestacy cases. For example, in New York the default rule is that if you die intestate, your wealth escheats to the state and a legal heir must petition the court to inherit from the intestate decedent. In direct contrast to that, in Illinois (where Darger resided and died) the default rule favors legal heirs and an intestate decedent’s estate passes to their legal heirs and only escheats to the state when the decedent also dies without any legal heirs. There are no time limits for filing a petition to determine heirship or opening up a probate. A probate can be opened anytime an asset (valued at above the small estates exemption amount) is discovered.”

It appears that in this case, this is exactly what Darger’s fairly distant relatives are doing. “By filing a petition to determine heirship, Darger’s relatives are trying to inherit Darger’s estate assets. The complication in Darger's estate arises from the copyright issues baked into his probate. Darger is not your average intestate decedent who dies with simple assets (real estate, cash, securities, etc.). Darger’s estate primarily consists of valuable art and intellectual property. Darger’s collectible art can be marshaled and appraised, etc. and an argument can be made that he bequeathed them to Mrs. Kiyoko by remarking to her that she can dispose of them following his passing. His intellectual property assets, on the other hand, will be more complicated,” Roshan concluded.