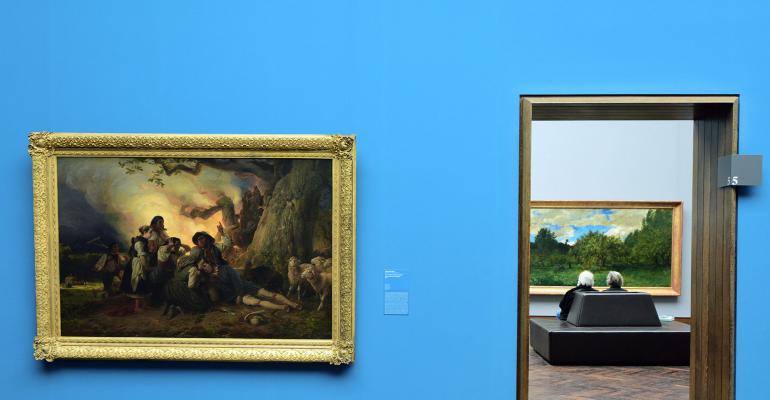 IRS Deems Transfer of Artwork to Museum a Completed Gift

In Private Letter Ruling 201825003 (released June 22, 2018), the Internal Revenue Service addressed whether the transfer of legal title and the remainder interest in the artwork with an agreement to transfer the balance of the retained interest on the death of the donor, constituted a completed gift for federal gift tax purposes. The IRS ruled that the donor’s transfer was a completed gift, based on the donor’s subsequent inability to change the disposition of the artwork.

Donor and her spouse, who owned a collection of artwork, entered into deeds of transfer as Agreements with two museums located in a foreign country.

Under the terms of the Agreements, the couple granted the museums legal title, naked ownership and remainder interests in the artwork, while retaining a life interest and usufruct (the right to enjoy the use and advantages of another’s property short of the destruction or waste of its substance), including physical possession, during the lifetime of the surviving spouse. The Agreements emphasized that the parties intended for the transfer to the museums to qualify as an incomplete lifetime gift for U.S. gift tax purposes. In addition, the Agreements provided, in relevant part, that:

Internal Revenue Code Section 2501 imposes a tax on property transferred by gift. Treasury Regulations Section 25.2511-2(b) distinguishes between complete gifts, which are taxable, and incomplete gifts, which are non-taxable, with the distinction hinging on the donor’s “dominion and control.” Treas. Regs. Section 25.2511-2(b) further provides that when a donor has retained “any power” to change the disposition of a gift, the gift will be considered either wholly or partially incomplete depending on the circumstances.

The IRS ruled that, except for receipt of a favorable ruling, the donor’s transfer of legal title, naked ownership and the remainder interest in the artwork to the museums would constitute a completed gift, despite donor’s retention of a life estate and usufruct.

In reaching its conclusion, the IRS emphasized that under the terms of the Agreements, the donor was precluded from otherwise disposing of the artwork. While the IRS acknowledged the various conditions subsequently included in the Agreements, any of which might thwart the transfer to the museums, it emphasized that none of the conditions were within the donor’s control.

This PLR is interesting for a few reasons. First, from a factual perspective, the recipient museums were foreign charities and therefore both ineligible for an income tax deduction and for the unlimited gift tax charitable deduction. If the donor had chosen a domestic qualified Section 501(c)(3) museum as the recipient of her collection, the question of gift tax would be moot.

Second, from an advisor’s perspective, the PLR addresses the all-too-common conundrum of a client’s personal goals conflicting with optimal tax planning. Here, donor and spouse were emotionally invested in a foreign country and wanted to benefit its public institutions. While such a donation would be inefficient from a tax perspective, donor’s counsel recognized that donor’s non-tax goals need to be taken into consideration as well. While simplistically, the tax tail shouldn’t be permitted to wag the dog, a more sophisticated perspective views tax and personal considerations as perpendicular factors on an XY chart. In such an analysis, donor’s preference for a foreign museum might outweigh the financial loss of an income tax deduction but not gift tax liability. By applying the PLR and including the condition subsequent of a favorable ruling in the Agreements, donor’s counsel allowed her to make an informed decision as to her priorities.