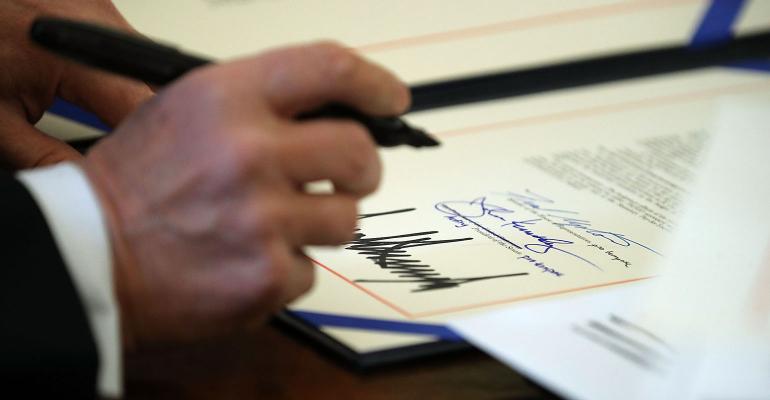 Income Tax and GST Planning Under the New Tax Law

Immediate attention by advisors is needed.

The new tax law commands the need for immediate attention to the estate, generation-skipping transfer (GST) and income tax aspects of new trust drafting, as well as a similar focus on existing irrevocable trusts. Pressing issues include planning for a now potentially unnecessary GST tax, income tax basis planning and renewed attention to the growing difference between the new federal transfer tax exemptions and the similar exemptions afforded under the laws of 15 states and the District of Columbia (D.C.), which currently impose a transfer tax.

Attorneys preparing new trust instruments intended to have a GST tax inclusion ratio of zero, which will now include most bypass or credit shelter trusts and most trusts for children or more remote descendants, must now also consider the ever increasing likelihood that the estate of the primary beneficiary of the trust won’t be subject to federal estate tax. Given the fact that most states no longer impose an estate or inheritance tax, as well as the ever-widening gap between federal and state transfer tax exemptions in those states that do impose either or both taxes, a renewed emphasis on the income tax aspects of estate planning is needed.

Achieving new income tax basis if a beneficiary of a zero inclusion ratio trust should die during the term of the trust involves granting the beneficiary a conditional testamentary general power of appointment (POA) (typically limited to the creditors of the beneficiary’s estate) over the trust assets, to the extent the same won’t result in any federal or state estate or inheritance tax liability to the beneficiary’s estate, assuming no alternate valuation date elections are made, there are no deductible administration expenses, and there are no qualified disclaimers. (Internal Revenue Code Sections 1014(b)(4), (b)(9). Treasury Regulations Section 20.2041-1(b)(3)). An exception to this automatic rule should apply when the beneficiary is survived by a spouse, however, to preserve the full availability of the federal spousal portability election, when desirable. Instead of using an automatic testamentary general POA, during the beneficiary’s lifetime, an independent trustee can be granted the discretionary ability to add the power, to the extent it’s deemed beneficial, as well as the discretionary ability to remove it.

The conditional testamentary general POA should also contain limitations that will eliminate the possibility that: (1) the beneficiary’s estate or the trust will be automatically subject to income tax on any gain attributable to any portion of the remaining trust assets (should such a law ever pass), or (2) there will be a reduction in the federal income tax basis of any asset over its historical federal income tax basis.

Another alternative in zero inclusion ratio situations would be to grant the beneficiary a testamentary limited POA over the trust assets, and then allow the beneficiary to intentionally violate IRC Section 2041(a)(3) (the so-called “Delaware tax trap”), to the extent it won’t cause estate or inheritance taxes to be payable at the beneficiary’s death. Employing the latter alternative will be difficult in statutory or common law rule against perpetuities jurisdictions and may be impossible in jurisdictions that have passed special legislation aimed at preventing inadvertent violations of Section 2041(a)(3).

Trusts With Inclusion Ratio Other Than Zero

The general concept is that, due to the ever increasing likelihood that the estate of one or more beneficiaries of a trust with other than a zero inclusion ratio won’t be subject to federal estate tax, coupled with the fact that there was no lessening of the federal GST tax rate on non-exempt trusts, the trust document should include a testamentary conditional general POA clause that automatically kicks in when there would otherwise be a taxable GST. (Estate tax inclusion the trust assets at the beneficiary’s death may also qualify the beneficiary’s estate for the IRC Section 2013 previously taxed property credit.) It’s important that these automatic clauses not ignore the fact that state estate, inheritance and transfer taxes still exist in 15 states plus D.C., however, oftentimes at much lower exemption levels than the new federal estate and GST tax exemption level.

Take, for example, a beneficiary of a non-GST-exempt trust who resides in Illinois, which effectively imposes a GST tax of only 2 percent on transfers that are also subject to the federal GST tax, but which also imposes an estate tax of between 11.2 percent and 16 percent, beginning with estates in excess of $4 million.(Note that if the grantor of the trust wasn’t an Illinois resident, the trust may not be subject to Illinois GST tax even if the beneficiary resided in Illinois, under the Illinois statute, though constitutionally a state might impose a GST tax if the beneficiary was a resident of the state at the time of the GST transfer.) To the extent the beneficiary’s independent estate is valued at less than $4 million, intentionally including the non-GST-exempt trust assets in the beneficiary’s estate will make sense, because there would be no Illinois or federal estate or GST tax to pay on the same, saving 42 percent in transfer taxes at the beneficiary’s death. On the other hand, if the beneficiary’s independent estate is worth more than $11million (in an $11 million federal estate tax exemption environment), paying the 2 percent Illinois GST tax along with the 40 percent federal GST tax will make sense, because otherwise, the beneficiary’s estate would be paying both federal and Illinois estate tax on the trust assets, at a combined rate (after factoring in the federal estate tax deduction for the state estate tax) of approximately 50 percent.

If the Illinois beneficiary instead has an independent estate that exceeds the $4 million Illinois estate tax threshold but is less than the current $11 million federal estate tax exemption, it may make sense to subject part of the trust assets to a 42 percent combined federal and Illinois GST rate and part (that is, up to a total of $11 million, when added to the beneficiary’s independent estate) at the maximum Illinois estate tax rate of 16 percent, with no federal transfer tax on this portion. The regulations under Section 2041 permit this partial general POA approach. The partial general POA approach would also use the principles discussed in the preceding section of this article, relative to maximizing income tax basis step-up.

Remember that just because the clients’ children all currently reside in a state that doesn’t impose a state transfer tax, doesn’t mean one or more of the children may not eventually move to one of the 15 states plus D.C. that currently does impose one or more transfer taxes on its residents. Can a trust drafting formula be devised that will take into account all of the aforementioned tax variables  -  both federal and state?  For example, the drafting attorney may consider a formula that provides simply that the beneficiary will possess the testamentary general POA described above only to the extent aggregate federal and state estate, inheritance, GST and other transfer taxes applicable to the trust assets are lowered at the beneficiary’s death. beginning with the trust asset or assets having the lowest amount of built-in appreciation (calculated by subtracting the trust's income tax basis from the fair market value on the date of death of such person), as a percentage of the fair market value of such asset or assets on the date of death of such person,(This latter clause protects against the situation should Congress decide to impose carryover income tax basis on assets not included in grandfathered trusts), and after assuming no alternate valuation date elections are made, there are no deductible administration expenses, and there are no qualified disclaimers.

The formula limitation won’t apply if the aggregate transfer tax liability is the same regardless of the beneficiary’s possession of the testamentary general POA. This will have the beneficial effect of pushing the taxable GST down a generation or possibly even eliminating the taxable transfer entirely, and it could bring the previously taxed property credit under IRC Section 2013 into play. However, in this “transfer tax neutral” situation the same conditions discussed above for zero inclusion ratio trusts, relative to avoiding potential built-in gains taxes, etc., should be imposed.

Finally, in the event no tax is imposed on the GST, for example, because the federal and any applicable state GST taxes are repealed, then the above-described rules for zero inclusion ratio trusts should apply to again achieve the maximum income tax basis possible at the beneficiary’s death.

Another potential route for achieving the above-described income tax benefits for an existing irrevocable trust may arise if the existing trust instrument includes a “trust protector” clause. Depending on how the particular clause is crafted, it may include within its scope permissible amendments to the trust to achieve income tax advantages for the trust and its beneficiaries.

Some states may also have “trust modification” statutes that permit revisions to irrevocable trust documents under specified circumstances, with or without court approval, including revisions to achieve tax advantages.

If the existing irrevocable trust happens to include a testamentary limited POA in the beneficiary, a final tool the beneficiary may have at his disposal is to follow the plan already outlined above of intentionally violating Section 2041(a)(3), at least to the extent of the most appreciated assets of the trust, but without increasing estate or inheritance taxes payable at the beneficiary’s death.  For this planning technique to succeed, however, it must first be determined that the strategy isn’t already foreclosed by the provisions of the applicable trust document or by applicable state law.

Finally, any change to an existing irrevocable trust arrangement must account for the fact that exemption amounts can change in the future (for the good or for the bad) and/or there could be changes to the income tax laws at death, e.g., carryover income tax basis or income tax on built-in gains.  There are also the above-described state estate and inheritance tax issues to consider. In other words, depending on the particular facts and circumstances, simply terminating a trust and distributing assets outright to the beneficiary may not always be the wisest decision, but instead a better course may be to retain the assets in trust, but add the particular type of formula disposition language described in this article.