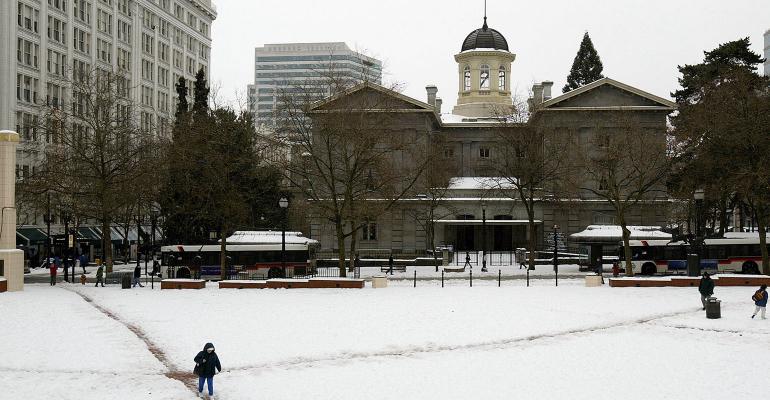 In Estate of Evans v. Dept. of Rev. (368 OR 430, July 29, 2021), the estate of Helene Evans appealed from the Oregon Tax Court’s determination that a qualified terminable interest property (QTIP) trust established by her late husband in Montana was taxable in her estate.

Helene had moved to Oregon one month before her husband Gillam passed away in 2012.  Gillam’s will provided for a testamentary trust for Helene and other beneficiaries. The trust was governed by Montana law and administered by his son, a Montana resident. Originally, the will provided that the trust was for the benefit of multiple beneficiaries. However, the executor petitioned a Montana court to modify the trust to allow for a QTIP election. The court approved, and the trust was reformed so that Helene was entitled to the trust income during her life and principal could be distributed to her in the trustee’s discretion for her health, education, maintenance or support in her accustomed manner of living.  She didn’t have a power of appointment (POA).

The court confirmed that the question of whether a state has necessary connections depends on the nature of the resident’s interest in the intangible property. The court distinguished the recent case of North Carolina Dept. of Revenue v. Kimberley Rice Kaestner 1992 Family Trusts, 139 S. Ct. 2213 (2019), in which the U.S. Supreme Court held that North Carolina couldn’t, under the due process clause, tax trust income over a 4-year period when: (1) the trust was administered under New York law by a New York trustee; and (2) all beneficiaries lived in North Carolina but no distributions were actually made to any beneficiaries. Other cases the court reviewed involved trusts in which the beneficiaries had some form of POA – which was determined to be sufficient control to allow the beneficiary’s state of residence to tax the trust.