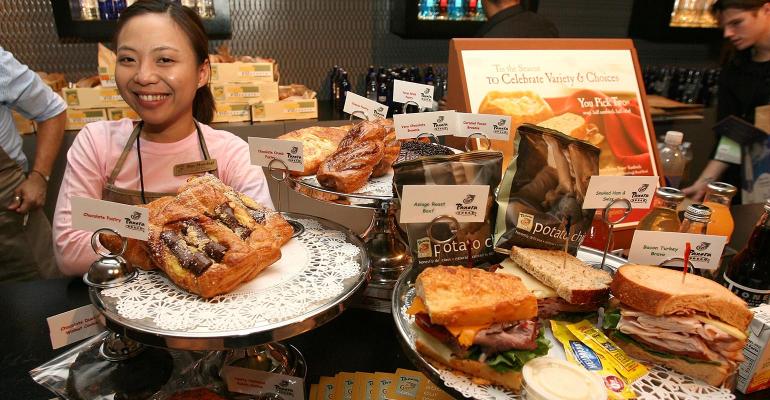 And why it’s important for your clients to 'pick two.'

Panera Bread, the national fast casual food chain, has an interesting and flexible menu choice called “You Pick Two.” This option allows customers to combine any two items from a variety of soups, sandwiches and salads for their meal selection.

Did you know the Internal Revenue Service offers a similar “pick two” option for your estate-planning clients? While the IRS menu seems pretty limited (big surprise), it’s more appealing than you might think.

I know what you’re thinking: “Randy, what the heck are you talking about?” Simply put, when helping a family plan their estate, you can select their beneficiaries from any of three columns:

What I find both fascinating and puzzling is that most affluent families (and often their advisors) aren’t aware they have options. If you step up to the counter and don’t know what you want, the IRS tells you what you’re having. It collects taxes from you instead of having that money go to the charitable organizations that are most important to the family. No soup for you!

By the way, this situation has existed for many years, and there’s no evidence that it’s changing significantly. The most common reason for this is that uninformed high-net-worth (HNW) families are often working with uninformed advisors. The longer the situation drags on, the more the taxman prevails, and the less chance your clients have of taking advantage of the IRS’ more appealing options.

Recently, I was working with an advisor and one of his HNW clients. Both husband and wife were active on local charitable boards. They had even added a provision in their current planning that directed a small amount of their estate to go to charities. But their overall planning still left many millions of dollars vulnerable to estate taxes. The solution, according to their former advisor, was simply to buy insurance “to pay the taxes.” Ouch!

This shortsightedness is more common that you can imagine. After I spent some time with the couple, I realized how important philanthropy was to them. As we dug deeper, I let them know there was a way to use advanced trusts to eliminate their taxes entirely and to direct that savings to fulfill their philanthropic goals. The results were eye-opening for the couple, for the charities they support and for their three children as well. Win, win, win.

Speaking of the next generation, many wealth holders are terrified of what will happen to their children (and grandchildren) if they transfer significant wealth to them before they’re ready for the responsibility that comes with it. In the back of their minds, they’re wondering: Will the windfall derail their motivation to work hard and lead productive lives? Will they squander it? Will it diminish their sense of purpose and service?

Too often, I see HNW families and their advisors lacking a system for intragenerational communication, mentorship, transfer of leadership and decision-making. No one becomes a champion golfer without lessons. Why do we think our kids can handle millions of dollars without instruction and guidance? These conversations are extremely important but often never take place. Why do you think so many inheritances fail?

Affluent families frequently tell me how worried they are about “ruining” their heirs with too much money too soon. But they’ve never taken steps to prepare their kids to receive the windfall that will inevitably come their way. In most cases, the “planning” consists of leaving their heirs the maximum $25 million that’s allowed by law before it gets taxed. In fact, most plans call for making distributions to children when they hit certain ages (25, 30, 35 being the most common) without any proof that they’re mature enough to handle the money responsibly.

Another frequent lament I hear is: “I made my wealth on my own. I don’t want to disadvantage my children by giving them what I didn’t have.” When I hear that concern raised, I think to myself: “What will you do with all that money? Spend it? That’s impossible. Give it to charity? If so, why don’t I see that in your planning documents? Lose it all? That’s unrealistic.”

Why not spend some time helping your clients communicate with their children about the importance of upholding the family’s values and for showing gratitude for the significant financial assets they will be inheriting.

Parents are so woefully ill-equipped to take this role that they bluster on about not leaving their ungrateful kids a dime. Instead, they should be saying: “I’m out of my depth here. I don’t have anyone to turn to for help. I don’t want my family to get crushed by this future wealth transfer.”

Randy A. Fox, CFP, AEP, is the founder of Two Hawks Consulting LLC. He is a nationally known wealth strategist, philanthropic estate planner, educator and speaker.