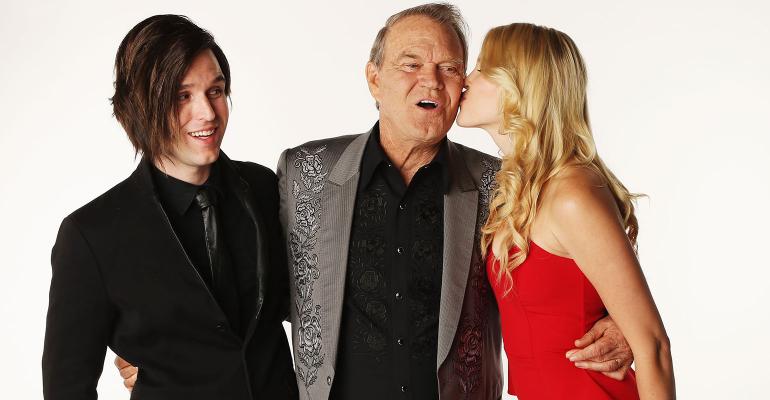 Court rules that Glen Campbell’, children have standing to contest his wills.

Legendary country singer Glen Campbell passed away in 2017, intentionally leaving three of his children from his second marriage out of his wills. Last week, a judge in Tennessee ruled that the three children can dispute the validity of the wills that excluded them from inheriting. They petitioned the court to certify that a contest to the will exists, on grounds of his alleged lack of capacity and undue influence. Back in April 2018, Taste of Country reported that the legend’s estate is only worth an estimated $410,000 (according to documents filed with a Nashville probate court) instead of a previously speculated $50 million! This estimate notably doesn’t include future income from royalties.

The two wills contested are from 2001 and 2006. The latter names fourth wife Kimberly Campbell, who’s also the executor of the estate, and five of Campbell’s other children as his beneficiaries. Campbell revealed that he was diagnosed with Alzheimer’s back in 2011; however, it’s unknown how far back he was suffering from the disease. The burden will be on the children to prove that Campbell lacked the requisite capacity to execute both wills. “If a will is deemed invalid, due to lack of capacity or because it was the product of undue influence, the immediately preceding will is generally resurrected,” says Sandra D. Glazier, an equity shareholder at Lipson Neilson P.C., practicing in its Bloomfield Hills, Mich. office, who isn’t affiliated with the case. The previous will likely disinherited them as well, which is why they would have to prove the invalidity of both wills.

According to the Tennessean, Kimberly recently stated that she wouldn’t challenge Campbell’s children’s right to contest the wills; the judge’s decision notes that there was no opposition. She has also filed a claim seeking reimbursement from the estate to the tune of over half a million dollars to cover the cost of Campbell’s medical care.

Other Matters Before the Court

The news outlet also reports that one of his daughters, Debbie Campbell-Cloyd, has filed for a complete accounting of payments the estate has made, as well as payments to and from a previously undisclosed bank account. She alleges that royalties should have been deposited into an account controlled by Campbell’s estate but instead have been deposited into the undisclosed account now controlled by Kimberly Campbell, an account over which Campbell’s former publicist and manager, Stanley B. Schneider, has power of attorney.