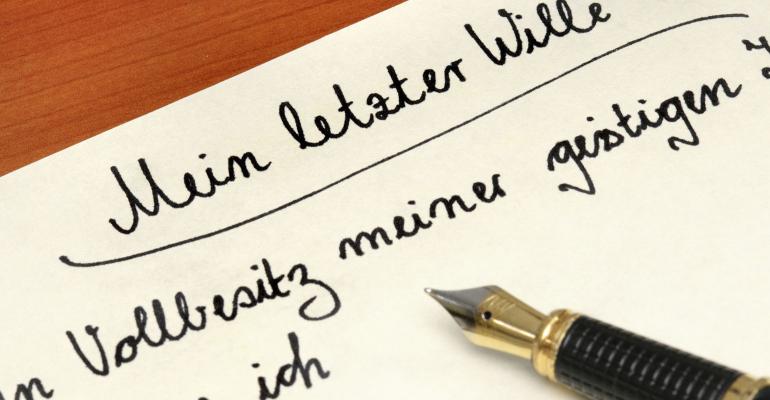 Foreign Will Barred From Probate as a Nuncupative Will

Advisors should take a second look to prevent disputes over distributions.

One of the effects of globalization is the increase in foreign-born individuals and families visiting, living and investing in the United States. There are now over 40 million foreign-born individuals residing in the U.S., or 12.9 percent of the U.S. population.1 During 2015, foreign buyers of real estate accounted for 12 percent of the total number of residential units sold in Florida alone.2 As these people look to pass on their U.S. assets after death, they may do so by a will or trust executed in the U.S. or in their home country. Recently, Florida’s Third District Court of Appeal was asked to consider whether the disposition of real and personal property owned by a citizen of Argentina was governed by the will she executed in the U.S. or by the notarial will executed in Argentina.3 The court acknowledged that notarial wills may be admitted to probate in Florida, but held that the Argentine will was barred as a nuncupative will.

Elena Isleno, a citizen of Argentina, died in Florida at 79 years old. At the time of her death, she owned property in the U.S. and Argentina. Shortly before her death, Elena executed two wills. She executed the first will in New York, directing the disposition of her real and personal property located in the U.S. to friends and family living in the U.S. and Argentina. Elena signed the will in the presence of attesting witnesses who also signed in the presence of each other and Elena, in accordance with the typical formalities required of American wills.4

Four months later, Elena executed a second will in Argentina. This will directed the disposition of all of her assets to friends and family living in Argentina. For this will, Elena orated her testamentary wishes to a notary who typed up her will, then read the will back to her. Elena approved the will in the presence of the notary and two witnesses, and the notary signed and stamped the will. But neither Elena nor the witnesses signed the will.5

Admitting a Foreign Will to Probate

Florida’s Third District faced the issue of whether the unsigned, notarial Argentine will could be admitted to probate in Florida. Florida law allows a foreign will to be admitted to probate if the will is valid under the laws of the country where executed.6 This is the case even if the will doesn’t strictly comply with Florida’s will formalities.7

Another type of will, more common in civil law jurisdictions, is a notarial will. A notarial will involves a testator declaring their last wishes to a notary who transcribes what is said then retains the will permanently, sometimes in a central registry.9 Because a foreign country’s laws may require that the will remain in the custody of the notary, the Florida Probate Code allows a copy of a nonresident’s notarial will to be admitted to probate in Florida if the original will could have been admitted in Florida as well.10

Estate planners will find themselves dealing with more international clients as the United States continues to become a more global community. The dispute over the distribution of Elena’s estate should cue advisors to double-check that clients’ wills and trusts executed in the U.S. or abroad will have their intended effect. As the court in Elena’s case noted, “Florida is already a global community … We owe it to them to ensure that their testamentary intentions are strictly honored.”