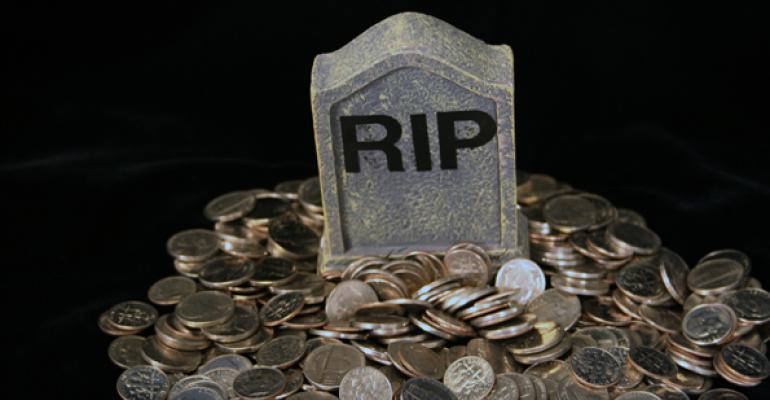 This month, we’re discussing an interesting case out of New Jersey.  In Estate of Kellogg, 2012 WL 1912261 (N.J. Super 2012), time (of death) is of the essence.  John Kellogg, who lived to the ripe old age of 97, died following a car accident in 2008.  John and his wife, Barbara, were passengers in a car driven by Russell Marks.  The Marks’ car collided with a car driven by Trevor Hulfish.  John spent a week at the University Medical Center in Princeton and was then discharged to a rehabilitation center.  Although he appeared stable at the time of discharge, his condition rapidly deteriorated, and he passed away 13 days after the accident from “blunt force injury.” His estate paid approximately $1.2 million in estate taxes.  Based upon actuarial tables, his co-executors argued the estate taxes would have been less than half that amount had he lived until 2009.  Moreover, the estate wouldn’t have owed any tax had he made it to 2010.  (Apparently, if you make it to 97, you’re predicted to reach the century club - the life expectancy of a 97-year-old man is 3.2 years.)

Daughters Prudence and Judith, the decedent’s heirs and wrongful death beneficiaries, argued that the additional tax paid in 2008 was part of their pecuniary injuries.  The wrongful death defendants countered that the claim for additional estate tax paid was too speculative to be included as damages.

In a matter of first impression for New Jersey, the court explained that the purpose of the wrongful death statute was to compensate survivors for their monetary losses.  Monetary losses include lost future earnings and additional damages.  The court then looked to other jurisdictions for guidance.  The only two precedents they found were from Illinois and New York.  Neither court allowed the consideration of estate tax payments or lost tax credits as permissible components of damages calculations.

The New Jersey court disregarded those opinions as contrary to the views of their legislature.  The court didn’t see the anticipated “battle of the experts” to be a problem.  To the contrary, the court decided to remand and allow evidence from each side to determine the extent of damages.  The court’s concerns about the scope of expert testimony were somewhat assuaged by the decedent’s age when he died, because his life expectancy would be only a few more years at most.  The court held that the defendants should be allowed to rebut the heirs’ position by arguing that John might have well lived beyond 2012.  Thus, the defendants could attempt to show that, assuming Congress doesn’t change the federal estate tax, and it reverts to a $1 million exemption, the estate would have paid more taxes than it did in 2008.  The calculation, either way, is straight forward, not a circular calculation to account for additional estate tax paid to get the correct net amount, since wrongful death proceeds aren’t subject to estate tax.

This is a novel theory of damages in a wrongful death case that has some logical appeal.  The recent roller coaster our transfer tax system has been on – from no estate tax in 2010 to a $5 million+ exemption in 2011 and 2012, to possibly back to $1 million  in 2013 – would seem to make these damages pretty speculative, but, perhaps, not any more so than more traditional elements of damage.