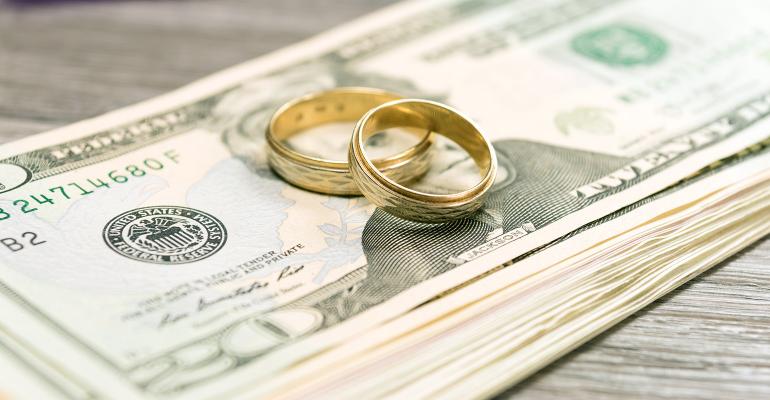 Estate Planning for Married Couples With IRAs and 401(k)s

Should proceeds be paid to a bypass trust for the benefit of the surviving spouse?

The rise in the stock market over the past several years, teamed with the passage of the Setting Every Community Up for Retirement Enhancement (SECURE) Act two years ago and the scheduled 50% reduction in the size of the federal estate tax exemption four years from now, has resulted in a renewed interest in estate planning for individual retirement account (IRA) and Internal Revenue Code Section 401k accounts (401k accounts) owned by married couples.  Married couples owning significant IRA and/or 401k accounts, as well as other assets, need to decide whether to consider paying all or a portion of the IRA and/or 401k proceeds to a bypass trust for the benefit of the surviving spouse to remove the designated portion of the IRA or 401k proceeds from the surviving spouse’s taxable estate, as well as to achieve certain other non-tax objectives.

Limitations of the Spousal Portability Election

In 2013, Congress permanently passed into law what’s known as the portability election for assets passing outright to a surviving spouse at the first spouse to die's death.  Portability allows a surviving spouse to use the unused federal estate tax exemption of the deceased spouse, thus claiming two federal estate tax exemptions.  Given the beneficial aspects of this now 9-year-old law, why is there any longer a need for a married couple to consider using a bypass trust in their estate planning?  There are at least five reasons:

In states that impose a separate estate or other transfer tax, there may be a sixth reason if state law doesn’t afford a portability election similar to federal law.

Traditional Bypass Trust as an Alternative

In light of the above-described limitations of the spousal portability election when compared to bypass trust planning, whereby married couples divide their assets in some fashion so that, at the death of the first spouse to die, all or a portion of their separate assets pass to an estate tax-exempt trust for the survivor, the latter type of planning is still in play after 2013.  The question is:  are bypass trusts an appropriate receptacle for IRA and 401k plan proceeds given that, after the SECURE Act, these trusts are generally subject to a 10-year maximum payout rule, whereas the outright payment of IRA and 401k plan proceeds to a surviving spouse is entitled to spousal rollover treatment and, therefore, potentially greater income tax deferral?  Bypass trusts are also thought to: (1) be subject to the highest federal income tax rate at levels of gross income of as low as only $13,550, (2) include an exemption of only $100, and (3) not qualify for income tax basis step-up at the surviving spouse's death.

It’s a simple matter to dispatch with the last issues mentioned.  Judicious use of IRC Section 678 in the drafting of the bypass trust will generally eliminate the relevance of high trust income tax rates, as well as the minimal exemption, because the trust isn’t even taxed to the extent the surviving spouse is taxed instead under Section 678.  What’s more, using Section 678 will cause the estate tax-exempt bypass trust to be unreduced by the annual income taxes that are payable by the surviving spouse, thereby further enhancing the importance of the bypass trust in estate planning for married couples.  (For more information on the use of Section 678 to avoid the high income tax rates on complex trusts (including electing small business trusts), see Jim Blase, 6-7-8:  Estate Planning with Section 678 of the Internal Revenue Code (2022)). Although a full discussion of the topic is beyond the scope of this article, a conditional general testamentary power of appointment (POA) may be included in the non-IRA portion of the bypass trust, which inclusion can often result in full or partial income tax basis step-up for all or a portion of the appreciated assets in the trust at the surviving spouse’s death.  If income tax basis step-up is also desired for the IRA portion of the trust, full or partial income tax basis step-up at the surviving spouse’s passing may be achieved by intentionally triggering the so-called “Delaware Tax Trap.”

Use of Disclaimer Beneficiary Designation

Assuming the IRA or 401k plan administrator makes it available, use of a beneficiary designation that will allow for a full or partial disclaimer by a surviving spouse, in favor of a bypass trust, would be an excellent estate planning tool here, due to the flexibility the technique affords, and should therefore definitely be explored.  Here’s one sample primary beneficiary designation for the husband’s IRA and/or 401k accounts, when a full or partial disclaimer may be anticipated:

"JANE DOE, provided, however, that to the extent JANE DOE shall disclaim any portion of the benefits, (i) the disclaimed portion shall be distributed to JANE DOE, or her successors in trust, trustee of the trust established under the DOE FAMILY TRUST     AGREEMENT dated __________, 2022, as amended, to be further divided and/or distributed if and as said trustee directs, and (ii) for the purposes of interpreting the provisions of the aforesaid trust agreement, JANE DOE shall not be treated as having predeceased JOHN DOE.

The assets to be held in the trust estate with the income and principal administered and distributed pursuant to the provisions of this ARTICLE shall be held by the trustee as a separate trust estate, and the assets in said trust estate shall at all times during the term of the trust be divided into two separate trusts.  Trust “One” shall consist solely of assets passing to the trust estate held under this ARTICLE as a result of disclaimer by the surviving spouse, or by the surviving spouse's legal representative, after the death of the deceased spouse, and Trust “Two” shall consist of all other assets.  The assets of both Trust One and Trust Two shall be held in trust with the income and principal administered and distributed as follows:

Although again a complete discussion of the topic is beyond the scope of this article, a conditional general testamentary POA may also be added to Trust Two in an effort to achieve income tax basis step-up for all or a portion of the Trust Two appreciated assets at the surviving spouse’s death.  The intentionally triggering the Delaware Tax Trap technique won’t be available for disclaimed IRA/401k proceeds in Trust One, however, because the IRC Section 2518 qualified disclaimer rules don’t permit any POA in the surviving spouse, testamentary or otherwise, in disclaimed assets.