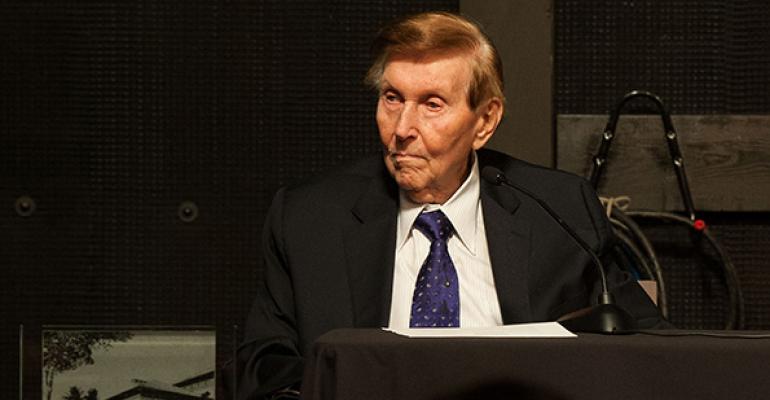 Estate Not Liable for Gift Tax

In 1972, Edward S. Redstone and his family settled a dispute regarding Edward’s ownership of shares in National Amusements, Inc. (NAI), which was a family-owned corporation.  Pursuant to the terms of the settlement agreement, Edward released his claim to 33 1/3 shares of NAI, and on his father’s insistence, he put those shares in trust for his children.  In exchange for the release, Edward’s father and brother acknowledged Edward’s ownership of the remaining 66 2/3 shares.  Edward redeemed those shares for $5 million.

Edward died in 2011, and the Internal Revenue Service determined a gift tax deficiency of $737,625 against Edward’s estate.  The IRS also determined a tax of $368,813 under Internal Revenue Code Section 6653(b) for fraud and alternatively, for $36,881 for negligence (IRC Section 6653(a)) and $184,406 for failure to timely file a gift tax return (IRC Section 6651(a)(1).  The IRS and the estate disputed whether Edward’s transfer of stock in trust for his children was a gift or was made for adequate consideration in money or money’s worth.

In Redstone v. Commissioner, 145 T.C. No. 11 (Oct. 26, 2015), the Tax Court held that Edward’s 1972 transfer of stock was made in the ordinary course of business for full and adequate consideration.  As such, the transfer wasn’t a gift for federal gift tax purposes, and Edward’s estate wasn’t liable for gift taxes on the transfer.  Here are the details leading up to the estate’s victory.

Mickey bought various drive-in movie theaters and real estate between 1936 and 1954.  He incorporated Northeast Theater Corporation (Northeast) in 1954 and it served as the management company for the family business.  Mickey then created three corporations: one to handle the theater component, one to handle the real estate component and one to manage the refreshments.  Sumner and Edward owned percentages of each corporation; Mickey’s percentage in each one was the largest.

The business grew, and to consolidate the corporate structure, on Aug. 28, 1959, Mickey incorporated NAI as a closely held holding company based in Norwood, Mass.  Edward and Sumner were NAI’s directors; Mickey was its president; Edward was its secretary-treasurer; and Sumner was its vice president. All three of them contributed their stock in the movie theater corporation to NAI.  The value of their contributions based on their shares was as follows:  Mickey, $30,328; Edward, $17,845; and Sumner, $18,445.  Mickey also contributed $3,000 cash.  In return, they each received 100 shares of class A voting common stock.

In the late 1960s, Edward’s son Michael suffered from psychiatric problems and was admitted to a psychiatric ward at a hospital.  Questioning Edward’s decision making and concerned about tarnishing the Redstone name, Mickey, Belle and Sumner were upset with Michael’s hospital admission and insisted that he return home.  Edward eventually acquiesced and began feeling marginalized within the Redstone family and business.  Disagreeing with many decisions that Mickey and Sumner made at NAI, Edward contemplated leaving NAI. In 1971, Edward quit.

Edward requested possession of the 100 shares of common stock registered in his name and hired legal counsel to help him obtain possession.  Edward argued that he had a legal and unrestricted right to sell the shares registered in his name and threatened to sell the shares to a third party if NAI didn’t redeem them at an appropriate price.  Mickey refused to turn over the stock certificates, arguing that NAI had a right of first refusal to repurchase the shares.  Mickey also argued that part of Edward’s stock, though registered in his name, was actually held in an “oral trust” for the benefit of Edward’s children.  This position was based on the fact that Mickey initially contributed 48 percent of NAI’s capital but only acquired a third of its stock.  Mickey argued that he gratuitously accorded Edward more stock than he was entitled to and that additional shares were really held in an oral trust for Edward’s children.

For six months, the parties unsuccessfully attempted to resolve the matter, and in December 1971, Edward filed a two lawsuits in Massachusetts Superior Court against Mickey, Sumner, and the Redstone family companies: Redstone v. Nat’l Amusements, Inc., (the NAI lawsuit) and Redstone v. Northeast Theatre Com. (the Northeast lawsuit).  The NAI lawsuit claimed that Edward owned 100 shares of voting common stock, which were “unencumbered and unrestricted as to their transferability,” and asked that the shares be delivered immediately to Edward.  Mickey argued that he had possession of all the stock registered in Edward’s name, a portion of which were held in trust for the benefit of Edward’s children.

The litigation was adversarial, distressing and public.  Edward’s lawyer believed that Edward had to separate completely from NAI, and Mickey wouldn’t be satisfied until Edward acknowledged the supposed “oral trust” and placed some of the shares of stock in trust for his children (Ruth Ann and Michael).

The parties agreed to settle the matter and executed an agreement on June 30, 1972.  Although 100 shares of NAI voting common stock were registered in Edward’s name, both sides agreed that Edward owned only 66 2/3 shares of stock that were “free and clear of all trusts, restrictions and encumbrance.”  The remaining 33 1/3 shares of NAI stock registered in Edward’s name were held by Edward, for the benefit of his children “in trust and not as beneficial owner.”

As part of the settlement agreement, NAI purchased the 66 2/3 shares of stock from Edward that he was deemed to own.  Edward’s two thirds interest in the stock was valued at $5 million.  Edward executed an assignment transferring to NAI, in exchange for $5 million, 66 2/3 shares of NAI voting common stock.  He also created irrevocable trusts for Ruth Ann and Michael’s benefit, resulting in the Ruth Ann Redstone Trust (Ruth Ann Trust) and the Michael David Redstone Trust (Michael Trust).  Sumner became sole trustee of each trust.  Edward executed two assignments, each transferring 16 2/3 shares of NAI stock to Sumner as trustee of the trusts.  The parties executed mutual releases, and Edward resigned from the family businesses and resigned as trustee of all Redstone family trusts.

In 2006, Michael and trustees of certain Redstone family trusts sued Sumner, Edward, and NAI, claiming that additional stock should have been transferred to certain trusts in 1972 based on a prior “oral trust.”  Edward testified at trial that although he always believed he was entitled to all 100 shares of NAI stock originally registered in his name, it was in the best interests of everyone to reach the 1972 settlement.  In his testimony, he stated that he paid no gift tax in 1972 on the transfer of stock to the Michael Trust and Ruth Ann Trust because he “made no gift.”  He also testified that he was forced to give up ownership in 33 1/3 shares to get payment for his remaining 66 2/3 shares.

Edward further testified that Mickey and Sumner used the idea of an oral trust to justify their position; in Edward’s view, he never held any NAI shares under an oral trust for his children, even though the settlement agreement indicated that 33 1/3 of his shares were held in an oral trust.  He testified that he had to acknowledge the oral trust to placate his father and settle the litigation.  Ultimately, the Massachusetts Superior Court, in O’Connor v. Redstone, 896 N.E.2d 595 (Mass. 2008), ruled that the plaintiffs failed to prove that an oral trust was created.

In 2013, the Internal Revenue Service issued a notice of deficiency to Edward’s estate for $737,625 in federal gift tax for the calendar quarter ending June 30, 1972.  Edward didn’t file a federal gift tax return for that quarter because he believed that the NAI shares that he transferred to the Michael Trust and Ruth Ann Trust didn’t constitute a taxable gift.  The IRS also issued a notice for $368,813 for fraud under IRC Section 6653(b) and alternatively, for $36,881 for negligence under Section 6653(a) and $184,406 under IRC Section 6651(a)(1).  Edward’s estate petitioned the Tax Court and the instant matter ensued.

Transfers in the Context of Settlements

IRC Section 2501 imposes a tax on gifts, but a transfer of property in exchange for adequate and full consideration doesn’t constitute a gift (Commissioner v. Wemyss, 324 U.S. 303 (1945)). Treasury Regulations Section 25.2511-1(g)(1) confirms that the gift tax isn’t applicable to a transfer for a full and adequate consideration in money or money’s worth or to ordinary business transactions.

The Tax Court noted that although it closely scrutinizes transfer of property within family members, such a transfer may be treated as one “in the ordinary course of business” if it meets certain criteria.  According to Treas. Regs. Section 25.2512-8, the transfer must be bona fide; be transacted at arm’s length; and be free of donative intent to constitute “ordinary course of business.”  These three criteria apply to settlements of family disputes as well.

Bona fide: The Tax Court first considered whether the parties to the settlement agreement were settling a genuine dispute, in contrast to a collusive attempt to make the transaction appear to be something that it wasn’t.  In the instant case, there was nothing to suggest that the 1971-1972 dispute within the family was a sham to disguise a gratuitous transfer to Edward’s children. Rather, said the Tax Court:

"All the evidence points in the opposite direction.  Edward was not working in concert with Mickey or Sumner in any sense of the word. To the contrary, Edward was genuinely estranged from his father and his brother during 1971-1972, and this estrangement grew worse as time went on."

Free of donative intent: For a gift to be treated as made “in the ordinary course of business” under Treas. Regs. Section 25.2512-8, the absence of donative intent is essential.  Although Edward had affection for both of his children, his objective during the dispute period was to obtain for himself ownership of or full payment for the 100 NAI shares originally registered in his name.  In fact, stated the Tax Court, if Edward was

motivated by donative intent toward Michael and Ruth Ann, he would have agreed with Mickey’s “oral trust” argument and not filed two lawsuits. Edward was forced to accept the transfer to satisfy Mickey, settle the family dispute and obtain a $5 million payment for the remaining 66 2/3 shares.  “There is no evidence that Edward, in making this transfer, was motivated by love and affection or other feelings that normally prompt the making of a gift,” said the court. Accordingly, there was no donative intent.

The IRS further argued that Ruth Ann and Michael didn’t provide any consideration to Edward for the transfers of the shares and on that basis, the transfer constituted a gift.  The Tax Court rejected this argument, holding that Treas. Regs. Section  25.2512-8 explicitly states that  “transfer of property made in the ordinary course of business * * * will be considered as made for an adequate and full consideration in money or money’s worth.”  It doesn’t matter, said the court, that Edward didn’t provide consideration; what matters is that Edward received consideration.  In this case, Edward received recognition by his father and brother that Edward was the owner of 66 2/3 shares of NAI, and he received $5 million in exchange for those shares.