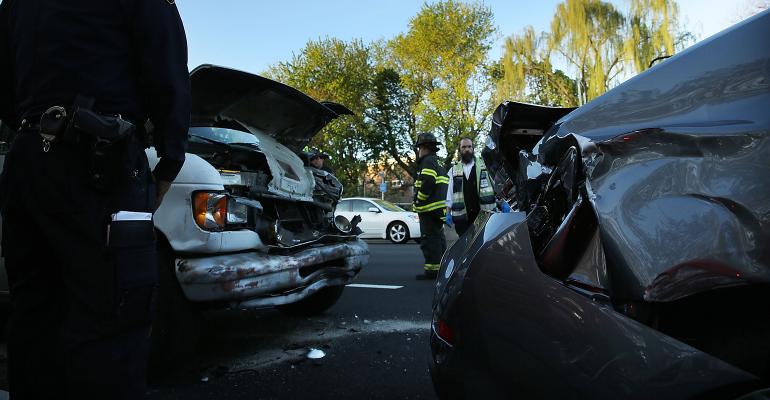 Estate Not Liable for Car Accident After Decedent’s Death

Christian Schnitzspahn and his wife lived with his adult daughter in her house.  Christian’s daughter had her own car, but she occasionally drove her fathers’ car with his permission.  His will, however, didn’t gift the car to her.  Rather, it named his daughter and stepson as equal co-beneficiaries under the residuary clause.  A month after Christian died, but before the appointment of a personal representative of his estate, his daughter was driving his car and came across an accident.  Samuel Depriest and his grandmother had collided with an oncoming vehicle, and the other driver was killed.  Christian’s daughter collided with Samuel’s disabled car, allegedly causing injuries to Samuel and his grandmother beyond the damage they already suffered from the fatal accident that occurred just a short while before.

Samuel and his grandmother sued the estate as vicariously liable for damages caused by the daughter’s use of the car.  They relied on the “dangerous instrumentality” doctrine.  They alleged that the personal representative had implied control over the car and impliedly consented to the daughter’s use by failing to take affirmative action to prevent her from using it.

A probate case for the estate was filed four days after the accident, naming Christian’s stepson as the personal representative.  Unlike the trial court, the appellate court held that the car was an asset of the estate and subject to administration.  As the appellate court explained, the car belonged to the estate and didn’t belong to the daughter or stepson, and the daughter didn’t have Christian’s consent to use it after his death.  By contrast, the stepson, as soon as he because the personal representative, would have the right to control the assets of the estate, including the car, and his acts taken before his appointment would have the same effect as acts taken after appointment.

The appellate court held, however, that “authority” does not equate with “duty” or “obligation.”  The statute doesn’t impose on the nominated personal representative any statutory duty to act prior to his appointment.  Thus, there can be no implied consent on the part of the personal representative, which, it turns out, was an element to Samuel’s allegation of dangerous instrumentality.

The dangerous instrumentality doctrine, under Florida law, makes the owner of a vehicle (in this case, allegedly the nominated personal representative of the estate) vicariously liable when he entrusts the vehicle to another by express or implied consent.  Here, there was no claim of express consent, and the appellate court concluded that Samuel and his grandmother were unable to demonstrate implied consent when it was undisputed that: (1) the personal representative didn’t know that Christian’s daughter ever used her father’s car, and (2) the personal representative lived in South Carolina and couldn’t be expected to know that Christian’s daughter used the car.

Instead, Samuel and his grandmother relied on the personal representative’s failure to act when he knew that he had the authority to act – a fact that they established by pointing to his delivery of the car title to his lawyer prior to his appointment as personal representative.  By failing to take control of the car at that time, he supposedly consented, if only impliedly, to the daughter’s use of the car.