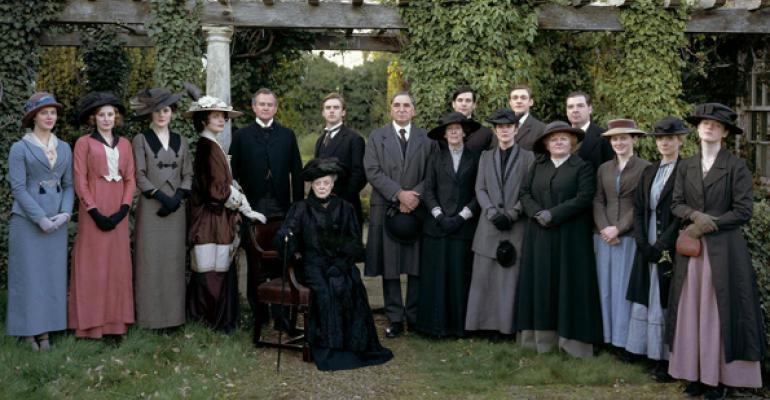 Even in a make believe world, succession isn’t easy

The critically-acclaimed PBS hit, Downton Abbey, the British series about the aristocratic Crawley family and their servants, provides a snapshot of the challenges and opportunities that business families face.  Robert, the current Earl of Grantham, has bankrupted the estate—the family business—and his young heir, Matthew Crawley, is determined to modernize the ancestral home and return it to solvency, without putting too many people’s noses out of joint.

“Oh my dear,” snickers the curmudgeonly Dowager Countess of Grantham, “I don't think there is a way to achieve that.  I mean, you must do what must be done, of course, but I can safely say a great many noses will be out of joint.”

And so they were.  The Earl himself is tormented by Matthew’s ideas and changes and vigorously resists them.  But the family patriarch is forced to bend to Matthew’s will because he’s provided the sinking estate with an infusion of capital—thereby becoming co-owner of Downton Abbey, as well as the Earl’s heir and son-in-law.

In real life, far from the TV world of post-Edwardian England, business families can find themselves in the same circumstances as those of the beleaguered Crawley family.  Consider estate planning.  In the TV series, the Earl doesn’t leave the estate to his eldest daughter but, having no son, passes it on to Matthew, an unknown relative.  He’s forced to do so because English laws at the time required a male heir.

Although primogeniture is no longer in effect in most countries today, it’s not uncommon for families to choose to operate under similar restrictions.  For example, some business families only allow male family members to be owners.  This arrangement is usually established with the intention of reducing future conflict in the family.  Unfortunately, it can have the unintended consequence of excluding some of the talented leaders in the next generation who are female.

Understandably, family business owners often wish to keep the business, and sometimes management, in the family, and so they try to restrict future ownership to bloodline relatives.  To endure and remain competitive, however, each generation requires at least one talented and driven leader.  There’s no guarantee that blood relatives will have the necessary vitality and energy.  Sometimes, the passion and ideas can come from the outside, for example, from in-laws. That’s what happened in the Canadian company Bombardier Inc. and its recreational BRP division, which has subsequently been spun off.  When the founder died in his 50s, it was the founder’s son-in-law who transformed the business from a pioneering, small snowmobile company into a global airplane, locomotive and recreational company, with combined revenues of some $20 billion.

Downton Abbey reminds owners of assets, and the advisors who counsel them, that caution should be exercised in placing too many restrictions on who can be owners in the future.  There may be good reasons for the restrictions, but full understanding of what could happen is crucial.  Trust and estate advisors can serve their clients well by doing scenario planning with them about how such rules/restrictions could ultimately play out in ways that hadn’t originally been intended.

There are other truths that advisors can glean from the fictional Downton Abbey. In the series, Robert dismisses virtually all of his heir’s attempts to bring the estate into the 20th century.  Although this opposition is exaggerated, we do see reluctance on the part of some owners to give up their positions of authority.  This holding back is natural and must be understood, particularly today when change is happening at an unprecedented pace.  Technological knowhow and globalization are dramatically altering the rules of competition.  Both challenges call for skills that the younger generation may be uniquely capable of providing.

Trusts and estates advisors can try to be aware of these family dynamics when they have clients who may be fighting change and holding on too long. This isn’t to say that the generation in power must move over entirely.  But the senior generation should be encouraged to bring in the next generation and listen to them, and perhaps begin to empower them to make changes sooner.

Of course, advisors would do well to remember that some of the senior generation’s objections to change can be traced to the next generation’s sometimes over-eagerness to implement fresh ideas.  Matthew was on right side of history in terms of developing a new business model for Downton Abbey, but he has a genius for putting peoples noses out of joint.  He insinuates that the longtime overseer of the estate had bungled the finances, leading the trusted family advisor to resign on the spot.  Matthew also doesn’t understand the Earl’s deep commitment to the estate’s employees—the servants who have served the Crawley family for decades.

There’s a lesson here for trust and estate attorneys when advising the rising generation of family business owners about how to more deferentially assume greater control.  Even in the midst of ushering in necessary changes, younger clients should be encouraged to show respect for the achievements of the older generation.  Fortunately, Matthew is genuinely fond of the Earl, his co-owner, benefactor and father-in-law, and this affection translates into what’s best for the family and for the business. Ultimately, their shared commitment helps them to get past Matthew’s slights.  But Matthew could have been far more effective by balancing his zeal for change with a clearer demonstration of his appreciation for what has made the Abbey successful for centuries.

Even in the make-believe world of Downton Abbey, succession isn’t easy.  In the last episode, Matthew has a sudden car accident and dies before taking over the running of the estate.  Fortunately, his wife has just given birth to a male heir. Whether that son will grow up to be a good steward of the family business—or not—is the stuff of TV potboilers.  Here in the real world, we encourage owners to plan meticulously for succession and to avoid such cliffhangers whenever they can.