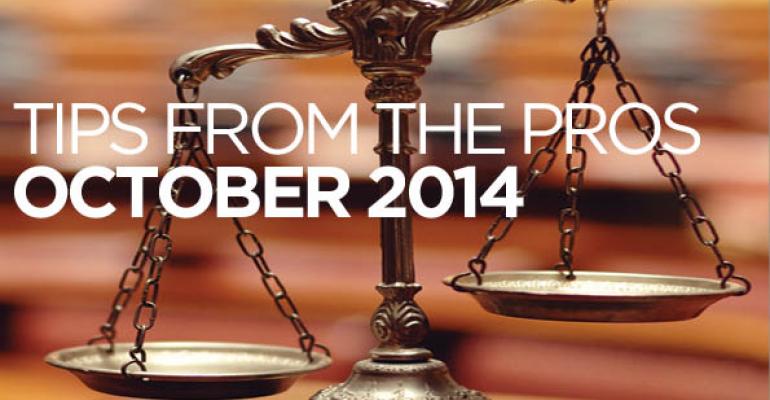 Don’t Forget To “Unbundle” for Winter!

. . . a cost is subject to the 2-percent floor to the extent that it is included in the definition of miscellaneous itemized deductions under section 67(b), is incurred by an estate or non-grantor trust, and commonly or customarily would be incurred by a hypothetical individual holding the same property.

Of particular note, Treas. Regs. Section 1.67-4(b)(4) states that fees for investment advice (including any related services that would be provided to any individual investor as part of an investment advisory fee) are commonly or customarily incurred by a hypothetical individual investor and are, therefore, subject to the 2 percent floor. However,

Some fiduciaries, including a large majority of corporate fiduciaries, have historically been compensated for their services through “bundled fees.” A bundled fee is a single fee for fiduciary administration that’s typically calculated and assessed, without being separately allocated among the several distinct services rendered, based on percentages of income earned during the period covered by the fee and the fair market value of assets under management as of the date with respect to which the fee is being charged. Fiduciaries have been able to deduct bundled fees without regard to the 2 percent floor.

Treas. Regs. Section 1.67-4(c)(1) generally requires a bundled fee to be specifically allocated or “unbundled,” for purposes of determining the AGI of a trust or an estate, between costs subject to the 2 percent floor and costs that aren’t. Treas. Regs. Section 1.67-4(c)(2) provides, however, that if a bundled fee isn’t computed on an hourly basis, only the portion of that fee attributable to investment advice will be subject to the 2 percent floor. The remaining portion of such fee isn’t.

Treas. Regs. Section 1.67-4(c)(4) generally allows a fiduciary to use any reasonable method to allocate a bundled fee between costs that are subject to the 2 percent floor and those that aren’t.

However, the amount of any payment out of the fiduciary’s fee or commission to a third party for expenses subject to the 2 percent floor, and of each separately assessed expense commonly or customarily incurred by an individual, are readily identifiable, so the reasonable method standard doesn’t apply to these amounts.

Under Treas. Regs. Section 1.67-4(c)(4), facts to consider in determining if an allocation is reasonable include the percentage of the value of the principal subject to investment advice, whether a third party advisor would have charged a comparable fee for similar advisory services and the amount of the fiduciary’s attention to the trust or estate that’s devoted to investment advice as compared to dealings with beneficiaries, distribution decisions and other fiduciary functions.

Fiduciaries charging bundled fees must proceed carefully in allocating (unbundling) those fees between those attributable to services that may be commonly or customarily incurred by an individual investor and are, therefore, subject to the 2 percent floor and other services. In the allocation process, while taking into consideration the facts outlined in Treas. Regs. Section 1.67-4(c)(4), a fiduciary should be very attentive to how its fee for acting as a trustee holding and administering a given portfolio would compare to the fee it would charge for serving only as an investment advisor with respect to the same portfolio. If there’s not a meaningful difference between these two fees, the fiduciary will be challenged to make a cogent argument that its trustee fees aren’t largely attributable to investment advice of the same character and quality as it would provide to an individual investor and so are, to that extent, subject to the 2 percent floor.

Putting aside the desirability of minimizing the amount of fiduciary fees that are subject to the 2 percent floor, there should be a meaningful difference between the two fees referenced in the preceding paragraph. There’s a huge difference between acting as a trustee and acting as an investment advisor. A trustee has aggregate responsibilities that far transcend those of an investment advisor—including making mandatory and discretionary distributions to beneficiaries, addressing the needs of disabled beneficiaries and those in difficult or special circumstances, engaging in tax planning, allocating receipts and disbursements between income and principal according to legal standards and assembling and rendering fiduciary accountings.

The final regulations under Section 67 were originally to apply to taxable years beginning on or after May 9, 2014. However, recognizing that the May 2014 effective date didn’t give fiduciaries sufficient time to design and implement program changes to determine how to unbundle their fees between those that are subject to the 2 percent floor and those that aren’t, the IRS, on July 16, 2014, changed the applicability of the final regulations to taxable years beginning after Dec. 31, 2014. This shift was a welcome respite when the IRS announced it, but the effective date is now less than 60 days from the date of this article’s publication. Accordingly, any fiduciary who isn’t ready to implement an unbundled fees program on or before Jan. 1, 2015 needs to pick up the pace! That said, a fiduciary of an estate, or a trust as to which an IRC Section 645 election applies, which hasn’t yet selected a taxable year (admittedly, a narrow subset of all estates and non-grantor trusts) might consider seeking to delay the necessity to unbundle by making a fiscal year election resulting in a taxable year ending on Nov. 30, 2014 so as to cause unbundling not to be required both for that taxable year as well as the ensuing taxable year.