/sites/all/themes/penton_subtheme_wealthmanagement/images/logos/footer.png
Recent
Recent
Eight Must Reads for the CRE Industry Today (May 19, 2022)
May 18, 2022
Russian Billions Hidden in US Spur Backlash to Financial Secrecy
May 18, 2022
Mariner Wealth Advisors Expands in Michigan with Emerson Wealth Acquisition
May 18, 2022
Macquarie Alum’s GreenPoint Eyes $1 Billion for Real Estate Bets
May 18, 2022
Featured
The 10 Best and 10 Worst States in Which to Retire in 2021
Jul 15, 2021
Poll: 15 Classic Books on Investing and the Markets
Apr 03, 2020
Fifteen Must-Listen Business Podcasts for Advisors
Aug 14, 2020
Celebrity Estates: Jay Leno and Planning for Classic Car Collections
Feb 22, 2022
Tax Year in Review
brought to you by 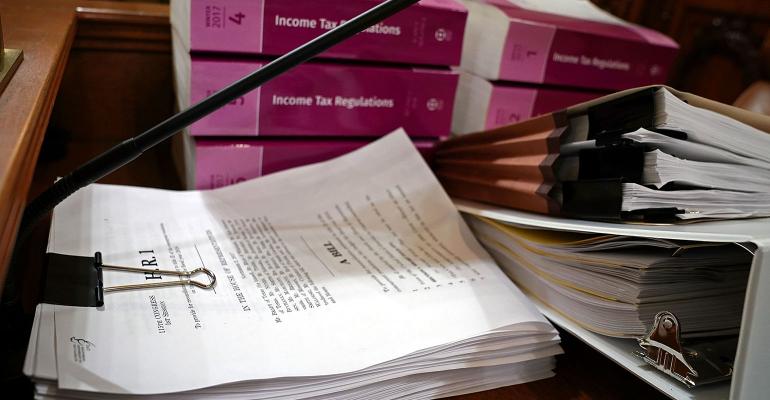 Trusts should remain popular regardless of what happens to the estate tax and generation-skipping transfer tax.

Depending on who one speaks with regarding the current status of the estate tax, one of the following two quotes might be appropriate. First, as Will Rogers once said, “the difference between death and taxes is death doesn’t get worse every time Congress meets.” Second, as President Ronald Reagan once said of the Tax Reform Act of 1986, “I feel like I just played the World Series of Tax Reform, and the American people won.” The federal estate tax has been repealed and has returned four times in our history. The most recent repeal occurred in 2010. If it’s repealed again, the likelihood of its return is high. The current estate tax rate is 40 percent on both individual estates over $5.49 million and married couple’s estates over nearly $11 million. These exemptions are due to increase to $5.6 million per person in 2018. Pursuant to the Tax Cuts and Jobs Act (the Act) issued by the House Ways and Means Committee on Nov. 2, 2017, the estate, generation-skipping transfer (GST) and gift tax exemptions would all double to $11.2 million per individual and $22.4 million for a married couple. On Nov. 9, the Senate followed up with their own tax bill, which matched the House’s proposal to double the exemptions for the estate and gift taxes (although silent on GST and stepped-up basis).

It’s important to note that, according to Chye-Ching Huang and Chloe Cho's “Ten Facts You Should Know About the Federal Estate Tax,” only 0.2 percent of all U.S. estates are expected to pay estate taxes in 2017. In 2017, the estate tax is projected to generate an estimated $19.7 billion in revenue. If the Act passes and the exemptions double in 2018, the number of individuals paying the estate tax and GST tax would decrease from roughly 5,000 to less than 2,000. The House’s proposal also calls for the repeal of the estate tax in 2024, which would decrease estate tax revenue by an estimated $172 billion over the next decade. However, importantly, the Senate bill doesn’t call for the repeal of the estate and GST taxes. As such, many advisors believe that estate tax repeal may never happen, but instead could be leveraged as part of the tax negotiations.

Is the Estate Tax Voluntary?

As Professor A. James Casner of Harvard Law School once stated, “In fact, we haven’t got an estate tax, what we have is, you pay an estate tax if you want to; if you don’t want to, you don’t have to.” In 2018, only about 0.1 percent are projected to pay the tax despite the proposed higher exemptions; however, estates exceeding the exemption can also avoid the estate taxes with proper planning. This may require the use of a “Kennedy trust,” that is, a testamentary charitable lead annuity trust (CLAT), combined with other powerful trusts, such as the dynasty trust. The CLAT gained popularity after the will of Jackie Kennedy Onassis became public. When Jackie passed away in 1994, her will devised most of her estate to her children; however, the plan was for her children to disclaim some of their inheritance to a testamentary CLAT that would last 24 years for the benefit of Jackie’s private foundation (PF). At the expiration of the trust term, the remaining trust principal would go to her grandchildren without being subject to any transfer tax, because the estate would generate an estate tax charitable deduction. The Kennedy children never disclaimed a portion of this bequest in favor of the CLAT, and therefore, the PF was never funded, and the enormous estate tax savings were never realized.Despite the Kennedy family not using the CLAT, CLATs can provide flexibility regarding funding at death and, if funded, provide enormous tax savings. Consequently, when they’re combined with other trusts and strategies, they can render the estate tax voluntary. Why do people volunteer to pay estate taxes? Two key reasons: 1) they’re not aware of all the planning vehicles available, and 2) their tax objectives don’t coordinate with their non-tax objectives.

Despite the proposed high estate, GST and gift tax exemptions and whether there’s repeal, trusts will remain extremely popular for many non-tax reasons, including:

It’s due to the above-mentioned non-tax reasons and state tax reasons that it may not be prudent to automatically pass assets, outright and directly, to one’s children even if the federal estate tax is repealed. Consequently, clients will continue to transfer assets to trusts, most likely GST and dynasty trusts. It’s important to note that the gift tax will most likely always remain to limit transfers and income tax shifting. The House’s proposal is for the gift tax exemption to double in 2018 and to remain when and if the estate and GST taxes are repealed effective Jan. 1, 2024. This increase provides a huge opportunity for families to fund trusts, as well as increase their funding for all of the previously mentioned reasons. Additionally, the gift tax rate would drop from 40 percent to 35 percent.

An interesting issue could arise regarding future GST tax planning if repeal were to occur: Namely, how would GST tax planning work with trusts established after repeal? Also, in planning for the possibility that the GST tax could return, flexibility and proper drafting would be crucial to take advantage of GST tax repeal, but avoid possible issues with any past or future legislation. This was also an issue discussed back in 2010. If the estate and GST tax are both repealed, there may be four scenarios for GST issues during the repeal year and beyond:

President Donald Trump released his guidelines for a tax plan to take effect in 2018. The House and Senate both followed with their own proposals. President Trump called for total repeal of the estate and GST taxes and was silent on step-up in basis. The House proposal calls for a doubling of the estate, GST and gift tax exemptions to $11.2 million per person and phase out repeal of the estate and GST taxes in 2024. It also calls for step-up in basis.

The Senate’s proposal was released on Nov. 9, 2017. While the Senate’s proposal does match the House’s doubling of the estate and gift tax exemptions (although silent on GST and step-up in basis), it doesn’t call for the elimination of the estate and GST taxes by 2024. Consequently, whether the final bill calls for total repeal is likely to be the subject of negotiations between the two chambers going forward. The Republicans have only 52 seats in the 100-member Senate and little hope of Democratic support or even enough Republican support. Many senators oppose the tax bill because it adds to the deficit. Susan Collins (R-ME) recently said that she cares about the debt but doesn’t want the tax bill to “blow a hole” in the deficit.16 She went on to say that “certain tax cuts done right will increase economic growth” and produce revenue. GOP lawmakers indicate that the tax bill may add up to $1.5 trillion to the federal deficit over the next decade, but also argue that the economic growth as a result of the income tax cuts will boost tax revenues over that time, thus compensating for the gap. Many experts claim that a 1 percent increase in annual gross domestic product growth will translate to $3 trillion in extra tax revenues. Despite these expert opinions, some Republicans and many Democrats don’t want to add to the deficit at all and remain resistant to the idea that tax cuts might stimulate economic growth and thus increase tax revenue that would compensate for the immediate deficit increase. The Byrd provision in the Senate requires 60 votes to enact any law beyond 10 years. Otherwise, any new legislation may be phased out after that 10-year period. Consequently, legislation could pass with 51 votes so Republicans can’t afford too many non-supporters.