/sites/all/themes/penton_subtheme_wealthmanagement/images/logos/footer.png
Recent
Recent
Why the Shift to a Longer-Term ‘Business Owner’ Mentality Is Driving Movement
May 27, 2022
NYC Luxury Theft Boss Planned Own ‘Department Store,’ City Says
May 26, 2022
Seven Must Reads for the CRE Industry Today (May 27, 2022)
May 26, 2022
What’s the State of the Capital Markets for Cannabis Real Estate?
May 26, 2022
Featured
The 10 Best and 10 Worst States in Which to Retire in 2021
Jul 15, 2021
Poll: 15 Classic Books on Investing and the Markets
Apr 03, 2020
Fifteen Must-Listen Business Podcasts for Advisors
Aug 14, 2020
Celebrity Estates: Jay Leno and Planning for Classic Car Collections
Feb 22, 2022
Heckerling Institute on Estate Planning
brought to you by 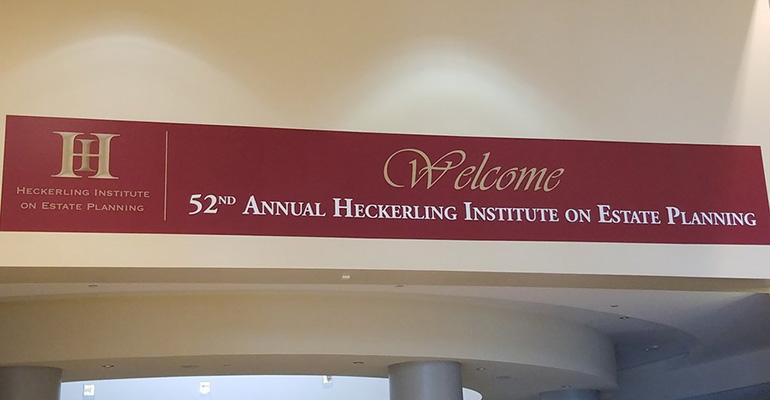 Not all cases are created equally.

During his presentation at the Heckerling Institute on Estate Planning on Tuesday, S. Andrew Pharies, partner at DLA Piper in San Diego, advised attendees to identify high risk cases at the outset of any potential representation. “There are clues to look out for,” Andrew warned. “A client who wants to disinherit a beneficiary, who wants unequal distributions among people of the same class, who has multiple marriages and children from different spouses and especially, a client who leaves a long-term advisor—these are big red flags.”

The most important question you’ll ask yourself in a high risk situation is, “Should I take the case?” These high risk cases become the “notorious” cases and bring with them a high risk of being fired. Moreover, there’s a high likelihood that litigators will closely scrutinize your work product. Should you decide to take on a difficult case, go into it with your eyes wide open.

Begin With the End First

“Begin with the end in mind,” advises Andrew, which means that in the end, you want to ensure that a court upholds the validity of the documents you drafted. Ask yourself, “What do I need to do during this case to make this end a reality?” You have the power to “create” the case and make sure that your documents will withstand a challenge.

First, you’ll need to defeat a challenge for lack of testamentary competency. This concept is defined as the testator understanding the nature and extent of his property; the natural objects of his bounty; the disposition he desires to effect through his will; and that the document he’s signing is a will intended to dispose of his property at death. Competency is measured at the time the document is executed.

There are two component to creating a strong record of testamentary competency and no undue influence. The first is the medical evaluation: Hire a medical professional to evaluate your testator’s cognitive abilities.  Have a physician review the medical records and have him test the testator up to the legal standard of competency. Provide the legal standard to the medical expert, then memorialize the results in a written report and include a HIPAA waiver to allow you, on the death of your client, to distribute the report.

The second element is a third-party interview to ensure that there’s no undue influence. Andrew advises that for this interview, it’s better to hire an objective person with credibility and who’s well-known to the courts.  While this may be expensive, it’s worth it to protect the estate plan. After the interview, have your client sign a waiver so that the report can be distributed after his death.

Addressing whether it’s wise to videotape the execution of the testamentary documents, Andrew noted that there’s no consensus on this issue. His view is that while a videotape is very powerful, what happens on a video can overcome reason. Importantly, ask what the testator’s purpose is to videotape the execution of the documents. Is it to dissuade a potential beneficiary contest? Or, is it to preserve the execution as evidence in the event of litigation.  If it’s the latter—a videotape is hearsay, although in some states, it can fall into an exception to hearsay. Regardless of the reason, if a testator has no impairments, (no ticks, no anxiety, etc.) then consider videotaping because it’s powerful. However, if there’s anything that’s “off” about the testator (stage fright, speech impediment, etc. ) “stay far away from video because it can be prejudicial,” warns Andrew.  If you do decide to do a video, use a professional videographer and establish a chain of custody from the taping into the file.

Is there anything you can do to prevent litigation from happening in the first case? Yes: employ a no contest clause—a forfeiture clause to disinherit a person. Importantly, you’ll need to give that person something substantial that causes him to be unwilling to put his inheritance on the line. Be clear to define the triggering act of a no-contest clause.

Indeed, the most effective defense to intentional interference with a testamentary expectancy is a broad no-contest clause, which expressly includes pursuing the tort as a disqualifying event, regardless of who’s the defendant or target, coupled with a direction to the executor and trustee to defend the tort and pay for the defense out of the estate or trust.

What if you have a testamentary plan that will disappear relatively early on?  In that instance, elements of flexibility (such as decanting, modifications, etc.) actually disrupt testamentary intent. It’s important, then, to ascertain what the client desires. If it’s to preserve his testamentary plan, then include explicit provisions in the document to prevent these modifications from happening, such as “no decanting; a trustee can’t consent to modifications,” etc.

Consider using a business entity to provide for the management of a difficult beneficiary’s inheritance. Using a business entity allows broad exculpation clauses, forum shopping, a heightened ability to exculpate a trustee and indemnification of a  trustee. Make sure the trustee and business manager aren’t the same person if your state would impose a fiduciary duty on the business manager.

Include arbitration as a mandatory provision in the document. This can be a powerful tool, because you create the rules, pick the forum and select the judge. In some states, you can even modify the rules that apply in arbitration.