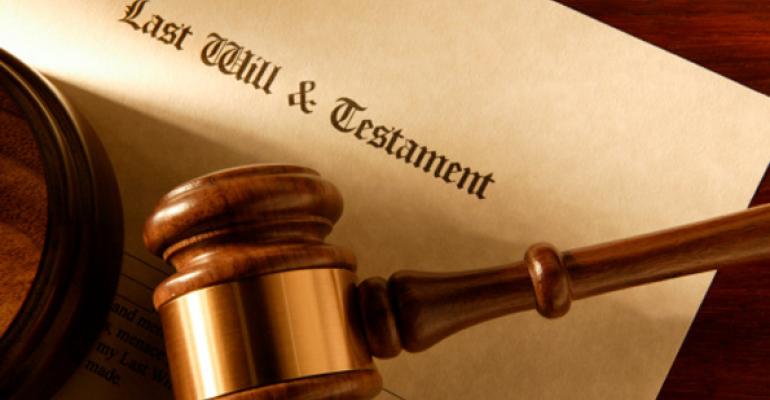 Did Decedent’s New Will Revoke Trust?

In Florida, if someone writes a letter or scribbles on a napkin that they're no longer interested in maintaining their revocable trust, is that admissible evidence of their intent to revoke the trust?

In Bernal v. Marin,1 the court faced a question of first impression when it analyzed the trust revocation statute, Section 736.0602(3), Florida Statutes. In doing so, it answered that question and more.

In 2004, Renee Maria Zintgraff executed a revocable trust that named her cousin, Christiane E. Marin, as the successor trustee on her death. The trust was called the “Renee Maria Zintgraff Revocable Living Trust,” and it provided that when Renee died, Lisa Cardozo was to receive $5,000, and the remainder of the trust was to be divided and distributed to three animal life organizations. Renee funded the trust with her house and her brokerage account, both of which were titled in the name of the trust. And she specifically reserved her right to revoke the trust. The trust, however, was silent with respect to a particular method of revocation.

In 2008, Renee met with an attorney, Sara Saba, and executed a will that completely changed her plans. The will named Oscar F. Bernal as the personal representative, and it left all of Renee’s tangible and residuary property to Oscar. Significantly, the will provides as follows: “I, RENEE MARIA ZINTGRAFF, a resident of Miami-Dade County, Florida, and a citizen of the United States, declare this to be my Last Will and Testament, revoking all other will, trust and codicils previously made by me.” (emphasis added). So while the will references a trust, it didn’t specifically name or reference the Renee Maria Zintgraff Revocable Living Trust.

Does Will Trump Trust?

Renee died in 2013, and a fight broke out between Christiane (the trustee) and Oscar (the personal representative). Each side argued for disposition of Renee’s assets in accordance with the testamentary instrument of which s/he was the fiduciary. After a motion for summary judgment was filed and heard, the trial court ruled in favor of Christiane and the trust. The trial court held that because the will didn’t expressly refer to the trust, or specifically devise her house and her brokerage account, it didn’t act to revoke her trust. The appellate court, though, disagreed and reversed the final judgment.

Evidence of Intent to Revoke Trust

Florida law permits revocation of a trust in three ways. First, the law allows one to revoke by substantial compliance with the terms of the trust.2 Here, the trust provided no such method of revocation.

And, third, one can revoke by “[a]ny other method manifesting clear and convincing evidence of the settlor’s intent.”4 According to the Florida appellate court, this option applied to the will that Renee signed and, when coupled with the additional evidence in the case, it amounted to significant evidence that Renee intended to revoke her trust.

That additional evidence was Sara’s deposition testimony and an affidavit of Gary Tacon, Renee’s close friend. Sara testified that there was no doubt in her mind that Renee wanted to revoke the trust. She said that Renee didn’t provide her with a copy of the trust, but she wanted it revoked and that since its execution, she had developed a close relationship with Oscar. In short, the trust no longer represented her wishes.

Gary’s sworn affidavit said that he had known Renee for 44 years, and they remained close until her death. He had gotten to know Oscar, and believed Oscar genuinely cared for Renee. On several occasions, Renee let Gary know of her intentions—to leave everything to Oscar.

The appellate court found that, when taken together with the language in the will, Sara’s deposition and Gary’s affidavit, if unrebutted, were highly compelling evidence of Renee’s intent.

The trial court wouldn’t consider the will because it didn’t specifically reference the trust or its property, and the third option under the law, “any other method,” necessarily meant any other method besides the will. But the appellate court rejected this interpretation, in part, because it strains logic. The court pointed out that, under Florida case law, no magic art or language is required to revoke a trust. Had Renee written a letter or scribbled on a napkin that she no longer wished to leave her property as provided in the revocable trust, the “any other method” option would certainly be applicable and Renee’s wishes would have been considered. If the note or napkin manifested clear and convincing evidence of her intent to revoke the trust, or if putting this together with other indicia of her intent manifested clear and convincing evidence, the trust would be revoked.

Here, the evidence at issue was arguably stronger than a written letter or scribbled napkin. It consisted of a will, drafted by an attorney, executed by the testator and witnessed and notarized. Plainly, that’s admissible evidence, worthy of consideration when determining a testator’s intent. And when combined with the other evidence in the case, it might very well be clear and convincing evidence of her intent to revoke the trust.