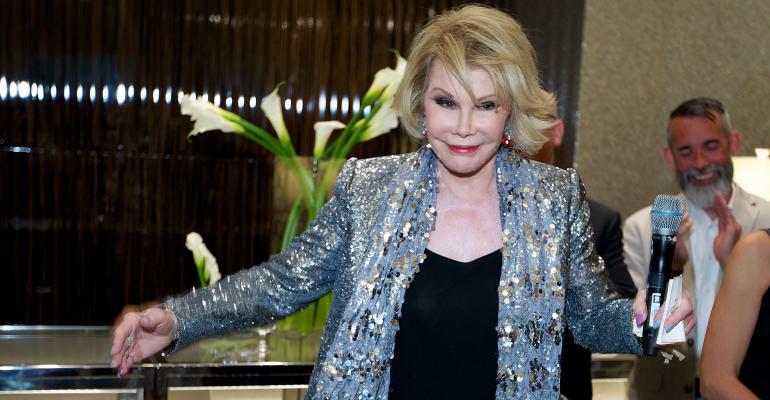 Will New York try to take a final death-tax bite in the estate of Joan Rivers?

When comedian Joan Rivers passed in September, she graciously left her estimated $150 million estate to family, friends, employees and charities.  But the specifics of her dispositive provisions remain largely unknown because the bulk of her estate was unobtrusively left to a blind trust.

More conspicuously, however, the will of the bicoastal Joan unmistakably stated from the outset that she was a resident of New York, but then straightaway declared her state of domicile (“where I intend to reside indefinitely on a permanent basis”) to be in California.

Before Joan was finally laid to rest in Glendale, Calif., her similarly bicoastal will was filed in New York State Surrogates Court.  The will also contained a provision that its validity, interpretation and administration shall be governed by New York; provided that if Joan was domiciled in California, then California law shall apply.

Ordinarily, wills are filed and probated in the state county where the decedent was domiciled, so what exactly is going on in New York?  We can only speculate.

Maybe the executors sought after New York for a less costly and less complex probate process for personal property assets or to handle a probate for real property located in New York?  Or perhaps it was important to the executors to establish a solid jurisdictional footing in New York in pursuing a wrongful death claim against Yorkville Endoscopy?  Or could it be that good old tax minimization—with a Hannah Montana and Miley Cyrus, “Best of Both Worlds” outcome, was the intended result?

From an income tax standpoint, the late Joan may have wanted to be taxed on her non-sourced California income as a resident under New York law.  Even though New York is known as the state with the highest tax burden, Joan may have actually paid less in taxes in New York as a top earner (8.82 percent New York State tax plus 3.876 percent New York City tax), as compared to California’s more onerous 13.30 percent for its uppermost earners.

More importantly, from an estate tax perspective, the estate would very much want to avoid New York’s burdensome estate tax and to benefit from the laws of California, which hasn’t had a state estate tax for those domiciled there since Jan. 1, 2005, when it was phased out under the provisions of the Economic Growth and Tax Relief Reconciliation Act.

Should New York law prevail, however, the estate tax stakes could be in the tens of millions.  The estimated value of Joan’s estate vastly exceeds New York’s current estate exemption amount ($2,165,625) by more than 5 percent, and thus, the exemption is forfeited.  Therefore, there would be taxes due on the full value of her estate, at a top rate of 16 percent when the estate exceeds $10 million.

Even if Ms. Rivers was a non-resident of New York and not domiciled there, if she owned real property (for example, if her penthouse was considered a condo) or tangible personal property in New York, then New York may levy a separate estate tax against that property. Further, if Ms. Rivers’ penthouse (condo) were owned in a single-member LLC or in a revocable trust, New York State taxing authorities have issued Advisory Opinions advocating that they would tax and treat ownership of the intangible as ownership of the underlying real property. Note, however, if Ms. Rivers’ penthouse were a cooperative, then New York courts and the Department of Taxation and Finance have held that an interest in a New York cooperative apartment is intangible personal property and is exempt from New York estate tax.

For the state estate tax purposes, whether the laws of New York or California apply may often turn on which state Ms. Rivers was deemed to be domiciled in at the time of her death.

Is My House Also My Domicile Home?

As a general rule, while an individual can have many residences, she can have only one domicile.  A person may be considered a resident of the state where she currently lives (New York), but still be considered domiciled in another state (California) where the individual intends to return.

Domicile is typically a question of fact based on the individual’s intent to remain in, or return to, a particular state and her permanent place of abode.

In California for income tax purposes, she would have been presumed to be a resident if she spent in the aggregate more than nine months there, but she still could have been domiciled in New York. As stated by the California Court of Appeal, "domicile" is the one location with which, for legal purposes, a person is considered to have the most settled and permanent connection.  It is the place where they intend to remain and to which, whenever they are absent, they have the intention of returning. See Whittell v. Franchise Tax Board, 231 Cal.App.2d 278 (1964).

While no one factor is determinative of domicile, courts generally look to a variety of circumstances such as:

Domicile is sticky, and once established, it’s not easy to change even though an individual may have a multiple residences.  There must be an objective intent to abandon the old domicile and to establish a new one.

Individuals who relocate to other states or individuals with residences outside their state of domicile would do well to maintain accurate, reliable records to support the contention that they aren’t residents of or domiciled in a particular state and to retain such documents for several years.  Maintaining contemporaneous diaries and detailed corroborating records as to one’s daily whereabouts can prove to be determinative.

It’s because the burden of proof in tax matters is often on the taxpayer that reliable records are so important.  Should New York’s Department of Taxation and Finance decide that Joan was domiciled in New York State, the estate could bear the burden of proving that she wasn’t.

There’s nothing that bars New York State from independently asserting that Joan was domiciled there.  Joan’s pronouncement of being domiciled in California can easily be viewed as self-serving and may not ultimately be found to be in line with the objective facts.

It should be noted that the Constitution doesn’t prohibit double taxation; there’s no “double jeopardy” when it comes to taxation.  Two or more states could each conclude that it’s the taxpayer’s state of residence.  In fact, notwithstanding multi-state tax offset/credit agreements, double taxation is a real risk for a taxpayer treated as a dual resident.

Likewise, there’s nothing that constitutionally prohibits two or more states from independently deeming a decedent as domiciled in their state for estate tax purposes.

While there are a bevy of cases supporting this premise, none is more famous or punitive than the estate of Campbell Soup capitalist, Dr. John T. Dorrance.

John, president and founder of the Campbell Soup Company and originator of the canned soup industry, died on Sept. 21, 1930 in New Jersey.

Preoccupied with saving inheritance taxes and ensuring that his family would retain sole ownership of the Campbell Soup Company, John wrote six versions of his will and added nine codicils.  However, on his death, both New Jersey and Pennsylvania each assessed an inheritance tax against his estate, which at the time was worth more than $115 million.

Five years before his death, John, who was then domiciled in New Jersey, purchased another residence in Pennsylvania, where he and his family lived most of the time.

The court disagreed and directed the assessment of a transfer tax of some $17 million under the premise that John was domiciled in Pennsylvania at the time of his death.  Thereafter, the estate appealed to the U.S. Supreme Court, which refused to grant a hearing.

Ironically, it was those well-orchestrated arguments proffered by the estate to the Supreme Court of Pennsylvania that New Jersey seized on in successfully enforcing its own inheritance tax.

In the same way, the Supreme Court of New Jersey ultimately determined that John was domiciled in New Jersey and that Pennsylvania had no jurisdiction to levy an inheritance tax.  The estate again appealed to the U.S. Supreme Court, which once more refused to hear the case.

The law is well settled that in the determination of domicile, a person’s expression of desire may not supersede the effect of his or her conduct. Recitals in wills are not given particular weight in determining domicile in comparison with the evidence supplied by the daily life of the individual and his or her acts and conduct.

The estate of Dr. Dorrance experienced horrendous multi-state death tax consequences which the estate of Joan Rivers need not fear since California has no inheritance tax.

If California was truly Ms. Rivers’ place of domicile then Joan must have had the intention of making California her true, fixed, permanent home and principal establishment. But questions regarding her residency and true place of domicile likely remain. Did Joan change her residency and/or her domicile to New York when she moved from Los Angeles to Manhattan in 1988? If so, did she successfully change her residency and/or domicile back to California when Joan co-hosted the E! celebrity fashion show Fashion Police and starred in the reality series Joan & Melissa: Joan Knows Best? (2011-2014) with her daughter Melissa Rivers?

Most importantly, was California where she reportedly occupied a bedroom in Melissa’s home her permanent place of abode where she had the most settled and permanent connection to, or was that connection more temporary and transitory? Could it be that the connection needed for domicile was still in New York with her Manhattan penthouse for the native born New Yorker?

Perhaps Joan in her last big interview might have provided us with a domicile clue. In late July of 2014, Joan Rivers spoke candidly to reporter, Tim Teeman of The Daily Beast at The Russian Tea Room in New York City. When Teeman asked Ms. Rivers about not working and just living off her money, Ms. Rivers responded, “I don’t have money to do that.  I could pull my living in and live OK, but I don’t want to live OK. I’m very happy to live in my penthouse, very happy I can pick up a check, very happy to have a great life, and be able to spread my wealth a little bit.”

Most assuredly, Joan’s advisors urged her to act accordingly and to maintain accurate, reliable records that bolster her will’s contention that she’s domiciled in California.  We can almost see the plethora of banker’s boxes that are now piled high.

Regarding death, Joan once cracked, “When I die (and yes, Melissa, that day will come; and yes, Melissa, everything’s in your name), I want my funeral to be a huge showbiz affair with lights, cameras, action. I want Craft services, I want paparazzi and I want publicists making a scene! I want it to be Hollywood all the way.”

Considering the fanfare and massive tabloid coverage surrounding Joan’s death, she likely received the Hollywood send-off she once joked about.  Those tending to her estate’s affairs may feel much more solemn—perhaps wishing that New York lets Joan, in her accustomed fashion, have last word as to her state of domicile.

Charlie Douglas is a Senior Vice President for a leading global wealth management institution and is a co-editor of the National Association of Estate Planning Councils' Journal of Estate and Tax Planning.

Adapted from an article from LISI (Leimberg Information Services, Inc.).‎