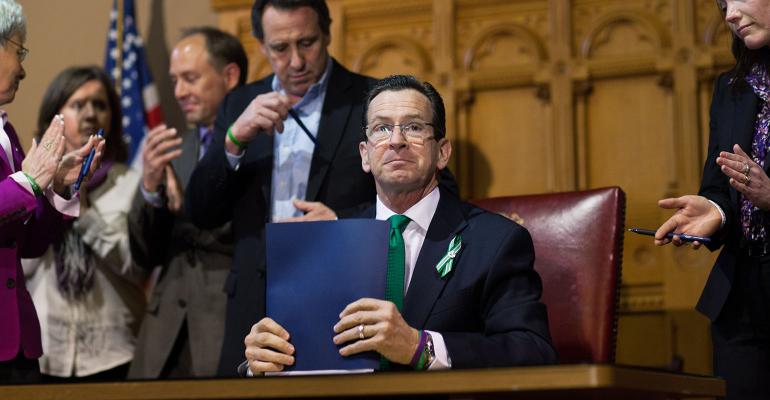 Affluent Connecticut residents have another reason to be thankful.

On Oct. 31, Gov. Dannel Malloy signed Connecticut Senate Bill 1502 into law. The law passed after months of political deadlock, drama and dysfunction, which included the governor’s veto in September of a budget bill passed by the Republicans with the support of some Democrats from districts adversely impacted by their own party’s proposals. Governor Malloy remained skeptical over Senate Bill 1502, but it was a bipartisan compromise passed with a veto proof majority, so he ultimately signed the legislation, though exercising his power to line item veto a provision related to a hospital tax.

Senate Bill 1502 represents an important shift in Connecticut’s treatment of affluent individuals. Connecticut once was able to hold itself out as a tax friendly jurisdiction compared to the surrounding states. However, over the years, Connecticut not only introduced an income tax but also has gradually increased it with the top bracket currently at 6.99 percent. Further, a factor that drives affluent individuals from the state is that it has one of the most (if not the most) hostile transfer tax system in the nation. Connecticut is the only state that imposes a gift tax, and its exemption in 2017 is only $2 million. Senate Bill 1502 didn’t raise the income tax rates, and while it didn’t repeal the gift and/or estate tax, it did raise the exemption amounts. Here’s a brief overview of the changes made to the Connecticut transfer tax system that provide opportunities to clients with ties to Connecticut.

As the only state in the nation that imposes a gift tax and has an estate tax exemption that’s more than $3 million less than the federal exemption, Connecticut wasn’t competitive with other jurisdictions, including neighboring states such as New York and New Jersey. For example, in every other state in the country, an individual could make lifetime gifts up to $5.49 million in 2017 and pay no federal or state gift taxes. However, if a Connecticut domiciliary made Connecticut gifts in that amount, there would be a Connecticut gift tax liability of $273,300.

Connecticut has a progressive rate for estate and gift taxes that increases based on the amount transferred. While there were minor increases in the lower tax brackets and changes in how the rates are applied, the top estate and gift tax rate remains 12 percent and applies when cumulative transfers exceed $10.1 million. One item to note about the new rate tables is that in 2020, the transition from one tax bracket to the next will no longer be gradual. Instead, the entire taxable value of a gift or estate will be taxed at a single rate. For example, under the prior rate schedule for a transfer of $11 million, the amount of the transfer falling within each bracket would be taxed at the corresponding rate, with only the amount over $10.1 million taxed at the maximum rate of 12 percent. Beginning in 2020, for that same $11 million transfer, the entire amount over the federal exemption would be taxed at 12 percent. As a result, taxpayers who are just above a bracket threshold will face a noticeable increase in tax over taxpayers just below that threshold. Thus, while there’s no “estate tax cliff” as in New York, where even amounts under the exemption amount are taxed, there are what can be described as rolling hills as the value of an estate goes up the brackets. While the old application of a gradual increase in rates applying to an estate would be preferable, the increased exemption amount yields an overall improvement.

Beginning in 2016, Connecticut implemented a cap on the maximum amount of gift and estate taxes a taxpayer would have to pay to Connecticut. The original cap was $20 million, which currently equates to lifetime post-2016 Connecticut gifts and transfers on death of approximately $170 million. The new legislation reduces the cap to $15 million starting in 2019, which translates to approximately $130 million based on 2019 tax rates.

Procedural Change to Release of Liens

The legislation includes various provisions regarding filing requirements to conform to the increased exemption amounts. Additionally, for estates required to file estate tax returns with the Department of Revenue Services, it will now be the DRS and not the Probate Court that will issue a release of estate tax lien on real property. This raises an interesting question regarding the fees imposed by the Probate Courts. In Connecticut, while a decedent can avoid opening probate by titling assets with rights of survivorship, payable on death, or in a revocable trust, a decedent can’t avoid the Probate Court’s fees. Estates are required to file a copy of the estate tax return with the Probate Court, even if no probate is needed, which will generate the same fee as full probate proceedings would. Connecticut’s Probate Court fees are very high, with a maximum fee of $40,000 for all estates in which the gross estate for estate tax purposes is $8,877,000 or more. Query the justification for what’s effectively a second death tax when Connecticut charges an estate $40,000 when the only act the court will now take is issuing a release of lien for that very same fee.

The new legislation creates some practical concerns for both taxpayers and practitioners based on the wording it used to define the federal exemption amount. For Connecticut estate tax purposes, the federal exemption amount is defined as “the dollar amount published annually by the Internal Revenue Service at which a decedent would be required to file a federal estate tax return based on the value of the decedent's gross estate and federally taxable gifts.”(1) Internal Revenue Code Section 6018 imposes the requirement to file an estate tax return and has a formula to determine the filing threshold. However, there isn't one threshold but two—one for U.S. citizens and domiciliaries (currently $5.49 million) and one for decedents who aren’t citizens or domiciliaries of the United States (currently $60,000). Previously, as well as in 2018 and 2019, Connecticut had the same exemption amount for all decedents, but the estate tax would be calculated on the decedent’s worldwide estate and then reduced based on the percentage of real and tangible property in Connecticut when compared to the worldwide estate. It would be a harsh change for decedents who aren’t domiciled in or citizens of the United States to continue to compute the tax in this fashion but have an exemption that’s millions lower, yet the language creates room for argument that the statute calls for this result.

An issue that will impact more taxpayers is that by linking Connecticut’s exemption to the one published by the IRS, a potential repeal of the federal estate tax, which is now being discussed in Washington D.C., could have an impact. In the event that a repeal of the estate tax occurs, it’s unclear how the new legislation would function. Unlike New York, which copied the exemption formula in the IRC into its own statute, which means it would survive a potential federal estate tax repeal, arguably a federal repeal would effectively be a repeal of Connecticut’s estate tax, as there would be no dollar amount published by the IRS each year.

Enactment of Senate Bill 1502 helps bring Connecticut in line with nearby states, making Connecticut a more attractive long-term home for the wealthy. While technical issues exist and changes to federal tax law may have an impact on Connecticut residents, there’s no questioning that the legislation is a significant improvement for affluent Connecticut residents. The obvious planning point is the increased exemption amounts allow for additional tax free transfers to be made starting in 2018 for those who haven’t previously given more than $2 million. However, there are also planning opportunities for those who have paid Connecticut gift taxes previously given that those taxes create a credit. For those who’ve made taxable gifts up to the federal exemption amount ($5.49 million), they would have already created a Connecticut gift tax liability of $273,000. With the credit for gift taxes paid, that client could gift up to the 2018 federal exemption amount ($5.6 million) without triggering additional Connecticut gift taxes because the taxes previously paid ($273,000) are greater than the taxes owed on $5.6 million of lifetime transfers with the increased exemption amount ($245,000). Those who advise Connecticut residents should be in touch with their clients to determine what opportunities will be there for them in the new year.