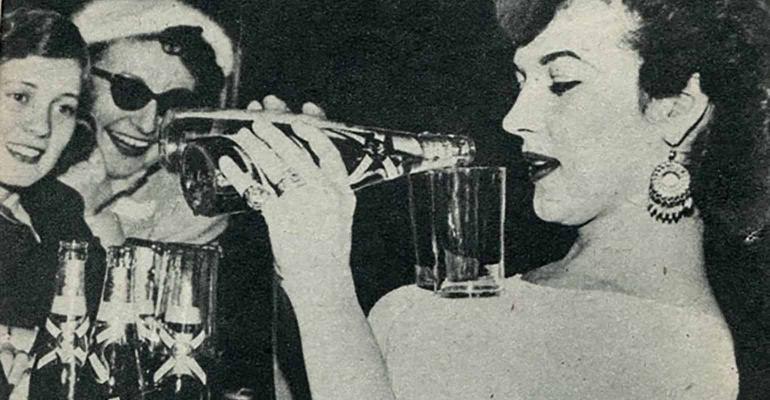 Postmortem publicity rights take center stage in a recent lawsuit over use of a well-endowed local celebrity’s image.

A recent court case out of Iowa involving the estate of a “buxom barmaid,” a state senator and a brewery has taken an interesting turn. Ruthie Bisignano, owner of Ruthie’s Lounge, a Des Moines bar, garnered nationwide attention in the 1950s. Her claim to fame? She was able to fill two glasses of beer balanced on her chest and serve them without using her hands. The bar called it “the well-balanced beer.” Ruthie closed the doors to her tavern in 1971, but she remained famous for her serving trick. She passed away in 1993 after suffering from illness.

In 2012, Exile Brewing Co. used Ruthie’s name and likeness to market a new beer—the “Ruthie” featured labels with an artist’s rendition of her beer-balancing skills. The “Ruthie” went on to become the best-selling Iowa-made beer in the state, with an annual production of over 7,000 barrels.

In 2020, Ruthie’s heirs sued Exile for using Ruthie’s identity without permission or compensation, seeking damages for misappropriation of name and likeness; misappropriation of trade values; consumer fraud; deceptive marketing; and right of publicity. The case was recently amended to include a claim of federal deceptive marketing and false designation of origin, resulting in a transfer to federal court. According to the lawsuit, in addition to the “Ruthie” beer, the brewery also sells other merchandise featuring Ruthie’s likeness and regularly uses Ruthie’s persona, identity, and name to promote its goods and business.

The estate’s claims sound like par for the course, but drama has emerged following new allegations that Bob Tursi, Exile’s co-founder, has made threats against Iowa State Senator Tony Bisignano, who happens to be Ruthie’s nephew. According to a recent deposition, Sen. Bisignano claims that “Tursi followed him into a parking lot in the south side of Des Moines and shouted, ‘You are getting nothing,’ adding, ‘I ought to get out and beat your ------- ---.'” In his defense, Tursi said he was simply inquiring why the Senator, an heir of the estate, would go after his small business, especially during these tough times (because of COVID-19).

As a result, the estate filed a motion asking that Tursi be prohibited from threatening or intimidating witnesses, attending depositions or communicating with state Sen. Bisignano. Exile’s lawyers of course objected, claiming the estate’s essentially seeking a “restraining order or permanent injunction preventing any Exile representative from participating in their own defense.”

Does the estate stand to prevail on their claims? According to Benny Roshan, a partner at Greenberg Glusker in Los Angeles, “Ruthie died intestate, which means her heirs inherited her wealth. Whether that wealth includes her right of publicity is an open question.” The answer is likely state-specific.

“The administrator of Ruthie’s estate will likely argue the Iowa court should continue what seems to be the national trend and recognize the postmortem right under the common law. The litigation between the estate and Exile Brewing is just beginning, but it would not be surprising if the court eventually recognized Ruthie’s postmortem right of publicity and granted her estate relief.”

Regarding whether Ruthie’s estate can successfully prevent Tursi from participating in litigation proceedings such as depositions and hearings, “that’s not likely to happen,” opines Roshan. “Tursi is a party litigant with a right to attend legal proceedings. However, this right doesn’t extend to harassment of a public figure who is entitled to legal protections on account of his political position.” According to Roshan, it’s far more prudent for Tursi to keep this fight in the courts where it belongs rather than the streets.

“Indeed, doing so is a boob move – not the sort of gravity-defying stunt that brought the boys to the bar like Ruthie Bisignano, but the unhinged vigilante kind that no one likes to see or experience,” says Roshan.