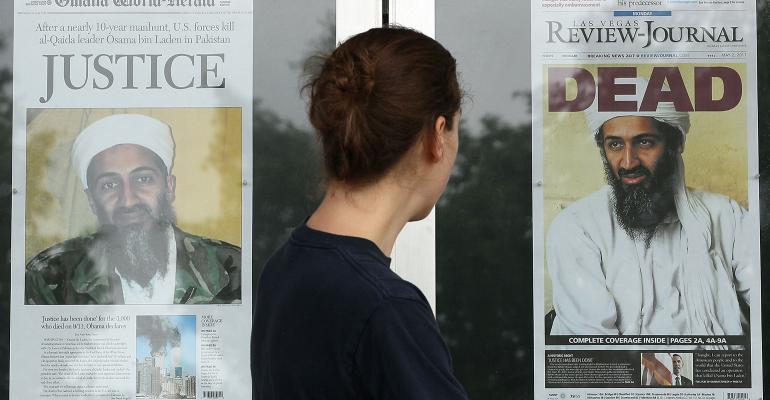 <p>Osama Bin Laden was killed in a raid in Pakistan in May 2011.</p>
Wealth Planning>Estate Planning

The document reads as a fairly informal set of instructions to his estate’s representative.

Last week, the Office of the Director of National Intelligence released the latest tranche of documents seized from the May 2011 raid on Osama Bin Laden’s compound in Pakistan when U.S. Navy SEALS killed the infamous al-Qaida leader. Among the 113 documents made public on March 1, 2016 was the U.S. government’s translation of an undated handwritten document, signed “Usama bin Muhammad,” which is being referred to as Bin Laden’s last will and testament.

It’s well documented that Bin Laden’s money came from his father, a construction magnate, who for many years enjoyed a virtual monopoly on construction in Saudi Arabia. The true size and location of Bin Laden’s fortune at his death remains mostly a mystery, but in the document, Bin Laden claims to have had about $29 million in Sudan. He expressed his hope, for his “brothers, sisters, and maternal aunts” to obey his will and spend all of the money he had left in Sudan “on Jihad, for the sake of Allah.” Well, almost all of it. Bin Laden does provide for some specific bequests (1 percent of the total each) to certain friends and associates, in the event that they haven’t already received the funds during Bin Laden’s lifetime, and then promptly declares that the “conversation about the money in Sudan is over.”

Bin Laden then directs the payment of smaller sums to many of his uncles, aunts, sisters and children, specifying that the amounts be paid in either in riyals or in gold, depending on the bequest.

While aspects of the document are likely lost in translation, the document reads as a fairly informal set of instructions to the representative of his estate. However, there’s no indication as to who that lucky individual might be.

This isn’t the first document claiming to be Bin Laden’s final wishes. When the Director of National Intelligence released the last batch of Bin Laden’s documents in May 2015, media reports initially singled out one video file, recorded in 2008, which was described as Bin Laden’s video will in the form of a letter to one of his four wives. However, that letter was quickly re-attributed to one of his sons. Other documents purporting to be the al-Qaida leader’s will have been published by various Saudi and Kuwaiti media outlets in the past, but were quickly dismissed as fraudulent in each instance.