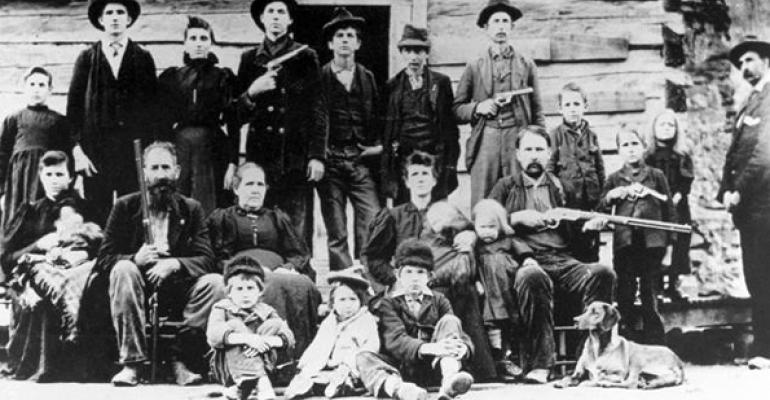 Fighting and its impact on wealth

When families feud, nobody wins.

What causes reasonable human beings to defy the advice of trusted advisors and lose sight of the costs of family fighting, not only in terms of money but vital family relationships and peace of mind?

Our industry often focuses on strong documentation as the most effective firewall against family feuds.  While a thorough paper trail will undeniably help lead to a positive outcome, there are a number of strategies that are powerful influencers.

A best-case scenario is exemplified in the recent Wall Street Journal article, “Inside the Breakup of the Pritzker Empire.”1  In that situation, the family experienced years of fighting and lawsuits but was ultimately able to successfully navigate the succession and keep the companies intact.  In fact, the value of the businesses doubled to $30 billion by 2011, a decade after the restructuring.

The critical ingredient for a positive outcome in the Pritzker case was that skilled advisors provided a guiding influence to manage the intense emotions and competing needs of the beneficiaries.

“By resisting the impulse to dispose of the assets in a fire sale to quell a family feud, people involved in the process kept the companies intact and helped boost their value,” Tom Pritzker said.

Yet, all too often we’ve seen the opposite happen, where family differences derail the process and destroy a family’s legacy.

We’ve identified five common dynamics that cause family disagreements and disputes.  By identifying these dynamics, we’ve been able to create strategies that advisors can use to prevent or mitigate the problems that can develop into a full-blown family breakdown.

Family feuding takes many forms and can be looked at through several different lenses, but for the purposes of this article, we’ll look at family feuding as it relates to the adult siblings, or G2, settling the estate.

1. The desire to win at any cost. Wanting to win means one family member feels right so someone else has to be wrong.  Winning is the only goal, yet it’s often a Pyrrhic victory.  In one situation, a woman lamented that she would have to share her inheritance with her father’s second family.

“I would rather spend all the money in legal battles than let them get any of it,” the woman said at the time.  “I don’t care how bad I feel, I have to win. If I give in, I lose, and I just can’t let that happen.”

Although the woman’s response was somewhat understandable, she failed to realize the consequences to her own financial health.  By seeking to win at any cost, she was throwing away her own inheritance.

2. A parent’s need to punish. Some adult siblings never forget lifelong squabbles or rejection.  Often these problems are caused by parental neglect or favoritism.

Consider the case of Ben, who never felt accepted by his father.  He had always been his Mom’s favorite. In a way, his Mom preferred him to his Dad.  So, when Ben got older, his father waged a war of ongoing criticism. Holidays were nightmares for Ben.

Ten years later, Ben was left out of the estate.  His dad left his money to Ben’s two older siblings.  Their mom had passed away some years earlier.

The siblings fought it out in court.  The estate, which began at $75 million, dwindled to $35 million after legal costs.

3. The fear of losing perceived gains. Often, family possessions take on heightened emotional value and become the focal point of a family’s battle.  In some cases, the actual value of these items – beyond sentimental importance – is relatively modest.  In other cases, of course, millions could be at stake.

In one scenario, siblings sought to hide millions in jewelry from the Internal Revenue Service after their mother’s death.  Fighting erupted over who would get the mother’s wedding ring.  Then, the brother gave the ring to his wife, triggering a family meltdown in the trustee’s office.  The trustee, who wasn’t aware of the plan, filed an amended tax return, and the siblings ended up paying steep fines and penalties.  In the family’s desire to hang onto the jewelry, they ended up paying dearly.

In another family, the siblings were divided over whether to sell $120 million in stock that their grandfather had purchased for pennies on the dollar back in the 1920s.  Two siblings wanted to hold on to the shares, and two wanted to sell.

The dispute escalated, with each side rigid in their beliefs. Their advisors encouraged the family to begin to sell to reduce the concentrated position, but no amount of discussion could break the stalemate.  Ultimately, a legal battle ensued, the stock fell in value and the family lost 95 percent of their money.

In one situation, an aunt who was the trustee for her late parents’ estate didn’t approve of her niece’s lifestyle.  Even though the niece was named in the will, the aunt tried to prevent the niece from inheriting.  The niece sued, ultimately receiving her share of the estate, but the court case cost thousands of dollars, and the two never spoke again.

In another family, the father was an entrepreneur who had created a business worth $250 million.  He had three adult children with his first wife and a 12-year-old daughter with his second, younger wife.  After he passed, it became necessary to sell the business to distribute the assets.

The families sought qualified appraisers, yet continued to stalemate over the price.  Feuding between the siblings and two families became so intense that forward movement was impossible.

One side wanted to take the bid, while the other side wanted to get more.  Feuding erupted, communications ground to a halt and everyone hired their own legal counsel.  Both families watched as the fees mounted and the value of the business diminished, until ultimately it was sold off for its parts.

In an attempt to be right, both sides lost sight of what they were losing in the battle.  For years after, each side blamed the other for the outcome, never seeing they both held some responsibility.

5.  A sense of entitlement. In many families, the children of first generation wealth can be inadvertently cast with a profound sense of entitlement.  The benefactors are often self-made men and women who overcame hardships growing up.  Incredibly focused and self-motivated, they want to provide a better life for their families and descendants.  The result is second and third generations are raised in what’s sometimes called a “luxury bubble.”  These younger family members may be more likely to want to rely on the family wealth rather than build their own careers.

Consider the case of Jane, the great-grandchild of a cyber mogul.  She has been feuding with her sister for 25 years. Her sister has two grown daughters.  Jane never married and has no descendants, so she knows that when she dies, the joint trust funds will be distributed to her sister’s children.  Jane, it would appear, has been determined to spend liberally, going through over $200,000 a month.  She is waging her family feud through the trustee, whom she approaches regularly for an increase in monthly disbursement.

An empowered third party with highly sophisticated diffusion techniques is essential to navigate strong emotion and help prevent millions of dollars in losses.

One of the most effective defusion techniques is to rebuild the link or emotional relationship between the benefactor who’s passed and the offspring.  It’s especially useful if you knew the benefactor, helped him create his estate plan and feel emotionally connected to carrying out the wishes of the benefactor beyond the grave.

We’ve found that the advisor is vastly more empowered as an instrument of the benefactor.

Whether you knew that person or not, drawing the line to the source gives you the power to navigate these choppy waters and defuse family feuds.  No matter what most beneficiaries may say, deep inside is a connection to their predecessor, either by love, reputation or desire to emulate them.

In addition, you can eliminate negative interactions between siblings, alleviate disputes over consumption and help reconnect them to their family history.

Using proper defusion techniques, you create more effective language and help focus your advocacy on your goal of conveying an atmosphere of balance and agreement.  It will remind the family of your strong relationship with the benefactor and help prevent personal attacks and criticism of you.

To make a personal connection you may want to say something like, “Jane, I can see that this is really important to you.  Your grandfather wanted nothing more than for all of you to be taken care of for the rest of your life.  This feuding violates his intention for you.

He was very clear about wanting you and those that come after you to be taken care of forever.  Let’s see if we can work together and do some creative problem solving so that all of you can win.”

It’s important for advisors to be flexible in all things. You can say, “I can see how you feel. Coming from your position this makes sense. I understand that this must be very difficult for you.”

Making it clear to a family member that he’s understood is a powerful defusion technique.

Then you can say, “Your father was attempting to avoid conflict between all of you. What he would want is for you to resolve this amicably.

You may not get everything you have imagined but you are getting something and giving up something so everyone will be able to ‘save face’ and move forward.”

It’s equally important to take care of yourself in these meetings.  We advise for example, not holding continual eye contact or you may come away feeling drained.  Take breaks, for everyone’s benefit.

Calling your own form of time out may defuse emotions. In that context, we suggest that you create a bit of space for yourself at meetings by gazing down and taking notes.  It gives you distance, and prevents the beneficiary from “pulling” on you emotionally.

In every meeting, get one agreement on at least one thing, even if it’s small.  Get heads nodding in the right direction and you will set the stage for the second agreement and the third, and so on.

Refocus the client continually about what’s really at stake.  Consider the perfect moment for you to ask the following question, “At the end of your life, would you like your sister holding your hand with beautiful memories or would you like money in your hand?  Perhaps you can have both.”

In human communication, there’s what you mean to communicate and then there’s how you’re coming across.  This is called the “subtext.”  Your words can be saying I want this or that, while your tone, pitch and body language could be saying, “You idiot, I’m not listening to you.”

The wrong subtext can make other people angry, defensive and shut down.  Their limbic brain gets activated, and they move into a fighting or defensive stance toward you.  They can no longer hear what you’re saying.

Find a way for everyone to “save face” by creating a way for them to be right about something.  It will give them a sense of winning, so they can forgive and let old wounds heal.

Keep the conversation ongoing and open.  In that context, solutions will be found.  Also, advocate nonattachment, which is the ability to truly let go.  As human beings, we can inadvertently feed off the drama.  Yet when we learn to let things go, it can help up transition through life’s changes.

And always remember that the gold standard isn’t just the documentation, it’s the relationship.  Leverage the relationship and you can have the power to unspool the anger, find the open road and to keep it open right through to resolution.  The family will be forever grateful to you.