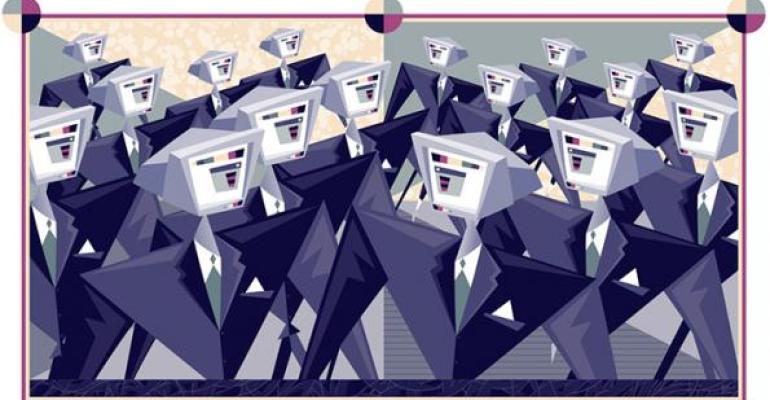 Literature on its potential impact is quite scarce.

Several months ago, we read a Facebook post about how the jobs that many people have today will not exist in ten years time. The post discussed topics ranging from anyone that worked in the transportation industry not having a job because all cars will be automated to many types of doctors not working because you will have a chip in your arm that will detect diseases before either the patient or a doctor could diagnose them today. It gave, in many respects, a very Draconian view of the world — raising questions about how we employ people in a world where computers and machines can do things better, faster and cheaper than anyone else can do them. That got us thinking about the topic of this article, because the comparative number of Google results one receives upon searching “artificial intelligence” (AI) plus most other topics far outweigh the results regarding AI and the wealth management space. The scarcity of the commentary on this subject made us start thinking about how AI would impact the wealth management sector. In this article, we look at how certain areas of the wealth management sector may be affected by AI.

If one would ask 15 different people what AI actually is, we think you would receive as many answers as people asked. According to various literature: AI is the natural progression of the method in which computers think, such that the programming is no longer “if, then” programming, but rather, it allows the computer to design and develop cognitive analysis based on the information provided. In effect, the computer learns based on past experiences and the data presented in order to achieve a better result. In fact, AI is not new; in many areas, it has existed in one form or another for nearly 30 years. Using the legal workplace as an example, 40 years ago, 80 percent of what a young lawyer did was help figure out what the law was by researching the law, then about 15 percent was being able to make the work concise. Today, 90 percent of the work is analyzing and articulating the law and conveying it in a simple manner because the information can be found very easily online in a matter of seconds, minutes or hours.

Probably no single area causes more frustration for clients and employees than the compliance function in a financial institution. First of all, many people perceive the relevant compliance questions to be rather technical and confusing. Second, it has become almost a rote form of information gathering and random checks to confirm that the information is, in fact, correct; AI will change that. It will be able to assess many issues like “world check” in a simpler and more efficient manner. AI will automatically search the Internet for data, then obtaining items like passports, identity cards or utility bills will be the most minor of functions. However, AI will allow everything to be referenced constantly and simultaneously by a computer that doesn’t sleep and has full access to data at all times. This will have some significant benefits in the sense that it will shift the burden from the collection of the data to the analysis of it, thereby yielding a better result. Notwithstanding this, it may be possible that computers could, at some point, start assessing the probative value of the information, which could result in improper conclusions.

Take the example of the following fact pattern: A client who is well respected, but is in a highly regulated industry, may have been sanctioned by one or more regulators over the years. That result will give the appearance of a person who has significant issues, but in effect, the weighting of the source or the significance of the source by such apparently adverse history may not be of value. We have a client who had some bad press, and, for us, inappropriately so. Unfortunately, sifting through the mass of data on the Internet to locate meaningful information is extremely difficult, if not impossible, and a searching algorithm based upon AI may lack the “human” heuristics necessary to yield appropriate results. Thus, AI will have the benefit of making many forms of compliance more efficient, smarter and safer, but it will have certain negative consequences. Another area where this will also have a similar effect is in the context of the common reporting standard. As more and more countries adopt the common reporting standard, and data gets shared between more and more entities, AI should be able to sort the data not only based upon where someone declares their tax residency to be, but also based on actual patterns of communication between the bank and the customer, to determine whether that residency information is correct and verifiable, or if change is needed.

To date, the monitoring of cross-border regulatory issues is designed by and dealt with through compliance. Regulatory schemes can certify what relationship managers are doing on a trip, a process used to mitigate exposure, and monitor a relationship manager’s minutes of calls and meetings. This is obviously a highly flawed system that only obtains a nominal amount of the information. Further, it’s fully dependent on the relationship manager telling the truth, which may be inaccurately reflected in a file note.

With AI, the system will be able to review and confirm information on a regular basis to gather information from both direct and indirect sources as to what’s happening, and to detect events taking place in such a way so that appropriate cross-border structures are ensured. However, the problem that will continue to remain is that there could be misinformation gathered which will require human clarification; this will be a major issue going forward.

Suitability, the concept of what should be the types of products purchased by a client, will of course be impacted by AI. Instead of being driven by what the client certifies, product offerings will be carefully tailored and specifically developed to mirror a client’s risk appetite, based upon the client’s actual purchases, actual conversations (as recorded online) and other written communications. Unfortunately, this may result in various differentials between the way the portfolio is invested versus how suitability may require. This, in turn, could actually lead to greater litigation in the future.

Will the computer, particularly AI, eventually replace the individual? We would postulate no, because at the end of the day, AI would need to be able to understand things like a child out of wedlock or a lover or other types of issues. Honestly, we don’t know, but what’s clear is that it will be quite a long time before computers can replace the natural function of individuals. However, there will be incredible pressure on many people to discourage the use of human beings and to replace them with a computer because the tax (and other) savings will be incredibly significant. Whether that happens in the short-term or long-term is a different issue.

Is Change on the Horizon?