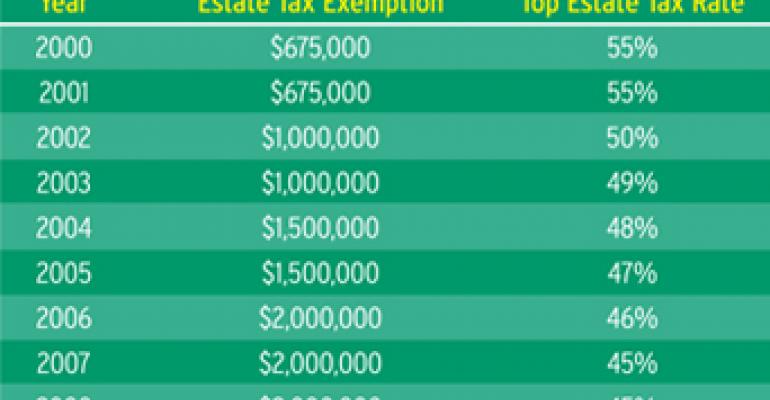 The Age of Uncertainty

While Congress is preoccupied with other matters, legislation reforming estate taxes remaind stalled. What should advisors be discussing with their high-net-worth clients to alleviate some of the uncertainty?

And that's a problem, because we are nearing the expiration, or “sunset,” of the Economic Growth and Tax Relief Reconciliation Act of 2001 (EGTRRA). As part of the 2001 legislation, Congress gradually increased the federal estate tax exemption from $1 million in 2002, to the current high of $3.5 million for 2009. Beginning on January 1, 2010, the exemption is essentially unlimited because the federal estate tax will be repealed. However, if Congress takes no further action in this area, the changes to the federal estate tax enacted under EGTRRA will expire on January 1, 2011 and we revert back to pre-2001 tax laws, resulting in a $1 million exemption for 2011, and thereafter.

Many observers have been predicting that Congress would end all this uncertainty by extending the current $3.5 million exemption and the 45 percent tax rate beyond 2009, possibly indexing the exemption for inflation. Until very recently, there seemed to be a sound basis for this prediction.

During last year's Presidential campaign, candidate Barack Obama proposed extending the 2009 estate tax rules into 2010 and beyond. The first budget proposal President Barack Obama sent to Congress on February 26, 2009 included a 10-year revenue projection indicating that the estate tax exemption would remain at the $3.5 million level through 2019.

There also appeared to be ample support in the Democratically-controlled House and Senate for President Obama's proposal to extend the 2009 estate tax rules beyond 2009. On January 9, 2009, Rep. Earl Pomeroy (D-ND) introduced H.R. 436, also known as the Certain Estate Tax Relief Act of 2009, which proposed making the $3.5 million estate tax exemption (without indexing) and the 45 percent tax rate permanent, but would restore a surtax on larger estates over $10 million.

On March 26, 2009, Senator Max Baucus (D-MT) (and current Chair of the Senate Finance Committee) introduced Senate Bill 722, also known as the Taxpayer Certainty and Relief Act of 2009, which includes an extension of the $3.5 million estate tax exemption (inflation adjusted) and the 45 percent tax rate beyond 2009.

Despite these proposals, no action has been taken by Congress on the estate tax issue so far this year, and with the health care debate and the war in Afghanistan dominating the current political agenda, major tax legislation before 2009 ends seems increasingly remote.

The latest rumblings coming out of Washington are that Congress is preparing to ward off the impending temporary repeal of the estate tax with a one-year “patch” extending the 2009 estate tax laws for one year through the end of 2010. Presumably, a one-year patch would give Congress additional time to tackle estate tax reform as part of more comprehensive tax reform legislation in 2010.

Several factors come to mind when considering what impact a one-year patch might have on the dynamic politics surrounding the debate over federal estate taxes. First, the national economic outlook is dramatically different in 2009 than it was in 2001. When the 2001 tax legislation was being debated, the country was still riding high on the strong economy of the 1990s and expectations were that there would be budget surpluses for years to come. Even as late as spring 2001, the Congressional Budget Office (CBO) was projecting budget surpluses in the $300 billion range. In contrast to that rosy outlook, the CBO is currently projecting a federal budget deficit of a staggering $1.6 trillion in 2009, and annual federal deficits are projected to remain above $500 billion through 2019. This factor suggests that it may be optimistic to hope that a $3.5 million exemption will be extended into 2011.

On the other hand, it is worth noting that another bill recently voted on in Congress may facilitate the extension of the $3.5 million estate tax exemption beyond the one-year patch. H.R. 2920, also known as the Statutory Pay-As-You-Go Act of 2009, specifically excludes the federal estate tax from the requirement that new laws that decrease federal revenue be offset by mandatory spending cuts in federal spending programs. In other words, H.R. 2920 exempts from the so-called pay-go restrictions the extension of the estate tax laws at their 2009 levels, including the current $3.5 million estate tax exemption. H.R. 2920 passed in the House of Representatives by a roll call vote of 265 in favor, 166 opposed, and 3 present, but not voting. H.R. 2920 seems to offer some hope that estate tax laws could be locked in at their 2009 levels for 2011 and beyond.

What To Do Now?

What should advisors be discussing with their high-networth clients to alleviate some of the uncertainty described above? Here are a few action items that may be prudent regardless of what changes occur in the estate tax laws after 2009:

Richard A. Behrendt , a lawyer, is a senior estate planner at Robert W. Baird. & Co.