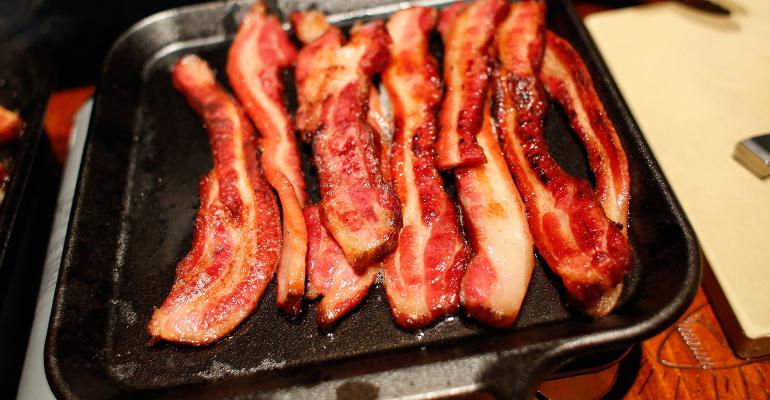 Prices for pork bellies have increased about 80 percent this year, and frozen reserves are at a 60-year low.

(Bloomberg Prophets) --A national bacon craving is forcing up the price of Lean Hog Futures on the Chicago Mercantile Exchange. And the trend appears set to continue.

Prices for pork bellies, the part of a hog from which bacon is produced, have increased about 80 percent this year, and frozen reserves are at a 60-year low. Lean hog futures are the instrument of choice used as a hedge by both producers and restaurant companies, and are also found in hedge funds, commodity indices and ETFs.

U.S. citizens purchased about 14 percent more bacon in stores in 2016 than in 2013, according to Nielsen research. As seen in the table below, year-on-year prices are up about 50 percent on average.

For many years, bacon had been considered a fatty hog byproduct compared with pricier prized cuts. But now bacon fairs are sprouting up around the nation and more people seem to be making exceptions. Bacon is showing up in unlikely places far beyond the breakfast buffet and BLTs. Restaurants are using it to create healthier options such as bacon-wrapped Brussels sprouts and bacon and pineapple on a stick. There also are bacon-topped donuts and bacon ice cream. Seasonally the price rally makes sense as barbecues are fully fired up this time of year. Yet unlike beef, whose demand swells leading up to Memorial Day and July 4, only to drop off around mid-June, bacon is evolving into an all-season consumable. And this voracious demand has left wholesalers in a bind.

Pork bellies typically go into cold storage at the end of the year, when there's excess supply and lower demand. During the past winter, however, robust demand continued for both bellies and bacon and industry supplies were insufficiently replenished. Cold storage is crucial to the industry as excess supplies serve to compensate for the shortfall of fresh product, particularly during the summer when production is low and consumption is high.

The national hog herd rose to a seasonal record of 70 million heads in early June, according to the U.S. Department of Agriculture, but not enough to satisfy demand. December 2016 ended with the lowest supplies of pork bellies in cold storage during any December going back to 1957, when the department began tracking them. The USDA reports stocks falling to 31.6 million pounds in May, down 59 percent from a year earlier and the lowest figure for the month of May. There may be even more sticker shock at markets this summer, as bacon's retail price spike trails the pace of wholesale bellies. In the meantime, long lean hog futures holders should be cautious as the supply situation is expected to ease in the fall due to more expansion in the hog sector.

There's opportunity to capitalize on this rally through equities. According to researcher Mintel, private-label bacon has maintained a market share of about 21 percent fairly steadily over recent years. The balance of the market is controlled by major bacon producers led by Kraft Heinz, which, along with Oscar Meyer, have about 20 percent of the market share for domestic retail bacon. Others include Smithfield, Hormel and Tyson.

It's also advisable to reassess equities of retail food chains. About 80 percent of the top 500 restaurant chains have a bacon item on the menu, according to market researcher Technomic. Even if hedged, these prices will no doubt take a bite out of their bottom lines.