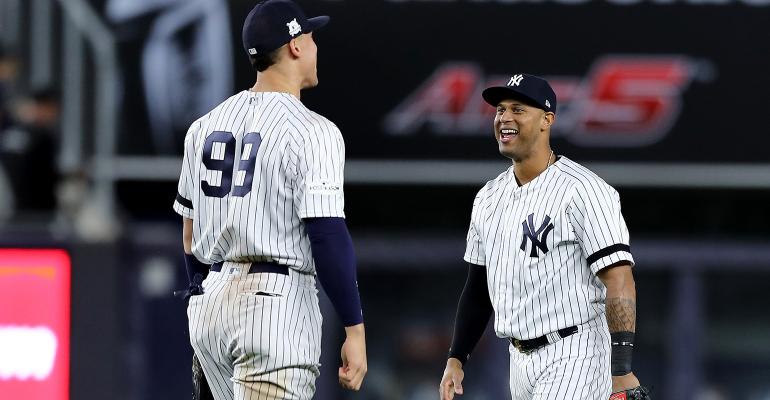 Yankees a Bellwether for Stocks? Fuhgeddaboudit!

Correlations between sports and the markets are misleading, but they often point the way to discoveries.

(Bloomberg Prophets) --The New York Yankees extended their late-season surge  last week, eliminating the Cleveland Indians and moving on to the American League championship series. If they win the series against the Houston Astros -- after a rough start this weekend -- they will advance to their 41st World Series out of the 114 since 1903. And, as many investors and sports fans know, the S&P 500 has averaged more than a 12 percent real return since 1903 over the 12 months after the Yankees made the World Series, versus only 6 percent in other years.

Nonetheless, investors should beware of sports/market correlations. The granddaddy of this metric is the Super Bowl indicator.  It was introduced in a 1978 column  by Leonard Koppett pointing out that every time a team from the old National Football League  won the Super Bowl, stocks went up the following year; and every time a team from the old American Football League won, the market went down. The indicator had worked perfectly for all 11 Super Bowls that had been played at the time. Koppett's point was the silliness of correlations, but the indicator worked for the next 20 years. It then failed four years in a row, but bounced back to be correct 13 of the next 14 years.

In the same column, Koppett related that Major League baseball batting averages went up in years the stock market went down, and vice versa. Koppett thought that hitters got complacent when their stock portfolios were doing well, while pitchers were immune to the influence.  He pointed out that the indicator had worked in 12 of the previous 15 years, when the public was interested in the stock market. The only other time it worked was in the 1920s, another era with stock market focus. Interestingly, this indicator stopped working in the 1974 oil crisis and recession, when investment interest turned to commodities and inflation. But it worked in the mutual fund/internet stock era from 1987 to 1998, stopped from 1999 to 2008, then worked in the good stock market years from 2009 on.

Another well-known anomaly is that countries that win the World Cup enjoy stock market returns that beat global averages the following year. There is an extensive academic literature  on these and other sporting correlations, as well as correlations between markets and weather and other seemingly unrelated news.

The first lesson is that there are many correlations, so it's easy to come up with rules that work in the past. If you try 2,048 useless rules, on average you will get one that predicts 11 of the last 11 years correctly.  And if you go beyond sports to correlate with weather, politics or other events, you can find lots more indicators. Even if you stick to things that seem relevant to finance, like macroeconomic data or legislation, it's no trouble to find rules that work.

The second lesson is that know-it-all math types are too quick to trumpet the first lesson without looking closely at the evidence. Starting in the 1990s, behavioral finance researchers have begun to study sports and weather correlations seriously. Moreover, some of these indicators have impressive out-of-sample performance.  Clearly, that could be coincidence as well, but it forces a closer look at possible mechanisms.

It's not hard to come up with reasons sports and weather might have mild, temporary effects on markets. A World Cup win or a sunny day could put investors and businesspeople in cheerful and optimistic moods, leading to more risk-taking and innovation, leading to better security returns. But a lot of people think security prices are driven by long-term economic fundamentals, so any effect of mood should be small and short-lived.

However, there is another common view, that stimulus is self-sustaining.  If the thrill of victory pushes prices up today, that creates more cheerfulness and optimism, pushing prices up tomorrow. Higher security prices mean lower costs of capital for businesses and consumers, leading to more real activity and profits, leading to higher security prices. In this view, even a small exogenous boost might have measurable effects on long-term returns.

Correlation does not imply causation, so don't use the Yankees' fortunes to dictate your investments. But correlations often point the way to discoveries. If you ignore all correlations you cannot explain immediately, you will never learn anything that surprises you. That's probably bad for your investment portfolio, and it's certainly a dull life.

Aaron Brown is a former Managing Director and Head of Financial Market Research at AQR Capital Management. He is the author of "The Poker Face of Wall Street."