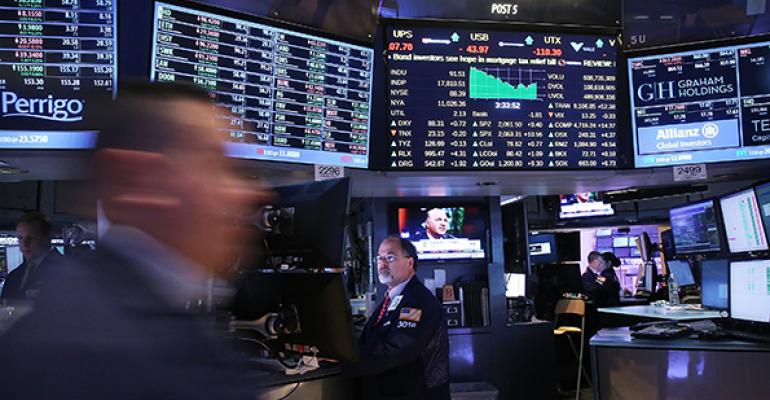 (Bloomberg) -- MSCI Inc. isn’t usually a name that springs to mind when one thinks of the most powerful players in the global equity market.

The New York-based index compiler doesn’t have BlackRock Inc.’s trillions under management, Morgan Stanley’s army of financial advisers or UBS Group AG’s storied history. At $7.7 billion, MSCI’s market value is too small to crack the top 300 of global financial firms, and its payroll of about 2,700 pales in comparison to that of Franklin Resources Inc., one of America’s biggest fund managers.

Yet thanks to the surging popularity of passive investing, MSCI and a handful of its rivals -- including FTSE Russell and S&P Dow Jones Indices -- are quietly replacing the giants of money management as the most important arbiters of where the world’s stock investments flow. The average proportion of equity funds in the U.S., Europe and Asia that mimic index providers’ security and country allocation decisions has doubled over the past eight years to about 33 percent, according to Morningstar Inc.

That growing heft was on full display this year in China, where authorities enacted some of the nation’s most far-reaching market reforms in hopes of gaining entry into MSCI’s global stock gauges last month. The country’s ultimately unsuccessful campaign cemented the index compiler’s status as one of the few companies worldwide with the ability to influence the policy decisions of China’s ruling Communist Party.

“They have an awful lot of power,” said George Cooper, the chief investment officer at Equitile Investments Ltd. in London. “Fund managers and investors are slavishly following these indices.”

Index providers aren’t stock pickers in the same sense as active money managers, who attempt to beat the market by choosing only the best securities. Most of the criteria used by MSCI and its peers are measures of investability, such as market capitalization and daily volume, rather than anything purporting to generate above-average performance.

The index firms say they’re merely channeling the collective feedback of their clients, who include active investors using benchmarks to gauge relative performance and passive managers who need them to deliver the market return.

“International investors will not blindly follow any decision we make,” Mark Makepeace, the London-based chief executive officer of FTSE Russell, said in an interview.

But there is a degree of subjectivity that goes into developing a benchmark index, particularly when deciding on contentious issues, such as which countries to classify as developed, emerging and frontier.

MSCI’s decision to leave domestic Chinese equities out of its global gauges in June surprised many forecasters, while its upgrade of Pakistan to emerging-market status the same month sent shares in Karachi surging to a record -- a sign that investors had failed to price in the move. MSCI didn’t respond to requests for comment for this story.

Beyond market classification decisions, stocks routinely rise or fall when index providers announce even small adjustments to their most widely-followed gauges. The decisions are so important that some brokerages, including Societe Generale SA, have analysts dedicated to helping traders predict when securities will be added, deleted or see their index weightings change.

Index providers are also starting to encroach on the traditional turf of active managers with the rise of “smart beta,” an investing style that uses gauges built around factors other than market capitalization. Assets in smart beta exchange-traded funds will probably climb to $1 trillion by 2020 from $282 billion at the end of March, according to BlackRock, the world’s largest money manager. MSCI, FTSE and S&P Dow Jones all have indexes that use factors such as volatility, dividend yield and momentum.

“The index provider is becoming more of a stock picker,” said Rodney Comegys, head of investments for Asia Pacific at Vanguard Group, which oversees more than $3 trillion in mostly passive funds. “In some ways, they’re replacing the active manager.”

Bloomberg LP, the parent company of Bloomberg News, competes with MSCI and others by compiling indexes and providing analytics for stocks, bonds and commodities.

Indexes have played a key role in stock markets since the days of Charles Dow, who created the Dow Jones Industrial Average in the 1890s to track blue-chip U.S. stocks. What’s different now is that the gauges no longer just serve as a yardstick for money managers, they’re increasingly being used to determine the makeup of investor portfolios via index-tracking mutual funds, exchange-traded funds and derivatives.

The shift toward passive investing in equities, which emerged with John Bogle’s Vanguard 500 Index Fund in the 1970s, has accelerated in recent years as traditional stock pickers lagged behind their benchmarks and volatile markets refocused investor attention on the costs of active management.

Global passive equity funds and ETFs, which charge fees as low as 0.01 percent, attracted $227 billion of net inflows in the 12 months ended June 15, versus $92 billion of outflows for active funds, which have an asset-weighted management fee of 0.62 percent, according to data compiled by Bloomberg on funds with at least $300 million of assets.

Passive investments are becoming more important in the bond market, too, though they still make up just 15 percent of funds in the U.S., Europe and Asia on average, Morningstar data show.

“We expect that the growth of passive investing will remain strong,” Alex Matturri, CEO of S&P Dow Jones Indices in New York, said by e-mail.

One concern about the spread of index-tracking investments is that they’ll create market distortions, with money moving into or out of shares because of their status in key indexes, instead of anything to do with the securities’ underlying value, according to Equitile Investments’ Cooper.

“This can lead to a problem where the markets are not anchored by fundamentals,” said Cooper, who chooses stocks without regard to their index weightings.

“We’re perversely happy with powerful indices,” said Young, a Singapore-based managing director at Aberdeen, which oversees about $420 billion. “They ignore the qualities we look for.”

If the index providers want to protect their expanded role in modern equity markets, they’ll need to juggle competing pressures from shareholders, clients and governments, according to Benedict Cheng, managing consultant at GreySpark Partners, a capital markets consultancy.

“When it comes to decisions that influence trillions of dollars and future investments for a country, there is bound to be lobbying,” Cheng said.

With the China assessment, MSCI said it tried to consult with investors overseeing a majority of the roughly $10 trillion of assets benchmarked to its indexes. The firm published consultation papers on the proposal, formed a working group with the local securities regulator and issued press releases to update investors on the nation’s progress.

Policy makers in the world’s second-largest economy moved to address at least nine of MSCI’s concerns for entry -- including revised rules on trading halts and relaxed curbs on investor withdrawals -- though the firm ultimately concluded that the country had more work to do. MSCI’s announcement came two days after a senior Chinese official called inclusion a “historical certainty” at a panel discussion in Shanghai.

“Countries who want to expand and deepen their own financial markets by seeking global capital flows have to submit to what is required,” said Scott Colyer, CEO of Advisors Asset Management in Colorado. “China is asking MSCI for inclusion. MSCI has no obligation to oblige.”