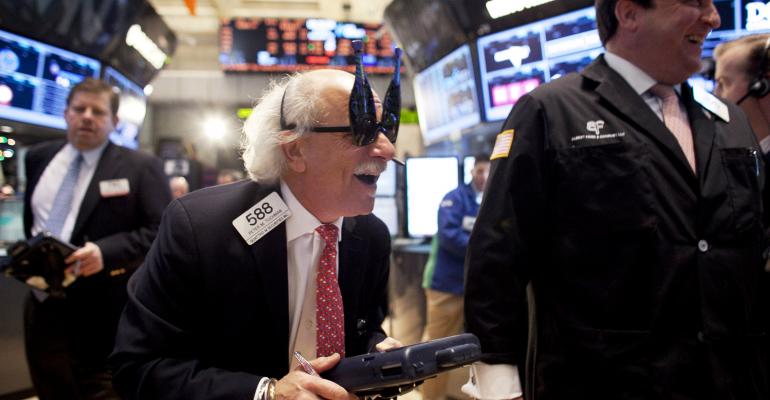 Why ‘Teflon-Like’ Global Markets Are Resisting the Bears

Nothing can keep the markets down.

In recent months, markets haven’t just climbed a wall of worry spanning geopolitical risks to the end of a multi-decade bull run in bonds, they’ve vaulted over it.

“This is the amazing Teflon-like market,” said Matt King, global head of credit products strategy at Citigroup Inc. “Nothing sticks whatever you throw at it.”

For now, markets are betting that an upturn in projections for U.S. output and corporate earnings will offset the negative impact of higher Treasury yields, which have been fueled by expectations of looser fiscal policy under President-elect Trump.

That confidence belies the flood of warnings in recent years that extraordinary monetary stimulus from central banks triggered capital mis-allocation across the developed world that will leave investors nursing trillion-dollar losses on their bond portfolios.

“In recent years, every time markets have wobbled -- posing a threat to the economy -- we have rallied back,” King explained.

So why, exactly, are markets still partying when the punch bowl is running out?

One reason for sanguine sentiment is intuitive: the advance in government bond yields remains relatively modest. Yields on the benchmark 10-year U.S. Treasury note are around 2.33 percent, lower than the 2.60 percent notched in mid-December as markets take a breather from a key consensus trade that bond prices will fall this year.

In a reversal of favored Trump trades, the yields fell to a six-week low on Thursday, and the dollar was under pressure as markets digest the president-elect’s first press conference, where he provided no details on stimulus plans.

Still, yields are notably higher than the 1.78 percent posted in early November at a time when inflation pressures are building up.

With stretched valuations on government bonds in the developed world leaving little margin for error, and fears the 35-year bond bull run will leave investors worse off than the 1994 ‘ bond massacre,’ markets appear eerily calm.

“Whilst this feels like a big move in yields, it’s still relatively minor and the capital losses for investors are not huge,” said Jim Leaviss, fund manager at M&G Investments, referring to U.S. government bonds.

U.S. yields rising from 2.35 percent to 3 percent would equate to a 5.7 percent capital loss for investors, he calculated. While markets aren’t pricing in a 3 percent handle on the 10-year note until the second quarter of 2018, even that loss could be manageable for a host of market players such as pension funds, whose liabilities benefit from rising long-dated yields, Leaviss added.

Marty Young, fixed-income analyst at Goldman Sachs Group Inc., said record foreign ownership of the U.S. debt market helps explain why the prospect of capital losses on government bonds isn’t threatening wide-spread financial disruption in the U.S. Foreigners own 27 percent of outstanding U.S. debt, according to Goldman, with mainland China and Japan the largest foreign investors in the Treasury market.

“After the crisis, there’s been a ton of issuance and a big rise in long-maturity notes in the marketplace,” Young said in an interview. “That, in theory, poses a big risk for investors as yields rise. However, the structure of the investor base makes a big difference.”

Those long-duration bonds are held by a clutch of official-sector investors, who are liberated from the obligation to post mark-to-market losses on their exposures, while large owners of short-dated obligations, such as banks, have stronger capital cushions than in the past, Young added.

That’s just as well. An increase in interest rates to the tune of 100 basis points could inflict a $1.1 trillion loss to the Bloomberg Barclays U.S. Aggregate Index, representing a larger loss for bondholders than at any other point in history, Young calculated back in October. He noted that duration risk was at an all-time high.

Goldman analysts in a report this week calculate a capital loss of $256 billion for every 30 basis point increase across the U.S. Treasury yield curve

Meanwhile, an improving economic backdrop that’s expected to boost companies’ earnings, and by extension the market for corporate bonds, could help offset capital losses on government debt this year, Young said. That juiced returns for U.S. bond investors last year even as government bond prices fell in the last quarter.

A number of market technicals also look benign: investors are cash-rich after the credit rally, while the outlook for net supply in U.S. investment-grade debt is expected to be limited despite January’s bumper crop of fresh corporate bond sales.

What’s more, a rise in global equities may offset losses on government bonds for investors with mandates to invest in multiple asset classes.

But for Citi’s King, market technicals and the potential for more fiscal stimulus in the U.S. are over-hyped reasons to justify the rally.

Central banks continue to distort fundamentals in credit and equity markets, he said, raising the risk of a violent selloff once markets price in the prospect of diminishing central bank support. For example, spreads continue to tighten despite an uptick in policy uncertainty and rising leverage, he noted. The culprits are the European Central Bank and the Bank of Japan, who have taken over from the Fed as providers of global liquidity -- a boon for spreads, he said.

This view is borne out by fixed-income analysts at Deutsche Bank AG, citing the U.S. term premium, or the extra compensation investors demand to hold longer-dated notes relative to shorter-dated obligations.

Beyond the five-year maturity, the term premium remains “relatively low” compared to rising market-implied expectations of inflation, reflecting a “market that is reluctant” to price in a reduction in quantitative easing in the euro-area, analysts led by Dominic Konstam wrote in a note this week.

At some point, higher yields on high-quality fixed income assets should reduce the incentive to snap up riskier assets to inflate returns, said King.

Once that happens, it could be a game-changer for markets.

“Once investors start asking questions about the relative value on government bonds, you could see a significant selloff that would have a negative impact on the real economy by tightening financial conditions,” he said.

The line in the sand to watch out for? King suggests this dynamic could kick in once inflation-adjusted U.S. 10-year yields reach 1 percent, compared with 0.4 percent currently.

With inflation expectations still well-anchored, bearish sentiment might continue to bounce off the “Teflon-like” market rally for a good while longer.