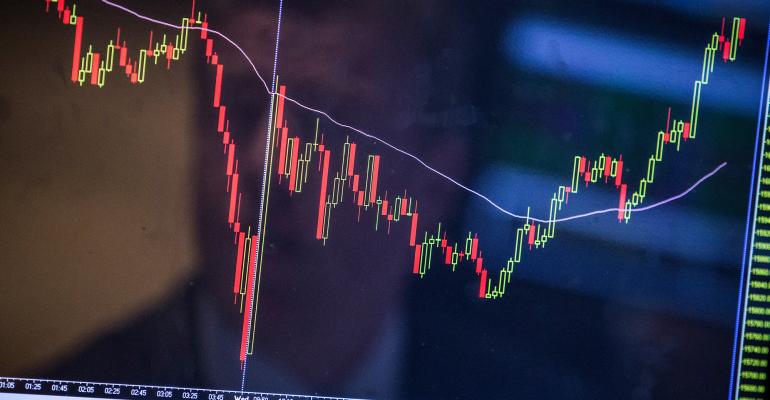 Why Stocks Took a July Vacay From Fundamentals

A discouraging economy took a backseat to technicals and relative valuations. Inflation will have a lot to say about how long that lasts.

(Bloomberg Opinion) -- July was an illustration of the adage that “the market is not the economy.” US stocks had their best month in two years while the economy received discouraging news about both growth and inflation. But rather than illustrating another adage — “bad news is good news” — the contrast is a reminder that economic fundamentals are one of three main drivers of asset prices, and their influence varies over time.

With a return of 12% in July alone, the Nasdaq Composite Index recovered more than a third of the loss incurred in the brutal first half of 2022. The other, less volatile indexes also had a strong month, reducing the year-to-date losses to 10% and 13% for the Dow Jones Industrial Average and the S&P 500 Index respectively.

The good news did not extend to the economy. On the contrary in fact.

July was full of worrisome news about sky-high inflation (9.1% as measured by the consumer price index for June), negative GDP growth (-0.9% for the second quarter), a drop in real incomes and diminished household savings. Company after company warned that the damaging impact of inflation on their costs was now increasingly accompanied by worries about revenue as rising prices destroyed demand for some goods and even services, though less so for now.

Politicians, as opposed to the majority of economists who take a more holistic definition of the concept, debated loudly whether the US is in a recession. With Google “recession” searches already surging, this added to the likelihood of a more cautionary spending approach on the part of both households and businesses — this as the Federal Reserve’s preferred inflation metric, the personal consumption expenditures price index, rose to a level not seen since January 1982.

It’s no wonder the Fed, scrambling to control the policy narrative and seeking to limit more harm to its already-damaged credibility, raised interest rates 75 basis points into a weakening economy — when markets increasingly priced in the likelihood of a rate U-turn in 2023 because of a Fed-induced recession.

The concerning news was not limited to the US economy. It was also global.

In its periodic update of its world economic outlook, the International Monetary Fund described the global economy’s prospects as “gloomy and more uncertain.” The IMF cut its growth projections for 2022 by 0.4 percentage points to 3.2%, a significant amount for a mid-year revision, and by 0.7 percentage points to 2.9% for 2023. It also revised up its inflation forecasts and warned of possible financial and debt problems.

Having worked at the fund for 15 years earlier in my career, I can assure you that officials there do not use words such as “gloomy” lightly. And the words are appropriate given that this weekend’s contractionary data for China’s manufacturing sector confirmed that all three systemically important regions in the world — China, the euro zone and the US — are slowing significantly at the same time.

One interpretation of the striking contrast between the economy and markets in July is that the bad economic news will lead the Fed to pause its monetary tightening early and then lower interest rates quickly and perhaps even suspend its plans for balance sheet contraction — thereby returning to a policy pattern that, for years, loosened financial conditions and drove asset prices higher. Indeed, stocks had their biggest ever post-Federal Open Market Committee rally as traders responded to Fed Chair Jerome Powell’s unscripted remark that interest rates are at “neutral” — a comment that, inconsistent with Powell’s other remarks at that press conference, contributed to a general chuckle when, later in the press conference, he said that the Fed did not want to contribute to market volatility.

A majority of economists questioned Powell’s unscripted remark. From an economic, institutional and market perspective, it would have been much better for Powell to stick to the script given to him rather than venture into a statement that Larry Summers, the former Treasury secretary, described on Bloomberg Television as “analytically indefensible” and “inexplicable.”  Yet having gone unscripted, Powell’s analytical slip served as a spark for markets that have been conditioned by years of huge and predictable Fed liquidity injections.

It should come as no surprise that markets are so sensitive to any hint of a return to the uber-stimulative, liquidity-abundant policy regime. Yet high and potentially sticky core inflation greatly limits the Fed’s ability to pivot back to such a regime any time soon.

There is a better way to think about July’s contrast between the market and the economy, one based on the view that asset prices are sensitive to three general influences: fundamentals, including the economy’s impact on corporate earnings; technicals, including the amount of overall liquidity in the system, cash in investment portfolios and general level of risk-taking; and relative valuations, be they historic or intra-asset class. The latter two influences drove the July rally in the face of deteriorating fundamentals.

Given the amount of liquidity that has been injected in recent years, a lot of it is still sloshing around. The level of cash holdings by investors has been high, and the willingness to take risks is still considerable once a green light flashes on.

All this comes when equity valuations have become more attractive, with some particularly prominent individual stocks, albeit a relatively small set, trading at strikingly cheap levels. Stocks have also benefited from the widening market belief that, with the economy slowing so rapidly, bond yields had fallen in the last month and a half to levels that are notably less attractive, especially with such high inflation.

This is not to say that fundamentals will have no influence going forward. A lot will depend on the answer to two questions: How sticky will inflation be on the way down, and how deep will the possible recession be, neither of which can be answered yet with a great degree of confidence.